Valentino Rossi’s dramatic switch from Honda to Yamaha, and the instant turnaround in the manufacturer’s fortunes as a result, is the focus of our latest MotoGP podcast. 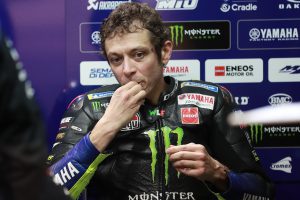 MotoGP technical guru Neil Spalding joins Toby Moody to revisit how Rossi and key Yamaha personnel turned a two-year plan to win the world championship into a debut victory and title success at the first attempt in 2004.

As well as recalling their memories from being in the paddock when Rossi announced he was leaving the dominant force in MotoGP’s then-new four-strike era, they explain in depth how the technical battle was shaping up between Honda and Yamaha early in the 21st century.

48 mins ago Formula 1 No Comments