Moto3 rider ‘lucky to be alive’ after cutting neck at Jerez

Tech3 KTM Moto3 rider Deniz Oncu has admitted that he’s “lucky to be alive” after his last-corner fall in today’s Spanish Grand Prix at Jerez.

The Turkish rider went down in the final metres of the race, taking fellow KTM rider Jaume Masia and Petronas Honda’s Darryn Binder with him, only to have Binder’s front brake disc slice his neck as they tumbled through the gravel.

Posting a photograph of his injury on social media afterwards, Oncu says that he feels he’s lucky to have escaped relatively unharmed from what could have been a tragic freak accident. 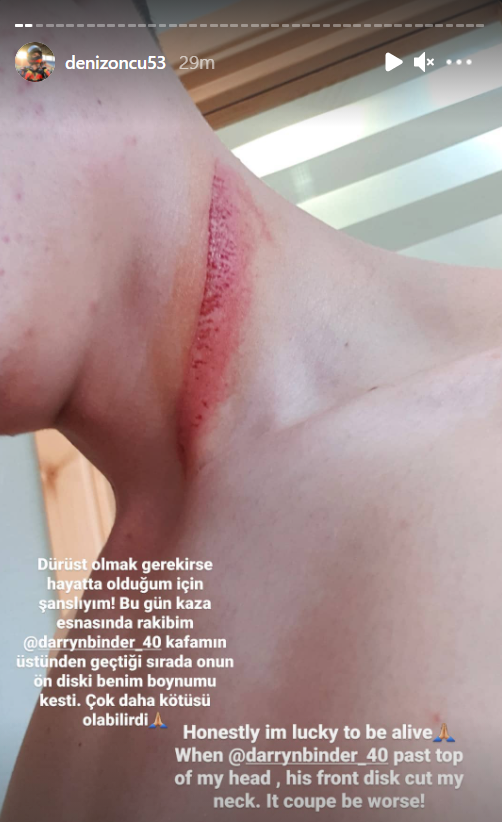 “I was braking like usual,” Oncu explained of the crash in the team’s press release, “but I couldn’t bring the bike to the first gear, so I was just sliding in the second gear, tried to stop the bike, but just hit Masia and made him crash as well. I’m really sorry for him!

“We had such a great weekend, I have been working so hard and finally, I crashed in the last corner, which was very painful – not physically.”

“Honestly, I’m lucky to be alive,” he added later on Instagram. “When Binder passed the top of my head, his front brake disc cut my neck. It could have been worse!”

“In the final corner I just had nowhere to go,” said Binder of the fall, “and was cleaned out by another rider who crashed. I’m so disappointed and there was nothing that I could have done.” 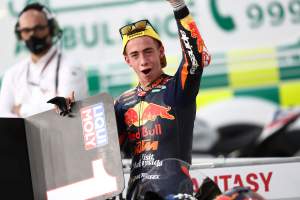 Is this 16-year-old the future of MotoGP?
Read more

The chaos triggered by Oncu – who led 12 laps in the race before his fall – gave runaway championship leader Pedro Acosta a clear path to victory.

It meant the 16-year-old recorded his third win from four races this season, with the rookie sensation becoming the youngest-ever rider to win three races in a row and the first-ever rookie to be on the podium in each of their first four races.

50 mins ago Formula 1 No Comments