Miller’s tirade against Michelin – and why Michelin disagrees

While one works Ducati would probably have been on the Catalan Grand Prix podium had Pecco Bagnaia not been taken out by Taka Nakagami at the start, the second one only just made it into the points for a second MotoGP race in a row.

Jack Miller laid the full blame for that on tyre supplier Michelin, launching an extraordinary outburst against it after the Barcelona race.

Miller, who qualified 11th, ended up riding a lonely race to 14th, losing places early on and ultimately lucky to score points only because of those in front falling off and promoting him up the standings.

However, unlike the weekend prior at the team’s home race at Mugello (where he came home in 15th), he didn’t blame his bike at Barcelona but instead very much singled out Michelin not only for a tough race but a hard weekend in general.

“A s**thouse day to follow up what was this weekend,” he said afterwards.

“Two decent tyres all weekend, and I tried my maximum in the race but to be honest I had nothing on the right-hand side from the beginning until the end, and especially at the end.

“I was [wheel]spinning in a straight line. I don’t know what happened with the hard tyre but it didn’t function. 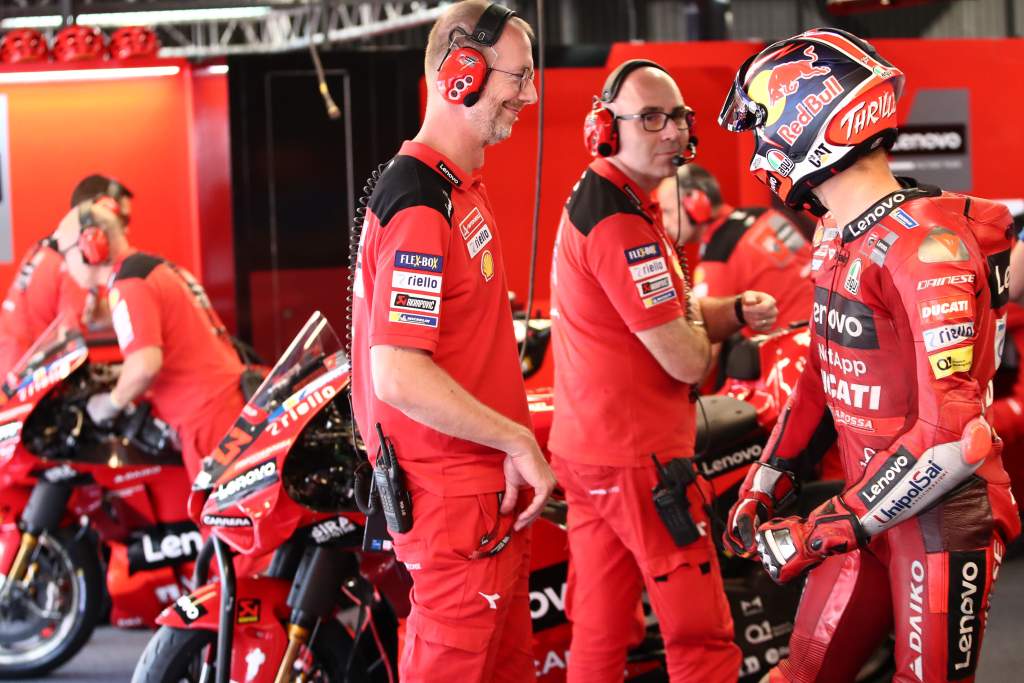 “Last year we were on the podium here, and today I’m f**king 30 seconds away without one single 1m40s lap in the race.

“I don’t understand, really, and we need to analyse. Take the data that we get and understand and get an answer.”

So bad was the situation on Sunday that Miller says he wasn’t even able to ride as fast as he could using the Ducati Panigale road bike he uses for training on a regular basis at the same circuit, only three hours from the Australian’s European base in Andorra. 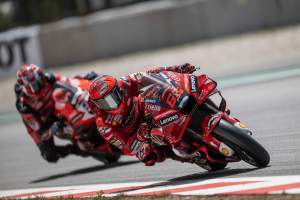 What Bagnaia ‘needs and wants’ from Miller’s replacement
Read more

“I was riding at the end doing laptimes I know I can do with the Panigale with tyres from the shelf,” he explained. “This is not normal, and I didn’t understand what happened this weekend with the tyres, but we had a big problem, clearly.

“One tyre to another feels completely foreign on the bike, but then it can come back again.

“I don’t forget how to ride, I don’t lose my way, and we know the bike.

“It was happening all weekend. We took a gamble in the race with the hard tyre, hoping that it was going to work, because it was really hot and everything like that. But it didn’t.” 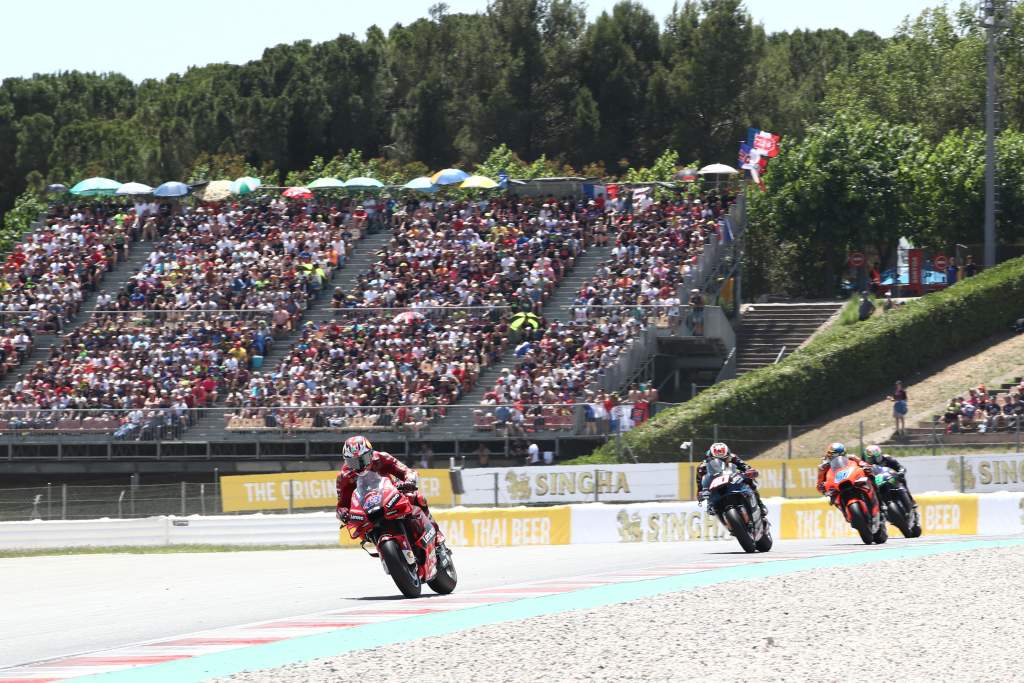 When approached by The Race for comment about Miller’s complaints, Michelin said that after analysis of all his tyres throughout the weekend only the rear he had used during FP4 showed any signs of excessive vibration.

With all the hard tyre users suffering to some extent or another throughout the race, and given the fact that all riders who used the hard rear were slower during the race than they were on Friday and Saturday, Michelin believes the issues Miller faced were more to do with adverse track conditions rather than anything specific on its tyres. The race-winning time was eight seconds slower than last year’s. 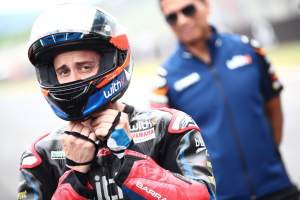 Miller was the only rider who expressed any such issues with the tyres during the Catalan GP weekend.

Andrea Dovizioso did also cite tyre problems, but his came from a very familiar issue in MotoGP at the minute: increasing front pressure after he got caught behind the Honda of Pol Espargaro.

Eventually retiring to the pits after the situation became unmanageable, his issues only presented when he caught the bikes in front.

“Under braking, the front was really bad,” the RNF Yamaha rider said.

“I was locking the front in a straight line and wasn’t able to overtake. 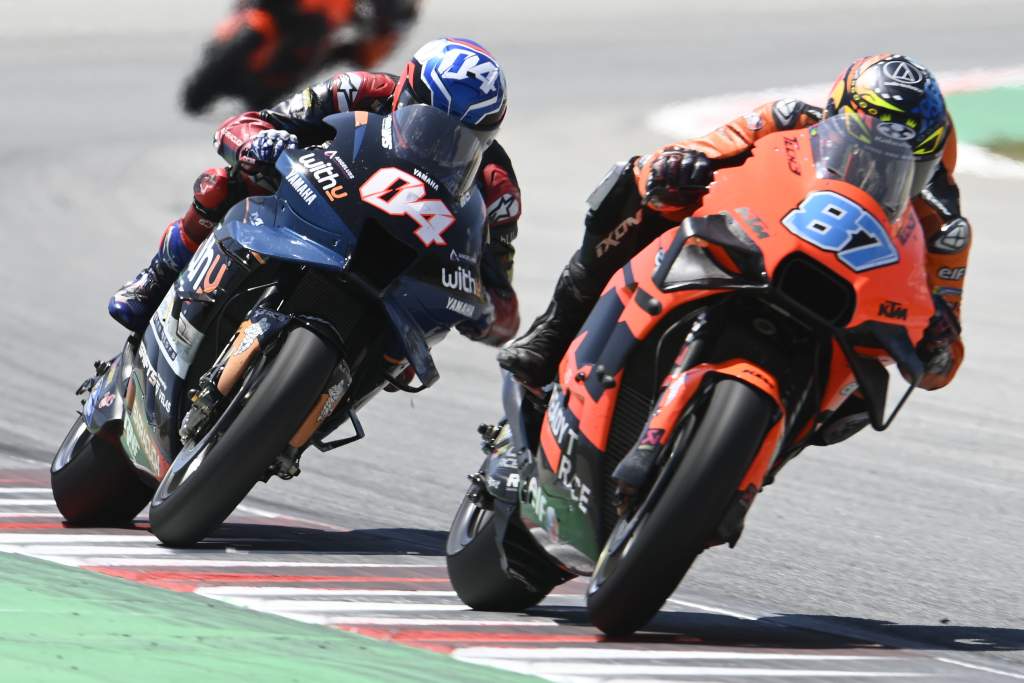 “I’m disappointed because I was able to manage the rear tyre in the right way and I knew I could be competitive at the end of the race.

“I caught the group in front and I was able to fight and maybe overtake them.

“But when I was behind Pol and [Remy] Gardner, I wasn’t able to stop the bike.

“It was a disaster. When you start behind, you really can’t push, do your speed. Everything becomes hard, and it’s easy to take 30 seconds to the leaders.”