Miller ‘never been so desperate’ for better MotoGP form

Factory Ducati MotoGP rider Jack Miller has admitted that he’s still ‘in the shit’ and has “never been so desperate” for his MotoGP season to turn around ahead of this Sunday’s Spanish Grand Prix.

A pair of ninth-place finishes has left Miller 11th in the drivers’ championship after three rounds while his team-mate Pecco Bagnaia is currently second behind the points leader Fabio Quartararo.

In Friday’s second practice session at the Spanish circuit, Bagnaia was fastest but Miller could only manage the 12th quickest time.

“It’s no secret that my goal was to be here winning races already,” he said after the session, “but here we are three races in and I haven’t even been on the podium. We still have a long way to go and a lot more chances left, and for sure I’ve never been so strict with myself. I’m trying everything we can do to turn the ship around and get some momentum coming back my way. 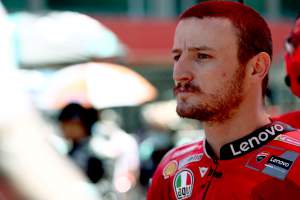 “I’ve never been so desperate to do that in my life. I’ve been in worse situations before, but we’re in the shit at the moment, it’s as simple as that. I struggled in the past three races. Everything is there, the speed is there, and I just need to put it all together now. Time will tell if we’re able to. I’m trying my best.”

It’s been a far from ideal start to the season for the more experienced of the Bologna manufacturer’s two riders – hired in large part to be team leader following the departure of Andrea Dovizioso – especially considering the pace that Bagnaia has displayed on the other side of the garage.

However, while he was rapid during time attack mode at the end of FP2, even Bagnaia admitted that he’s still got something to find tomorrow if they’re to be that competitive come Sunday’s race.

“It’s not very suitable for our bike, but I’ve always found I go very well here with it [the Ducati],” Bagnaia said. “My feeling with the front is very good, and I’m very happy. We know that time attacks are not a problem for me, because I enjoy them a lot. We just have to continue working on the pace because we’re missing a bit.”

In FP2, Bagnaia had a substantial advantage over his fellow Ducatis but he isn’t entirely sure why he’s faster than the rest of the red bikes but believes that it may lie in how he enters the corner.

“I think the difference is that I can brake very hard,” he explained. “I can maybe turn the bike more, and in this moment at tracks like this, it’s better. Sincerely, I don’t know why, but if you look at the data I can stop the bike better than the others. The speed that I have on the entry to the corners is something that allows me to turn the bike more, and at this moment it’s the key.

“When you look at the data, the other Ducati riders have a similar riding style but mine is different. At this moment at tracks like this, maybe mine is working a bit better, but let’s wait to see the differences at more ‘normal’ Ducati circuits.”

However, while Bagnaia might not fully understand where his speed is coming from, his team-mate believes that’s seen this pattern before even if he couldn’t find the secret to unlocking it himself today.

Miller was insistent that it’s something that he’s been able to do in the past on occasion as well, even at circuits like Jerez that aren’t particularly Ducati-friendly.

“It seems that he was able to just pull it out when he needed to today,” he explained, “in the time attack run at the end. If you look at our sector times, we were very similar throughout the whole session, but then yeah when it came to lap times he was able to drop nearly four-tenths in the last sector compared to what he was running at earlier.

“It’s simply because he’s able to let the bike roll and feel comfortable with it, and I wasn’t able to do that today. I lost a lot in sector four, in turns eleven and twelve. It’s a track where I’ve done that before at – I sat in second for most of the race last year, and I can go fast around here.”