May 2 2021
By Valentin Khorounzhiy
No Comments

Jack Miller scored his first MotoGP win since 2016 in the Spanish Grand Prix as a dominant-looking race for Fabio Quartararo unravelled dramatically.

The now-former championship leader looked en route to a dominant third consecutive win of the year – and a third straight win at Jerez – but faded massively in the final 10 laps, paving the way for Miller’s first win as a Ducati rider.

Quartararo in the end tumbled to a painful 13th, and surrendered the MotoGP championship lead as a result. He now trails Ducati rider Francesco Bagnaia by two points.

The sole Ducati on the front row – that of Miller – predictably took the lead off the line, with Quartararo also slipping behind Franco Morbidelli and Bagnaia.

But after finishing the opening lap in fourth the Frenchman reeled off three successive overtakes down the inside of the final corner, Curva Lorenzo, meaning that by the end of lap four he had retaken the lead from Miller.

As Quartararo began to break away, his gap over Miller briefly stabilised at seven tenths, before another push by Quartararo nearly doubled the lead.

But as the halfway point passed Quartararo’s pace suddenly dropped off a cliff, the Frenchman visibly struggling badly on corner entry and soon running laptimes nearly two seconds off the pace. After the race when he returned to his garage, Quartararo appeared to be in severe pain and would not remove his helmet or lift his visor while a TV camera was close by. 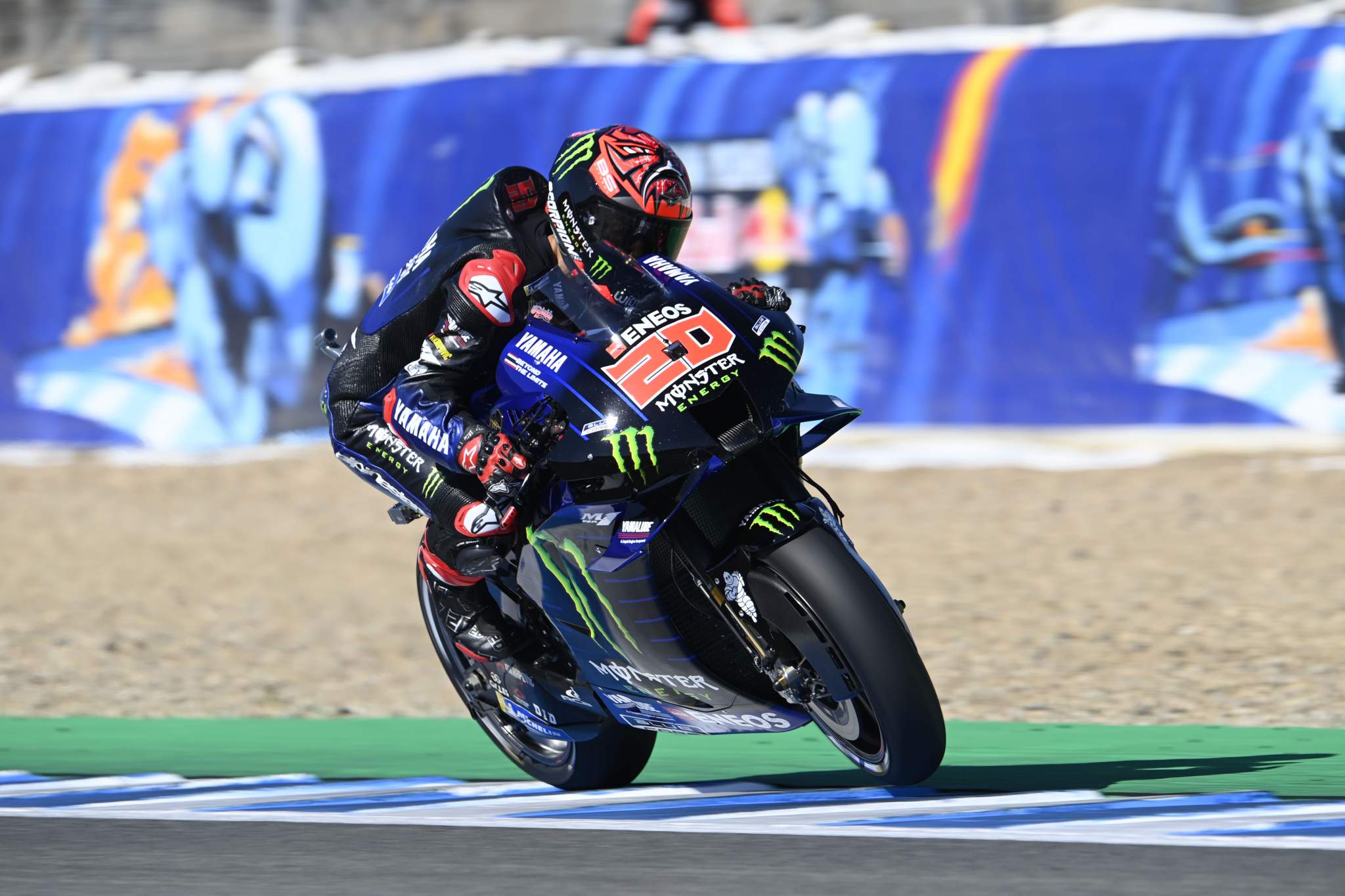 Very quickly he was caught by Miller, who made short work of Quartararo on the main straight and soon took over a comfortable two-second lead despite making an early error in clean air.

By then Bagnaia – who had spent some of the race being stuck behind Aleix Espargaro before getting the move done at Dry Sac – had also taken care of Morbidelli, and a subsequent pass on Quartararo left him two seconds off Miller.

After seeing off an initial counter-attack from Morbidelli, Bagnaia closed to within a second of Miller on the penultimate lap, but had no more to offer, with the Aussie leading a Ducati 1-2 by 1.912s at the chequered flag.

Both Nakagami and Mir took full advantage of Quartararo’s rolling roadblock period to pass Espargaro, who was sixth again for Aprilia.

Miguel Oliveira was the top KTM in 11th. His team-mate Brad Binder was the only representative of the Austrian marque in Q2 on Saturday, but crashed twice during the grand prix, first at Turn 2 and then at the final corner.

His first crash came on the second lap but was already the second of the race, with Alex Marquez (LCR Honda) having fallen on the opening lap.

The other two crashes came from Alex Rins, who had a bizarre slow fall after running out wide at Dry Sac while chasing after Suzuki team-mate Mir, and Avintia Ducati rookie Enea Bastianini.