Dec 14 2020
By Valentin Khorounzhiy
No Comments

Gresini Racing has announced it will cease to operate Aprilia’s factory MotoGP entry from 2022 onwards, and will instead race in the premier class as an independent.

The news is consistent with long-standing rumours that Aprilia was looking to take its MotoGP operation more in house.

Aprilia has been a quasi-independent entry due to its Gresini partnership since it returned to the grid in 2015.

“We’re happy to announce this agreement with IRTA [MotoGP’s teams’ association], which will see us in MotoGP for five years starting from 2022,” team manager Fausto Gresini said.

“We will not be representing Aprilia as a factory team anymore, so we will continue as an Independent Team, doing so with as much will and commitment.

“There’s a lot of work to do and many things to define and communicate. Obviously we’re already working on this huge project, and we will reveal the details little by little. Stay tuned!”

Prior to its Aprilia link-up, Gresini had served as a Honda satellite team and was a genuine frontrunner at the start of the century.

Sete Gibernau was runner-up to Valentino Rossi in the 2003 and ’04 championships with Gresini, a feat repeated by his team-mate Marco Melandri the following year.

Gresini’s last MotoGP race win came with Toni Elias in the famously close 2006 Portuguese Grand Prix, but it continued to notch up podiums with Melandri, Elias, the late Marco Simoncelli and Alvaro Bautista (pictured below) up to its last year with Honda in 2014.

Its time with Aprilia hasn’t yielded any better than a spate of sixth-place finishes so far.

It is not currently clear whether Gresini would look to remain with Aprilia and becomes its satellite team or join forces with another manufacturer. 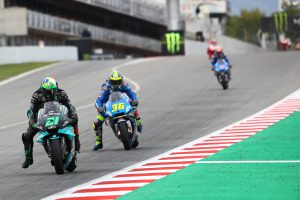 MotoGP is believed to be targeting a 24-bike grid for 2022, which would be a two-entry increase compared to next year, and is thought to want a system in which each of its six manufacturers is supported by a single satellite operation.

Currently, Honda, KTM and Yamaha have one satellite team each, but Ducati has Avintia/Esponsorama in addition to Pramac, while Suzuki and Aprilia are limited to factory bikes only.

Gresini is also represented in Moto2, Moto3 and MotoE (where it won the inaugural title in 2019) in addition to the premier class.

Its 2021 Moto2 line-up comprises Italian duo Nicolo Bulega and Fabio Di Giannantonio, and the latter has been rumoured to have a MotoGP 2022 clause in what is a two-year deal with Gresini.