Marc Marquez was left “scared” by his first big crash since returning to MotoGP after admitting that he didn’t “exactly remember” his high-speed fall during FP3 at Jerez.

Returning to the site of the crash that ended his 2020 season before it really even began, he fell at Turn 7 and collided with the trackside wall at high speed – but says he (and his injured right arm) are completely OK despite the violence of the crash.

Taken to hospital for precautionary checks after the fall, he downplayed them afterwards, admitting that they were more due to physical issues elsewhere on his body than with the repaired break to his right humerus. 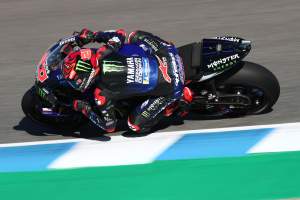 “The arm was not injured – I didn’t feel any pain,” he stressed afterwards. “Doctor Charte has all the x-rays, all the information on my arm, and even today when I went to the hospital we made another one even though I didn’t feel anything wrong with it.

“When I went for the checks, it was more for the neck, the head, the back and the concussion check, because that’s what I suffered more from. I want to clarify – I’m here and I’m riding and I’m pushing because what the doctors have told me now is that in the case of impact, there’s as much chance of breaking my left arm as my right one. The bone is completely fixed.”

The crash does once again bring to the fore MotoGP’s dubious record on monitoring for concussion injuries, however, with Marquez describing textbook symptoms of the condition after the crash as the reason he and the series’ medical team decided further medical analysis was needed.

“I went to the circuit hospital, they checked everything and I felt OK at that moment. Then I went to my motorhome but when I arrived there and sat down for ten minutes, I started to lose my head – to not know exactly where I was. Immediately I called the doctor and told him I had this feeling, and he told me we had to check in the hospital. 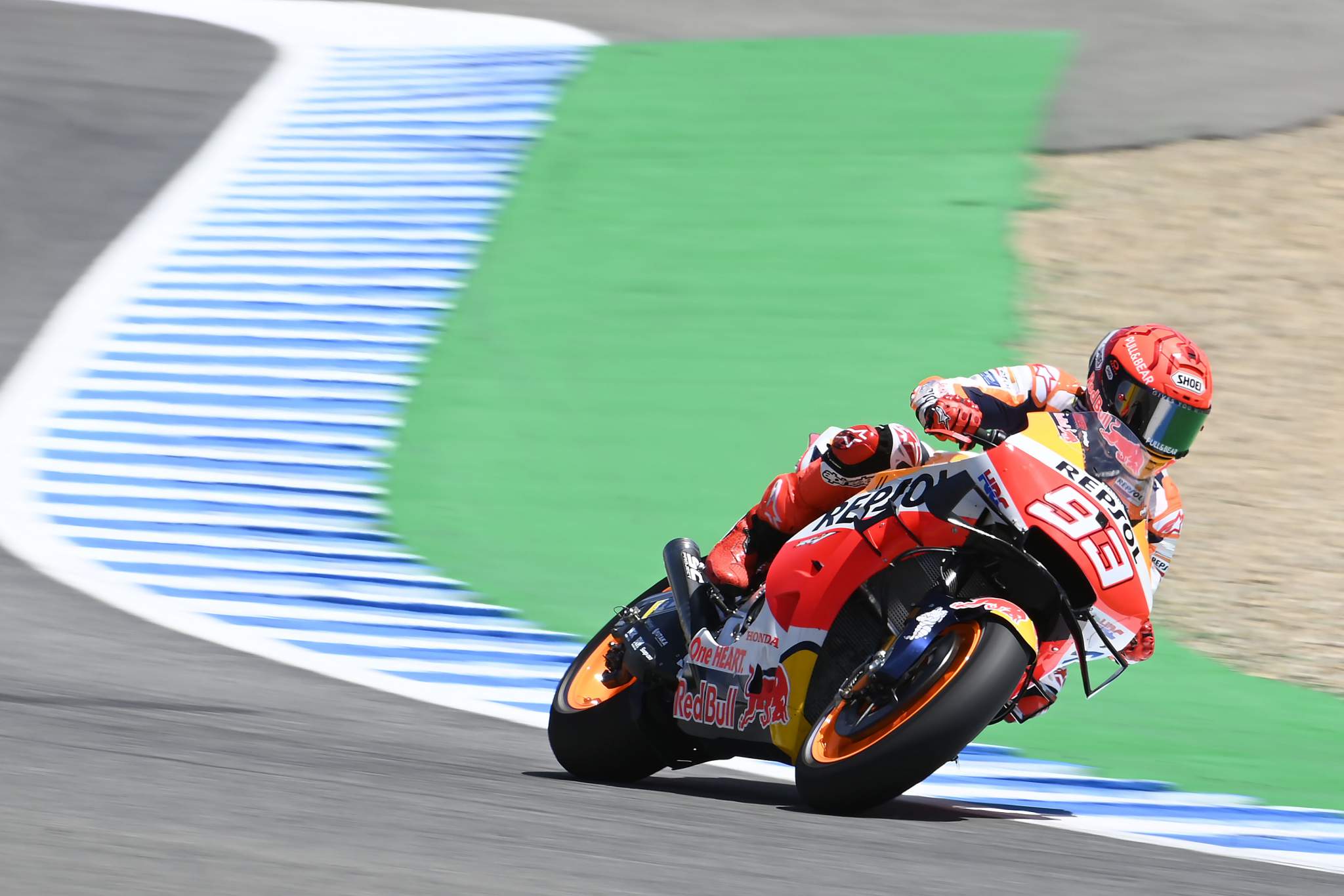 “When I arrived in the hospital I already felt well again, they checked everything, and when I arrived back at the circuit they rechecked it again. I was feeling OK, but immediately when I felt something wrong I called the doctor to be more safe.”

Despite the heavy nature of the fall, the Repsol Honda rider was quick to talk down the seriousness of the crash afterwards, insisting that it was always something that was going to happen and sounding almost relieved to get the fall out of the way during his second weekend back in the championship.

“Sooner or later, we know that the first crash of the season would arrive, but I chose one of the worst places on the circuit to do it,” he conceded. “I didn’t expect it, but when you push for a lap you don’t think about the risk, you just push. Yesterday I was more conservative, and unfortunately, today when I pushed, I crashed.

“It was a big crash, especially the impact against the air fence. It was at high speed, and thanks to the fence I’m here. I was a little bit scared because I didn’t exactly remember what happened, I was in a little bit of a commotion, and because of all these things I went to the hospital for a check.” 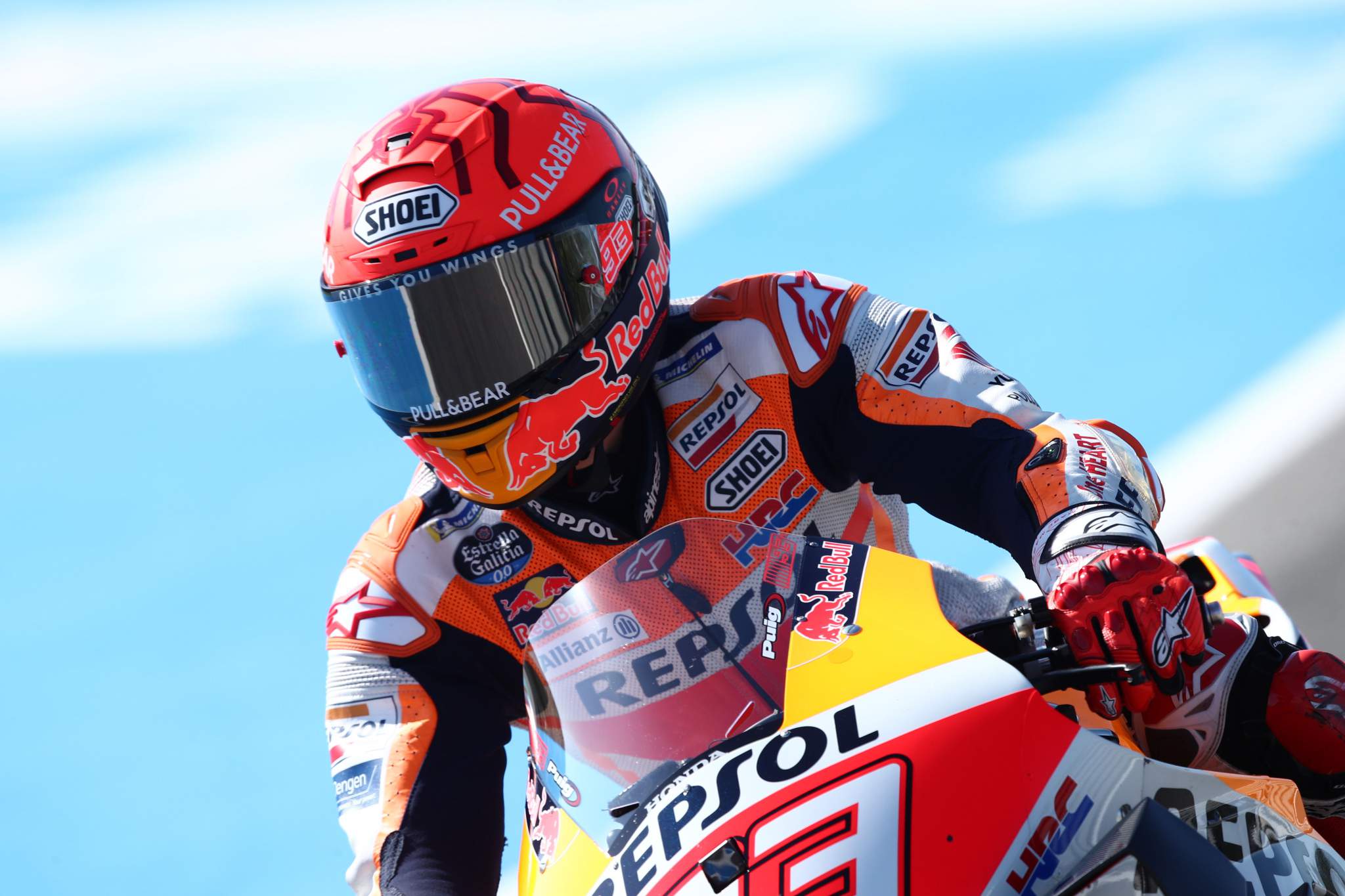 In fact, his main concern afterwards seemed to be that the crash sabotaged his qualifying potential, not through injury but by nudging him and his team in the wrong direction. Forced to go into Q1 and then choosing the wrong tyre, he will start tomorrow’s race from 14th.

“In the afternoon, I was riding in a good way in FP4, but specifically this crash affected me in qualifying,” admitted the eight-time world champion. “I chose the soft front tyre because of the crash, so that maybe I would feel safer in the left corners.

“But we made a mistake because we chose a tyre more thinking about risk than performance. I saw immediately that the front tyre was the limit and when I stopped there wasn’t time to chance. It’s a little bit of a shame because I’ve felt good this weekend and today was the first day where I started to feel the bike again and was riding in a good way.”

He believes he’s finding some of the feeling with his bike that he wasn’t able to last time out in Portugal as his physical condition continues to improve, Marquez is optimistic about his potential tomorrow as the team finally start to refine his base setting on the 2021 RC213V.

“If I don’t ride at the limit then we can’t set up the bike in a good way, and today is the first day that we’ve been able to do that so right away for tomorrow we’ll make some changes. Even if I won’t do many laps in the warm-up, we’ll make changes because I believe I’m missing something.

“We’re using a completely different bike from last year, and the bike I’m riding now needs less physical condition so that I can ride in a better way. I had a few moments this afternoon, but all of them were using the soft front tyre, not stopping the bike, not turning.

“It’s even a different chassis. It’s not easy to change everything from one session to another, but I feel like there are strong points to this chassis and on this setup – but I’m missing a lot how to turn the bike with the rear tyre and that forces the front. I need to understand how to play with the rear because it’s one of my strong points – to pick up the bike and slide it.”