Francesco Bagnaia claimed Ducati’s seventh pole of the MotoGP season in qualifying for the German Grand Prix at the Sachsenring.

Practice standout Bagnaia took the lead early on in Q2, albeit his initial benchmark was immediately followed by him running deep into the gravel at Turn 1. 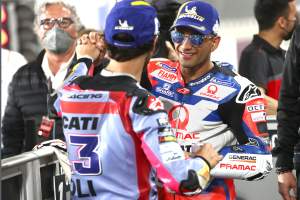 Electing to make his second run on another soft tyre earlier than anyone else, he went quicker still – posting a 1m19.931s – when the track was mostly empty around the midpoint of the pole shootout.

He then headed out for a third run, but started it too late to get another flying lap in – yet this wasn’t enough of a drama to prevent him from claiming pole position.

Championship leader Fabio Quartararo (Yamaha) got closest of anyone to dethroning Bagnaia, ending up 0.076s short in second, with Pramac Ducati’s Johann Zarco completing the front row just a quarter of a tenth down. 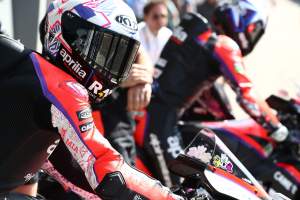 Aprilia’s Aleix Espargaro is set to head into battle from fourth place on the grid, having finished just 0.008s ahead of Gresini Ducati rookie Fabio Di Giannantonio. The latter followed Espargaro on his fastest lap in Q2, having thoroughly dominated Q1.

Bagnaia’s team-mate Jack Miller was only two tenths off the pace but only sixth, his final attempt seemingly thwarted by yellow flags for a Takaaki Nakagami crash at Turn 1.

But Miller may yet face a penalty, having fallen off at Turn 13 shortly after Espargaro’s crash at the same corner during the pre-qualifying FP4 session – with yellow flags appearing to have been still in effect.

The Q2 order was completed by Nakagami, VR46 Ducati rookie Marco Bezzecchi – who progressed from Q1 alongside Di Giannantonio – and Suzuki’s Joan Mir, irate on his GSX-RR after taking the chequered flag.

Honda rider Pol Espargaro came up just 0.004s short of denying Bezzecchi a spot in Q2, having to settle for 13th, ahead of KTM factory duo Miguel Oliveira and Brad Binder.

Oliveira was potentially on course to challenge for Q2 late in the first segment, but made an apparent error at Turn 12, this effectively consigning KTM to a fifth consecutive race of having none of its four bikes in the pole shoot-out.

Gresini Ducati’s Enea Bastianini, a three-time race winner in 2021, was all the way down in 17th, three places up on fellow Italian Franco Morbidelli – the factory Yamaha man suffering his ninth successive Q1 elimination.

The grid will be down to 23 riders for Sunday’s race, with Suzuki’s Alex Rins having withdrawn due to lingering pain in his wrist – which was fractured in a multi-bike Barcelona crash and subsequently operated on.