Jul 24 2020
By Simon Patterson and Valentin Khorounzhiy
No Comments

The 2020 MotoGP season is well underway, with round two kicking off today at Jerez. However, heading into the first ever back-to-back race at the same circuit, the opening day of action at the new Andalucian Grand Prix didn’t quite live up to the hype of seven days ago.

It might not have been the most exciting day ever on track as racers settled back into the rhythm they finished last Sunday’s Spanish Grand Prix with, but there was still plenty of action on track and off it to analyse. 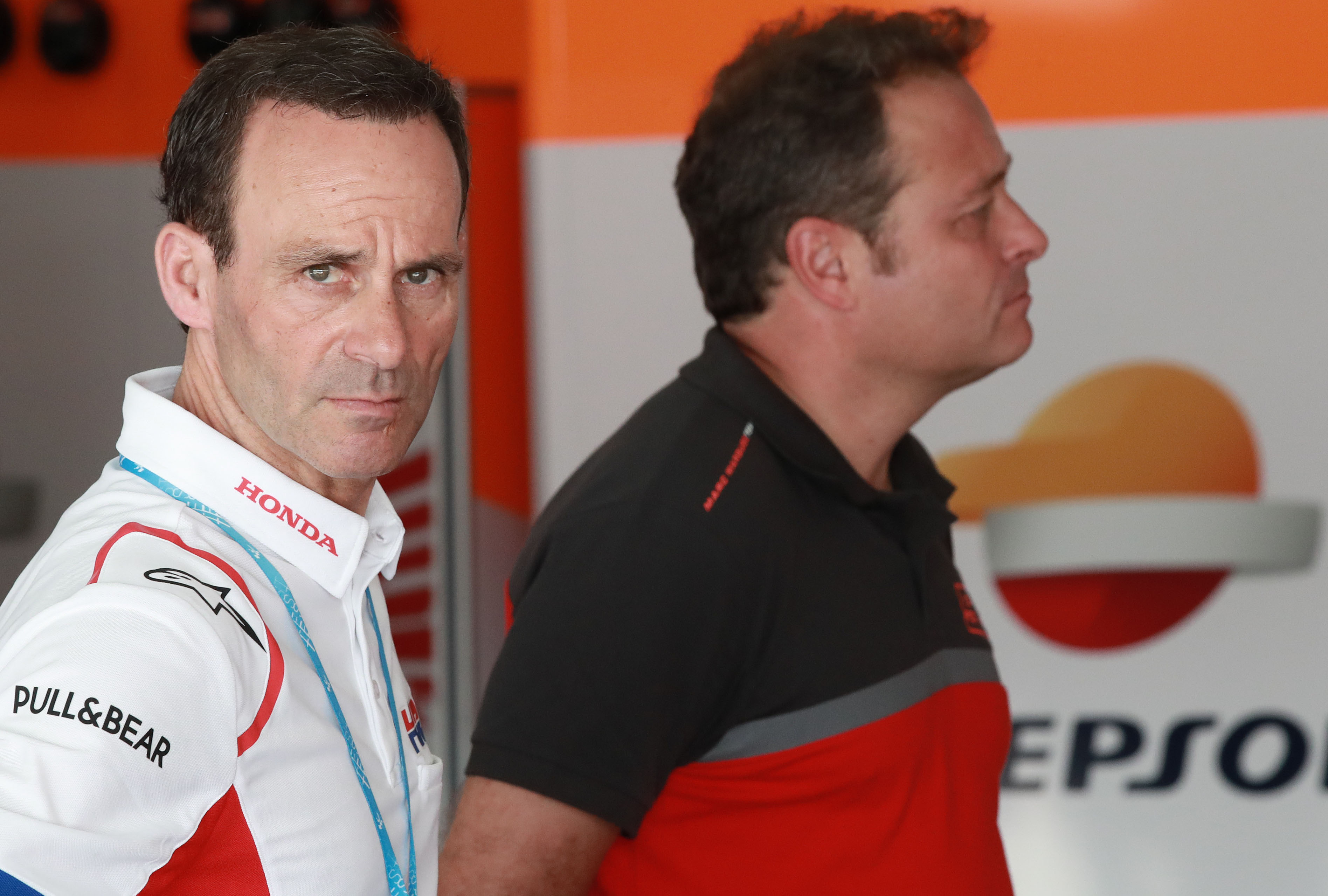 Repsol Honda team boss Alberto Puig has once again started a heated discussion about the role of rider versus bike in Marc Marquez’s six MotoGP title victories, telling pitlane reporter Simon Crafar that he believes that it’s a result of the complete package at Honda rather than the rider’s incredible talent.

This was Puig doubling down on comments made earlier this week, yet it’s at odds with the current Honda’s reputation as one of the most difficult and least rider-friendly bikes on the grid. Marquez demonstrated just how aggressive the machine is last Sunday, when the reigning champion had a huge moment followed by an even bigger crash that left him with a broken upper right arm.

“Whatever you say, you have to look at who is winning and we have built a package that is very strong,” Puig said. “Everyone is talking about the same story but what you have to see is the result of things.

“Have you ever seen a not-so-talented guy win a title? Normally talented guys have good bikes or not so good bikes but they win. It’s obvious that Marc is talented, and the package is working.”

Vinales keen to learn from rivals 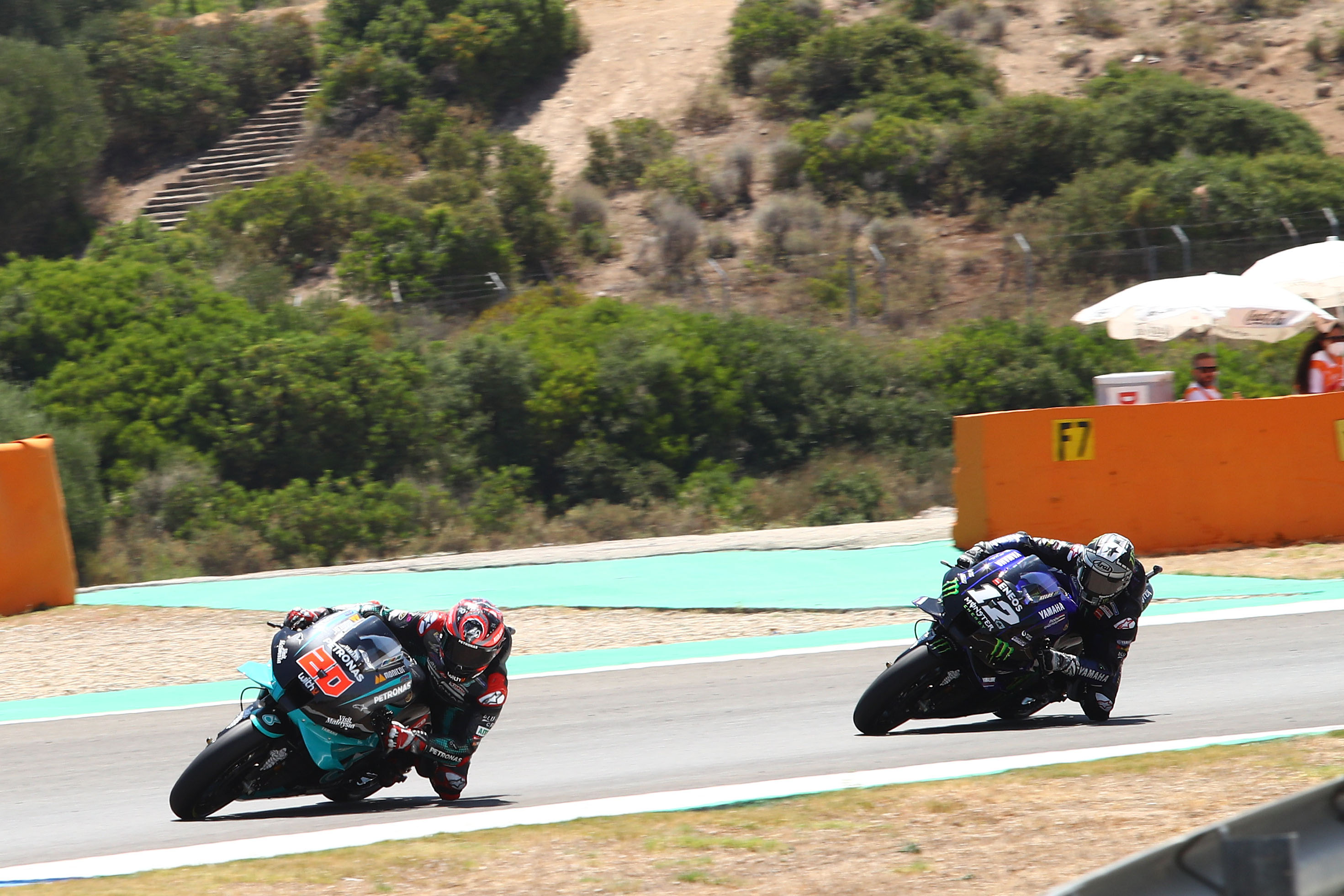 Maverick Vinales took to track in the second of the day’s two sessions for some intelligence-gathering, following fellow Yamaha rider Fabio Quartararo for part of the session.

Admitting afterwards that he didn’t learn too much from shadowing the man who beat him in last Sunday’s race, he was nonetheless adamant that it was still a useful exercise.

“I tried to understand a few things, but he’s strong where I’m strong as well,” he conceded afterwards. “It’s always useful to follow a fast rider though.” 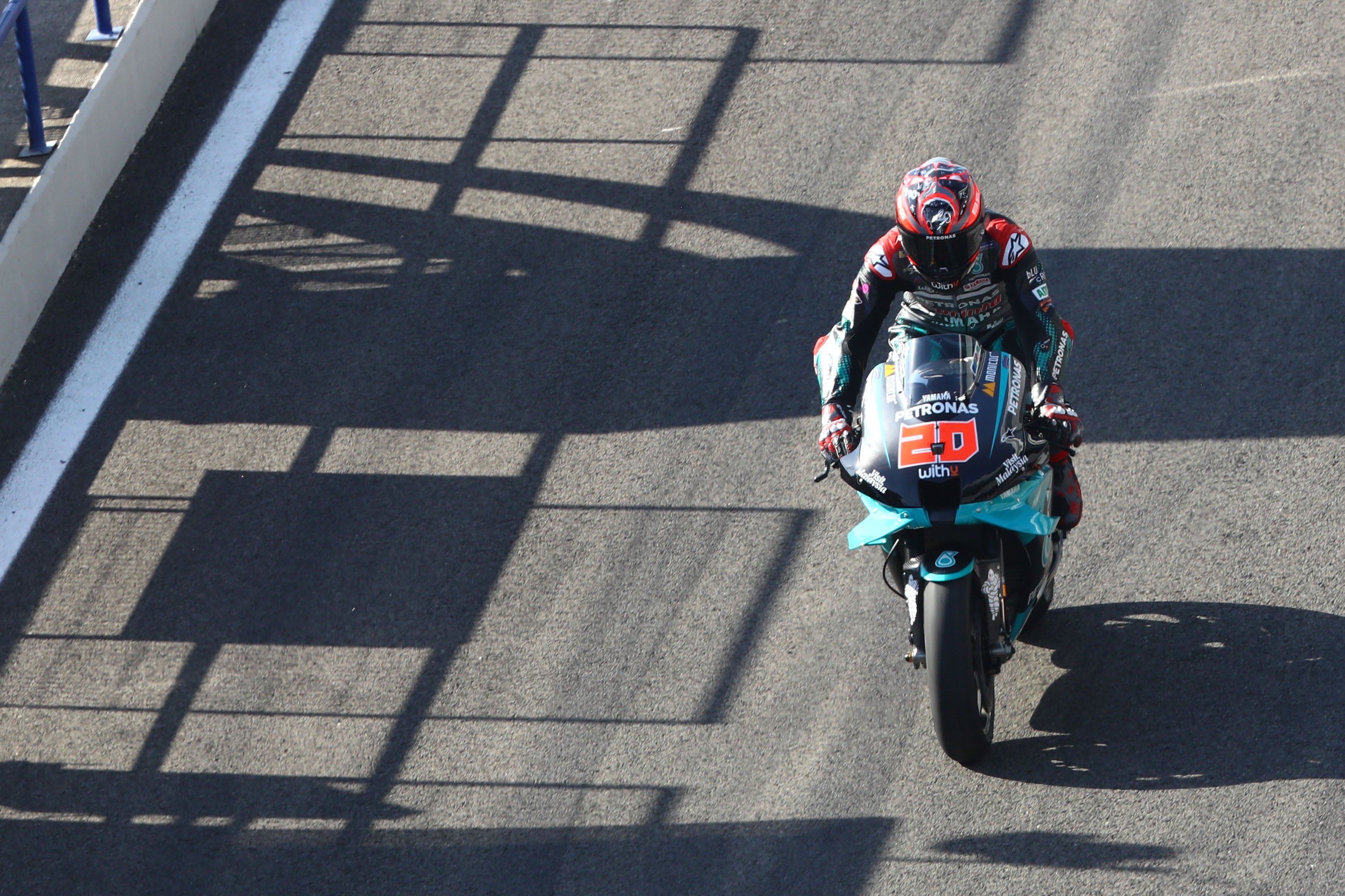 MotoGP’s newest winner Quartararo was top in Friday practice rankings more often than not towards the end of last year, but ended this Friday 14th in combined practice times.

This is unlikely to bother him or Petronas Yamaha one bit, with Quartararo using a total of four tyres – one medium front, one hard front, one soft rear and one medium rear – across two sessions and completely forgoing what MotoGP riders refer to as a “time attack”.

“Last year I was too obsessed about finishing first in the sessions. Today – and last weekend was the same, last week we were 15th [after Friday] – we said ‘okay, we work for the race, we try something to improve’, and finally it’s great.

“You need to change your way of thinking because it’s never really great to finish that far in the overall [classification] but you know that the potential is there, that we didn’t do a time attack, we always go with full fuel tank, so it’s okay.”

Last year, that was usually the approach taken by Marc Marquez and Andrea Dovizioso – work on race pace and leave the qualifying simulations until later. It makes obvious sense in that the race is where the points are paid, but in Quartararo’s case it also indicates something else – a boatload of confidence, a rider who knows he can pull out the one-lap magic at will and doesn’t need to prove his underlying speed anymore. 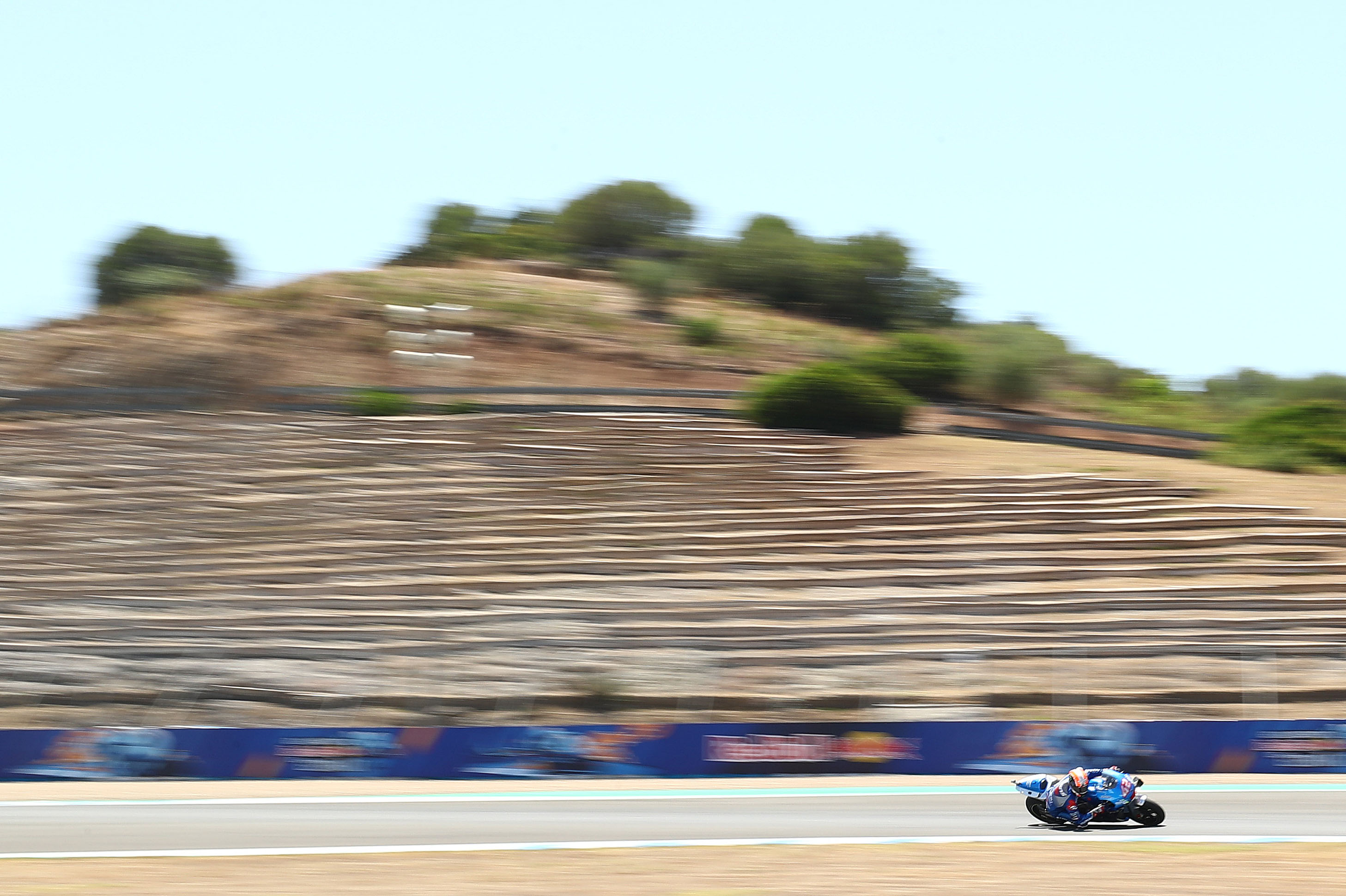 As promised in yesterday’s riders’ briefing, race control have immediately clamped down on riders disobeying yellow flags, stripping a number of laptimes from racers throughout the day.

However, race control’s response to the issue (highlighted last weekend when Alex Rins crashed and almost collected an already-downed Jack Miller) has prompted a debate all of its own today.

Following the announcement that riders who disobey all yellow flags will be stripped of their laptimes, some inside the paddock have started to question what stops a fast rider from running deep in a corner and purposely forcing the deployment of the flags after setting their own flying lap at the end of a qualifying session.

Binder looks a safe Rookie of the Year bet 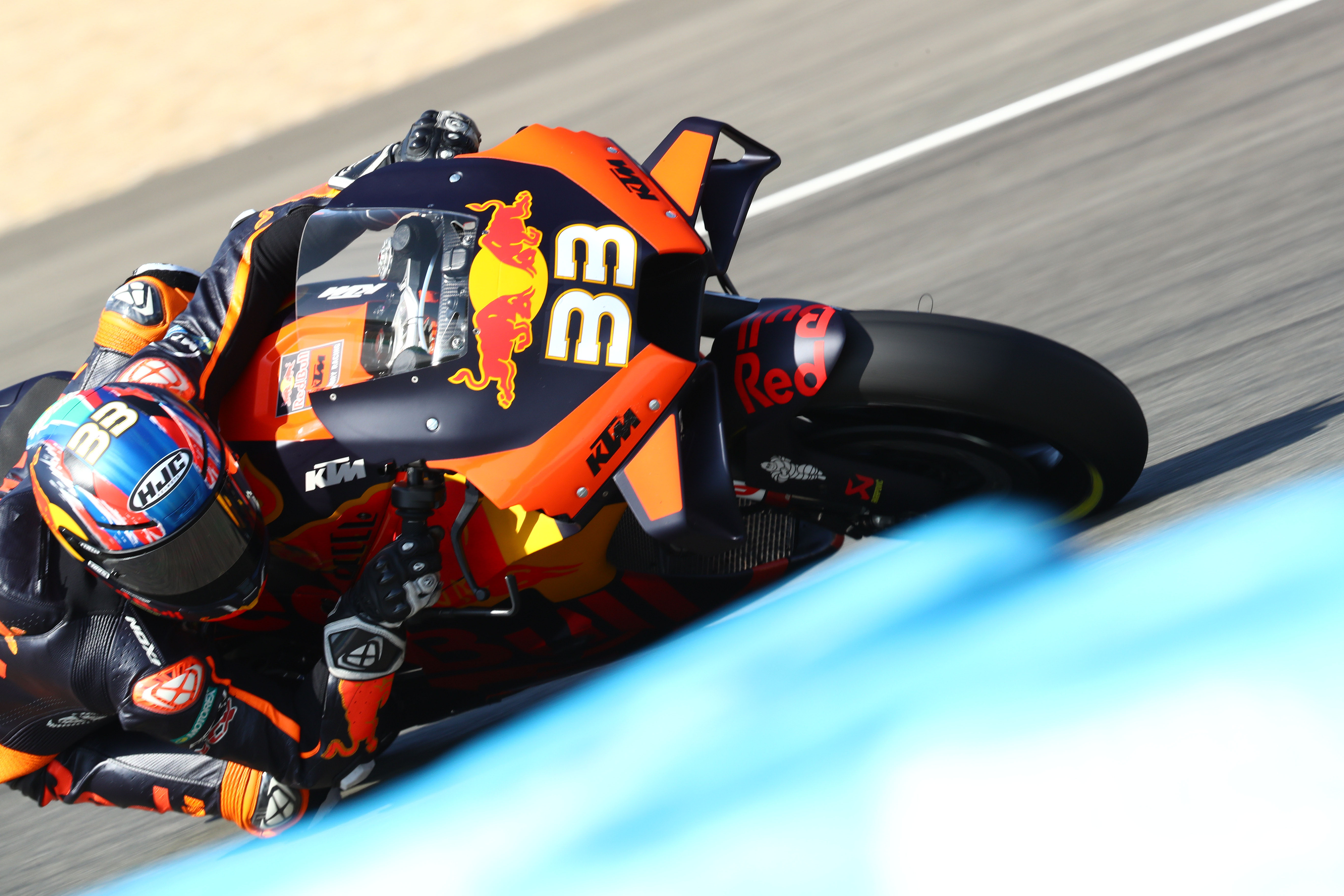 When Honda’s factory rider Alex Marquez mentioned that his ambition was to finish as rookie of the year, it sounded a modest target. It does not sound that way now – Marquez might be the highest-scoring newcomer as it stands, but Brad Binder is the clear favourite to end the season in that position.

Admittedly, this is not a revelation that suddenly arose today. Binder lost 26 seconds going off-track early on in the Jerez race, and finished just two seconds behind Marquez. The Andalucian GP’s Friday thus only highlighted the scope of the challenge Marquez and Tech3’s rookie Iker Lecuona are facing in Binder, who was third-fastest overall.

“For sure it’s a little bit of a shock to be so close to the front when we do a time attack, and it’s incredible to see,” Binder said. “I think KTM have brought an extremely competitive machine this year, and I arrived just at a good time.

“This morning was great over one lap, this afternoon – even though we had a bit of an up and down session as far as trying things goes – we still managed to put together a competitive session. Stuck out on the old tyres the whole session, never put in a new tyre or changed tyres once, so that was great – and to be 11th-fastest is not bad considering.”

Lecuona, who would’ve finished ahead of Marquez in Jerez if exhaust heat from Danilo Petrucci’s Ducati hadn’t made him dizzy and caused him to retire, likewise looks somewhat ahead of the reigning Moto2 champion this weekend. 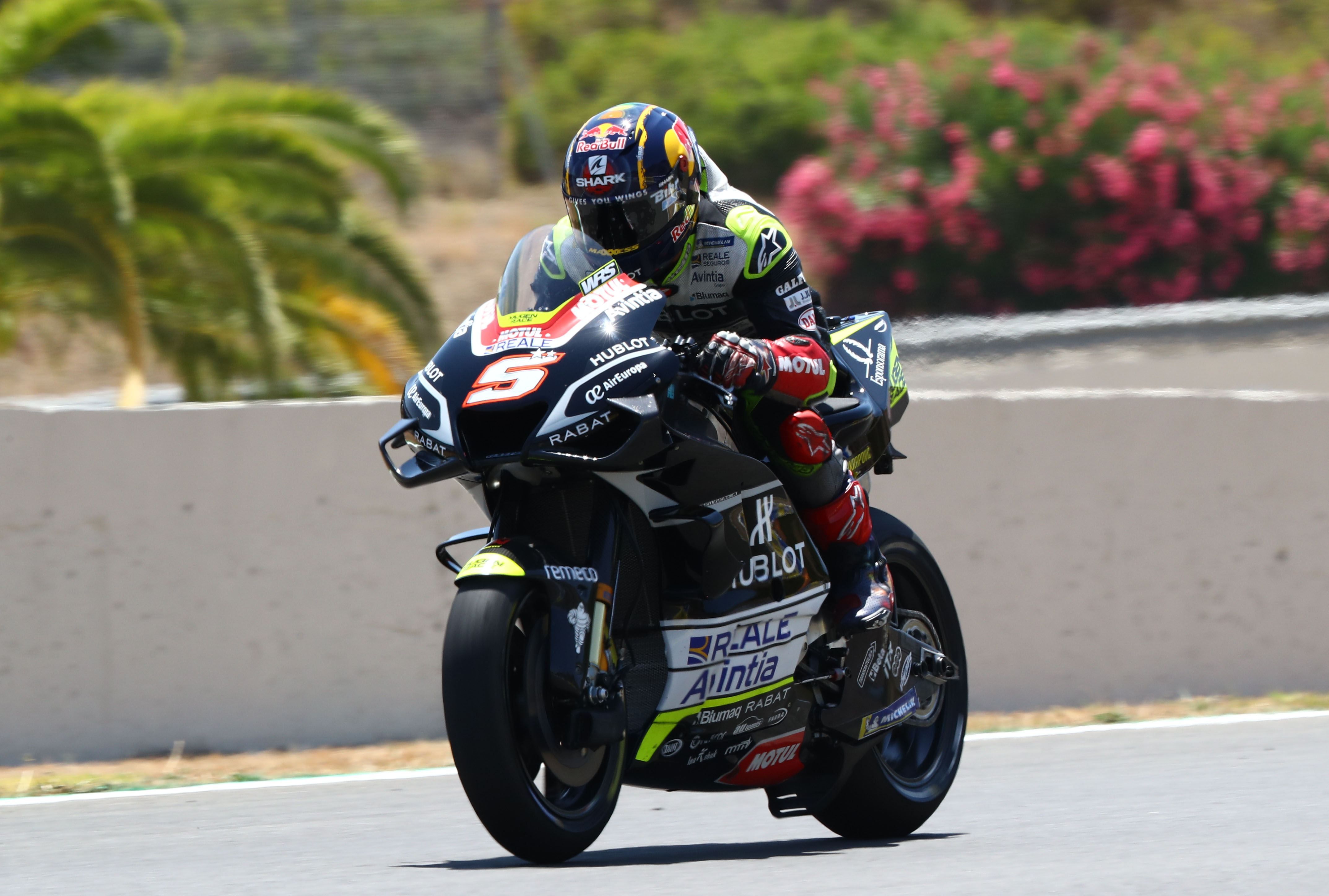 Pol Espargaro’s former KTM team-mate Johann Zarco was an indirect participant of the Spaniard’s FP2 crash, as Zarco’s Avintia Ducati being on the outside of Turn 2 when Espargaro overshot the entry forced the latter into the gravel and into a fall.

But though Espargaro’s initial anger at the incident changed into an acceptance of fault by the time he spoke to the media, he was still very much incensed with Zarco – over a completely different incident a session prior, in which Espargaro said Zarco “destroyed my lap on purpose”.

“In the morning for sure he was in the middle [of the track] while I was coming fast, and he checked behind and he didn’t really care,” Espargaro said of Zarco.

“This morning for sure he was annoying me on that fast lap, but this afternoon, no, it was just my fault.” 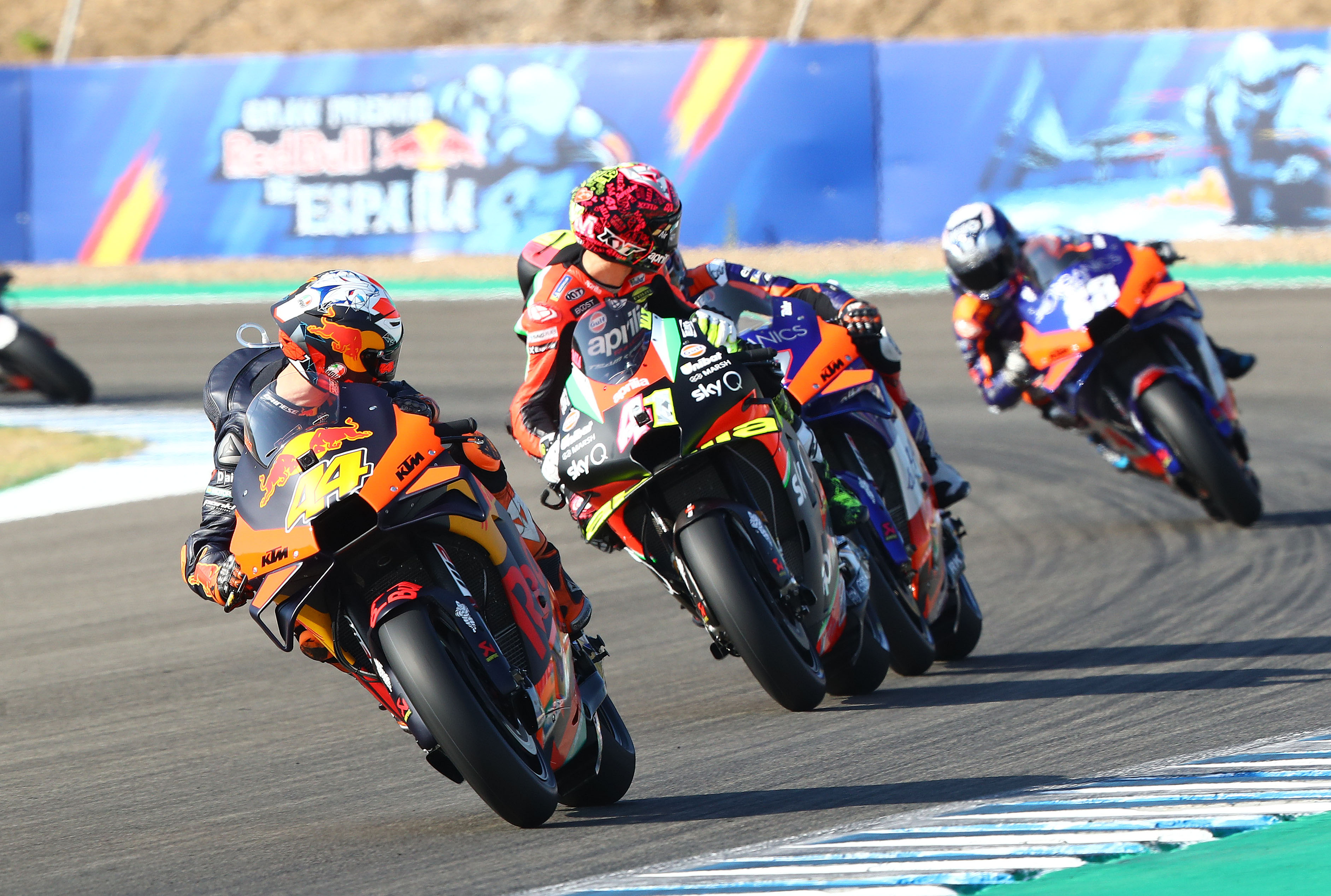