Why Castroneves is a perfect match for his surprise new team

Helio Castroneves? Not at Penske? It’s still a weird proposition even if it did happen once this year.

But the end of that two-decade relationship and the start of something new is a perfect move for the driver and the teams involved.

The move has been made possible in the latest element of the MSR team’s growth: securing investment from Formula 1 owner Liberty Media through team co-owner Jim Meyer. 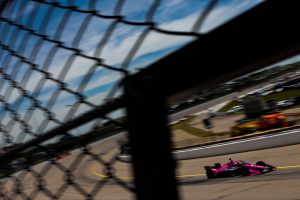 It’s part of an incredibly quick nuts and bolts building of a team from scratch to one that can legitimately finish in the top 10 at any IndyCar racetrack while also having secured factory backing from Acura for a return to IMSA prototype racing in 2021.

On the IndyCar side, the team has gradually increased its appearances starting with its Indianapolis 500 entry in 2017, and a switch of technical partnership allegiance from Schmidt Peterson to Andretti Autosport for 2020 signalled its first full season of action.

With Jack Harvey as its driver throughout, the team has impressed and Harvey took 13th in the championship this year, which could so easily have been a top 10 had a number of bizarre incidents gone for instead of against him. His average start in 2020, for example, was 8.8. Castroneves says he can “guarantee you in 2021 Harvey is going to become an IndyCar winner”.

Harvey and Meyer Shank have formed an intrinsic relationship having gone through so much together over the course of the last three years. However, despite Harvey’s innate talent, one thing he can’t bring is over 300 IndyCar starts and three Indy 500 wins. Castroneves can.

That was the conundrum for Michael Shank when the opportunity to expand the team came about: go with another young driver – a journey that has been so rewarding with Harvey – or go for more experience for a different benefit to the team. 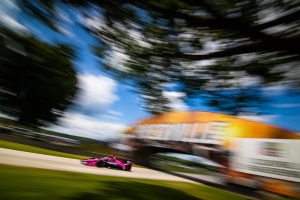 How results are masking a surprise IndyCar standout
Read more

On the whole, it’s an inspired move. The level of experience Castroneves brings will be vital for the next step of Meyer Shank’s expansion.

“People do call us a smaller team and I understand that, but especially with this announcement that moniker will probably have to be shed at some point,” Mike Shank told The Race recently in response to the confirmation of Liberty Media’s backing.

Shank isn’t interested in having a huge stable of cars, he’s just interested in a handful of cars doing the best championships at the highest level. That’s his MO.

Even in a worst-case scenario where Castroneves isn’t able to consistently bag strong results, he’ll still bring more off the track than he does on it in helping this outfit. Best-case scenario, he’ll be fighting at the same level as Harvey and will be in a position to challenge for a fourth Indy 500 – something Shank is desperate to win for a first time too.

On that subject, Shank said “there will be no budget” for Castroneves’ at the Brickyard. “It needs what it needs to be the fastest machine we can make for him,” he added. “Specifically for that race we’re going to do lots of work to make sure that car is as good as anything out there.”

From the start of the 2000 CART season to the 2020 Indy 500, Castroneves only raced IndyCars for Penske – doing so full-time up to 2017 before stepping back to part-time and Indy 500-only deals as he focused on sportscars.

A one-off stand-in outing on the Indy road course this season for Arrow McLaren SP yielded only 20th- and 21st-place finishes. However, he was thrust into that seat at late notice without testing and has not driven a road course in IndyCar for three years. The aeroscreen device has altered handling dramatically so there was so much to learn with just one practice before qualifying and two races.

Speaking to The Race after that outing, Castroneves was buoyant. Despite struggling to adapt to the Arrow McLaren SP braking system and steering wheel, he knew he had a lot to bring to the team and enjoyed working with team-mate Pato O’Ward. 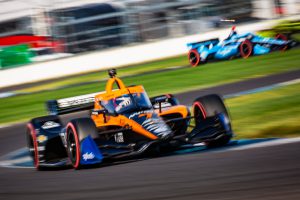 Will Castroneves be more than a sub for Arrow McLaren SP?
Read more

He said: “I need to understand and be part of the process, so that we can grow together and I would love to continue, to pursue coming back to IndyCar.”

Now he’ll bring that experience for Harvey – still learning in an IndyCar setting, especially on ovals – as the team continues its quest to become one of the strongest teams in North America, something Mike Shank thinks the team has already achieved with the addition of Liberty.

And they are even aiming high as soon as next year. “The sky’s the limit,” said Castroneves. “We have a great opportunity here. I don’t see anything to stop us from having great results and winning races.”

It could be more than just IndyCar race wins Castroneves and Shank are eyeing though. Shank got his break in sportscar racing – Castroneves raced for him at Daytona in 2007 – and that is where this deal also makes a huge amount of sense for the team.

Castroneves has spent three years racing the Acura ARX-05 for Penske in the IMSA SportsCar Championship. The car was exclusively run by Penske but that ends in 2021 when Meyer Shank and Wayne Taylor Racing take over the mantle, with Penske yet to reveal its long term sportscar plans after the Acura split.

It’s a big opportunity for Shank to get factory backing, and it’s just signed the driver likely to take the IMSA title this year in Castroneves. The final round is at Sebring this weekend.

While Castroneves’ exact sportscar schedule with the team remains unclear, it’s a no-brainer that he should at least race in America’s blue-riband sportscar events for the squad next year and likely, the rest of the season in a potential title defence.

Asked about this, Shank said it was “not really what this announcement is about, but there’s other things going on there for sure”.

Shank is eyeing a Le Mans future for his team, and with IMSA and the World Endurance Championship set to share regulations from 2022 it’s possible. Castroneves’ experience would be vital in understanding the current car and expediting the adaptation to working with Acura.

In fact, Castroneves may not be the only IndyCar convert the team looks at. A number of top single-seater drivers, like Andretti’s Alexander Rossi, have sporadically raced an Acura for Penske. The likes of Colton Herta and Scott Dixon also race in the IMSA series around their IndyCar schedules.

The Castroneves/MSR deal is one of those where when you see it initially, you think “is that the best deal for Castroneves, or Meyer Shank?” But when you scratch away at the details, it can only be a win for both driver and team.

It’s still going to be weird thinking about the long-term Penske man in an Andretti engineers’ briefing, though…

What does this mean for silly season?

At Andretti Autosport, Ryan Hunter-Reay and Marco Andretti are set to continue, while James Hinchcliffe will likely get a full-season seat with the team in the #26 he finished the season in. All are yet to be announced.

Charlie Kimball and Dalton Kellett are likely to secure seats at AJ Foyt, remaining with the team.

Alex Palou’s departure means Dale Coyne will want to keep Santino Ferrucci on, while his team-mate is undecided and totally unclear given the lateness of Palou’s Chip Ganassi Racing move.

Jimmie Johnson is contesting the road course rounds next year with Ganassi, and Tony Kanaan is likely to take the three oval races to make that a complete, full-season entry.

Ed Carpenter will contest the oval rounds with his own team but is believed to be working on a full-time seat for Conor Daly, who did the ovals with Carlin and the ovals with ECR this year.

Carlin is known to want to keep Daly, so if a full-time ride at ECR falls through then the ride-share could continue for Daly with Carpenter and Max Chilton at Carlin.

Carlin’s second car is likely to be part-time if at all, with ex-F1 driver Felipe Nasr still hopeful of an IndyCar switch after his impressive test outings pre-season.