“Do you want to come and take a ride around the track?”

I don’t think I’ve ever answered ‘yes’ quicker to a question.

I knew at the start of this year that my second priority after the Indianapolis 500 was getting to Road America. It’s a track I’ve driven on simulators and games, watched countless races at on TV, and just generally loved – it’s a classic road course.

Having been trackside, I can now easily say it’s the best track I’ve been to.

RACER magazine’s Marshall Pruett is the man posing the question of getting out and about, and after a short trip to collect Chip Ganassi Racing PR rep Tom Solliday – and some contorting to squeeze into the boot of what is a two-seater golf cart used to navigate the huge facility – we head for Canada… 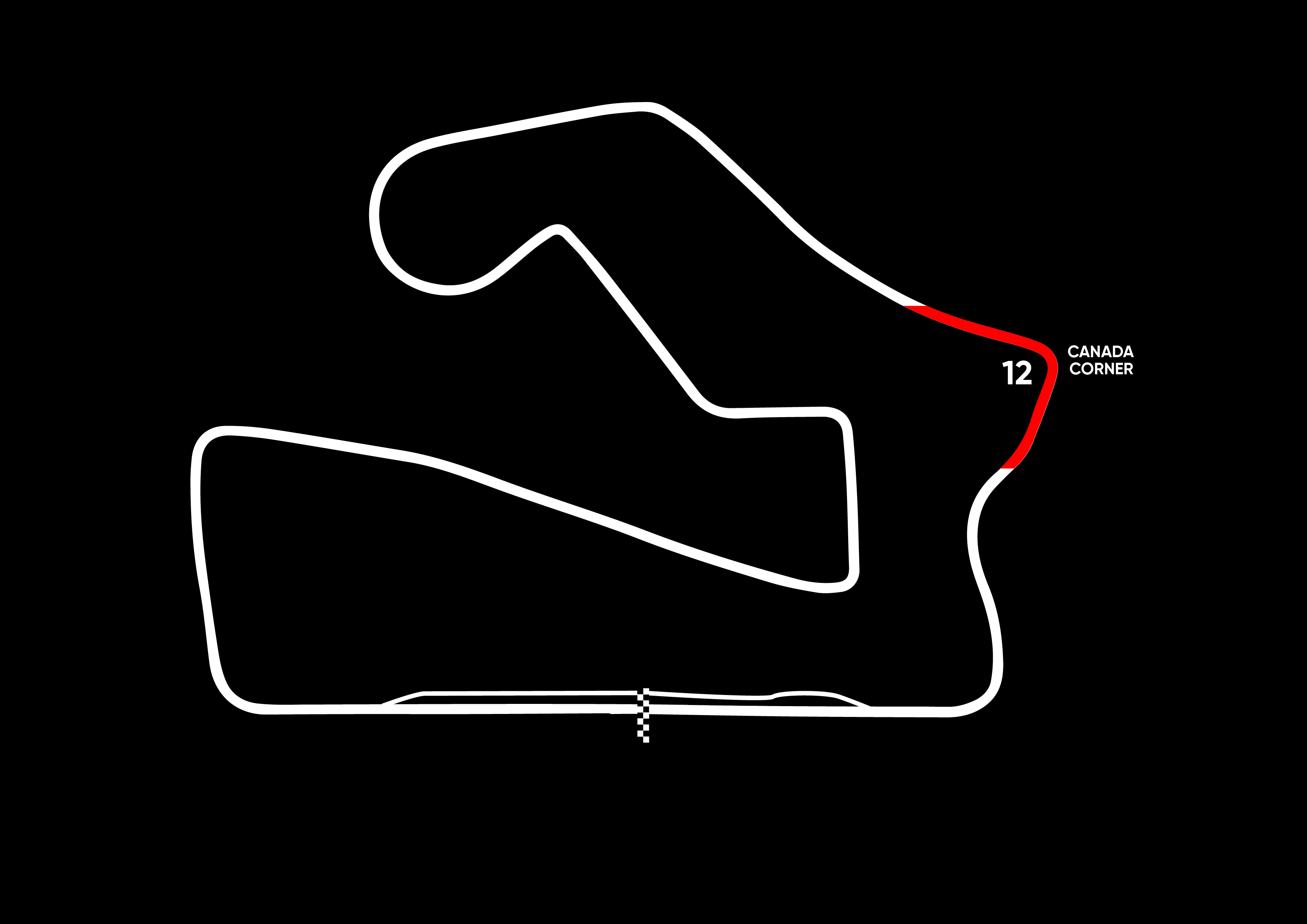 The access is incredible. We started above the corner in the trees where a familiar shot of the car through the shrubbery is taken. Pruett’s off taking pictures so we descend trackside.

It’s here we get the most brilliant look at IndyCars in a relatively low-speed and tight, cambered corner at the end of a long straight. 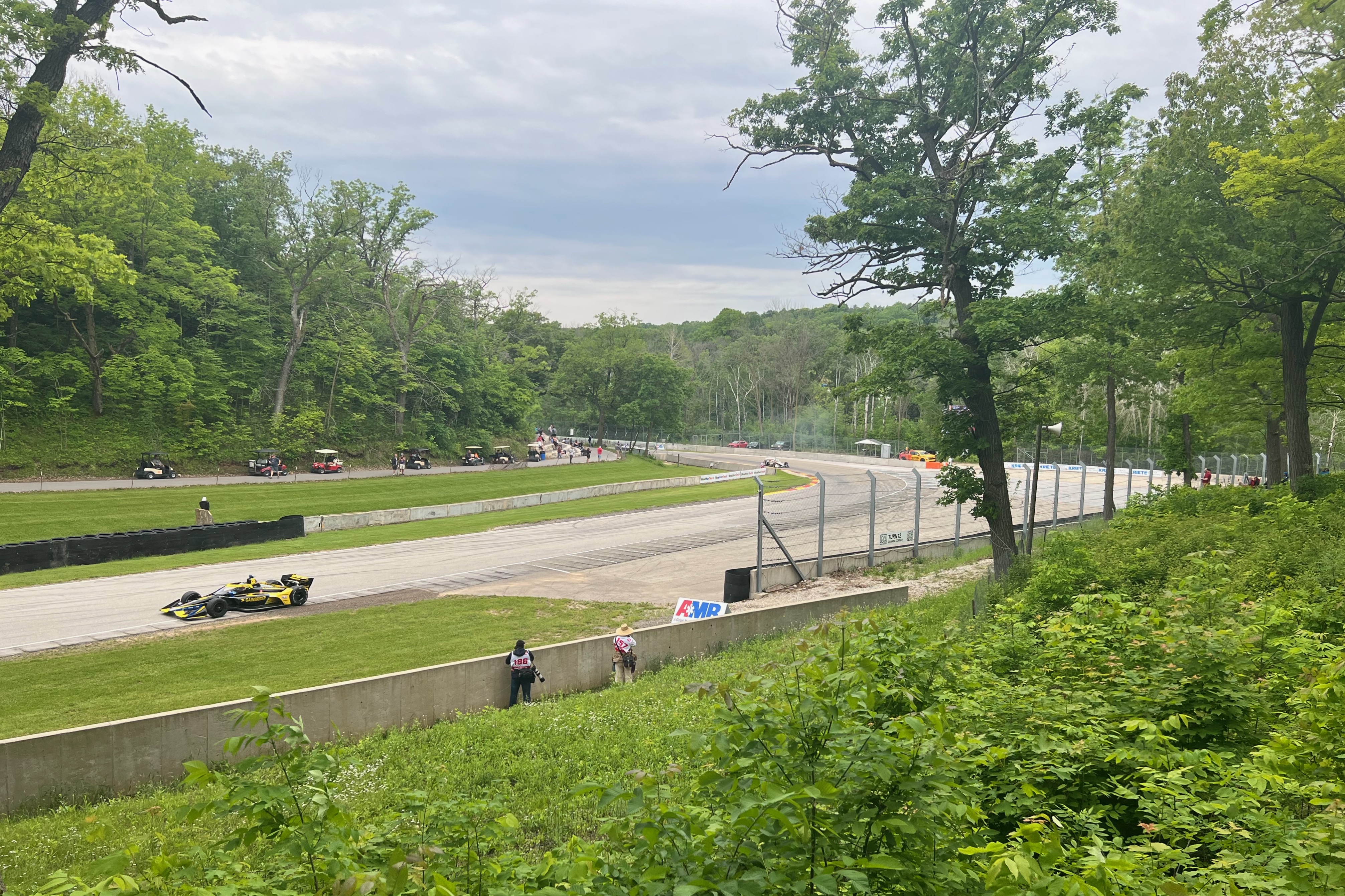 Since the introduction of the aeroscreen in 2020, a certain amount of mid-corner understeer has underpinned every car, with the larger teams with more resources able to dial some of that out. But it’s always there at inopportune moments.

It’s to the extent that for some cars, at the apex of the corner, it looks like the driver has fallen asleep and literally turned away from the corner, in the opposite direction to travel. Or a little wiggle throws them wide and kills the exit.

The rapid, reactionary reflexes of the drivers are really impressive to watch, and kudos to the ones wearing light/coloured gloves so you can see them at work in the cockpit. 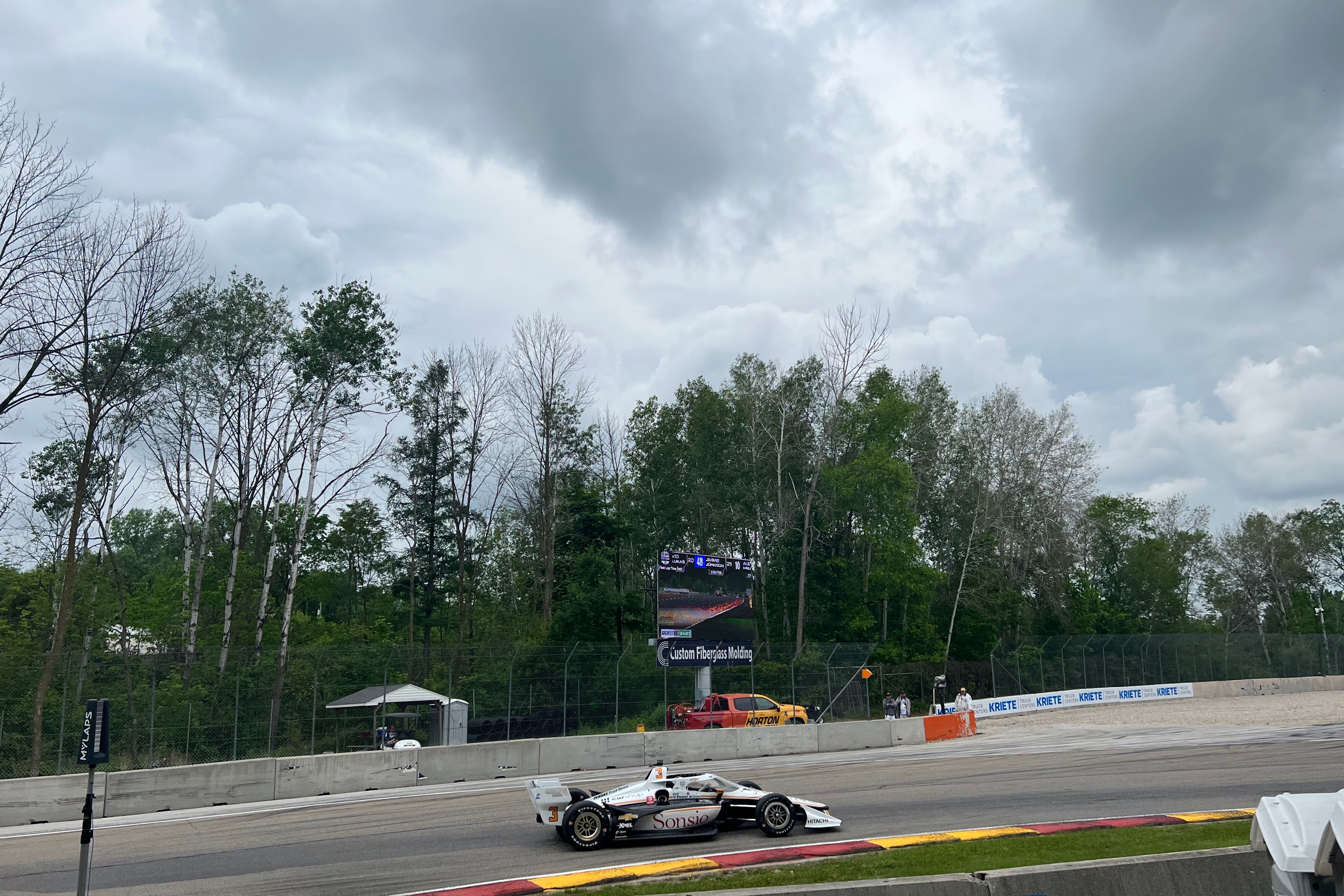 There’s a range of styles here, with some drivers braking earlier to keep a tight line and straighten the wheel as quickly as possible, while some ‘charge’ the corner carrying vast amounts of speed at the entry, tidying the resulting understeer/oversteer mid-to-exit, and then getting back on the power.

The star at this corner in practice is Pato O’Ward, who comes through braking at a different point and trying a different line every lap. Seeing onboards of the Arrow McLaren SP car over the weekend pointed to it being as tail-happy as ever, but O’Ward is almost certainly experimenting with lines and entry speed here to get ready for qualifying and the race.

Pato O'Ward's engine dies, bringing out the caution inside 10 laps to go! #INDYCAR

The clock hits 10am and it’s back in the Happy Gilmore mobile – in Porsche 911-spec with me in the boot and pushing the rear wheels into the ground (which makes the hills hard work) – to head to the Holy Grail. 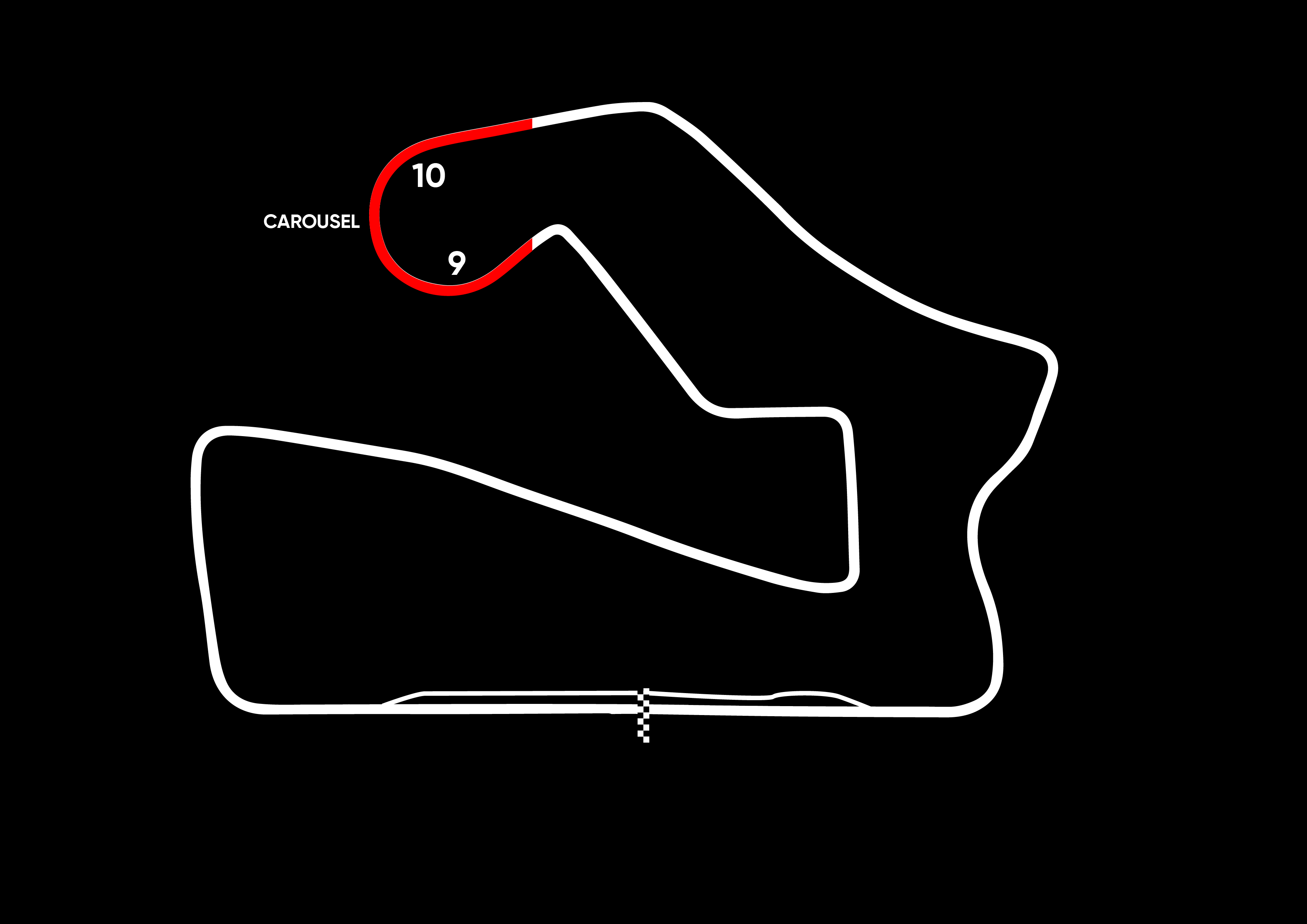 The entry comes from a 90-degree left hander so the set-up is relatively unspectacular, but the Carousel itself is absolutely unbelievable.

In some previous aerodynamic specifications this corner would have been flat at least in qualifying – which is spectacular enough given how tight the corner is – but now with less downforce and with the car moving around it’s even better. 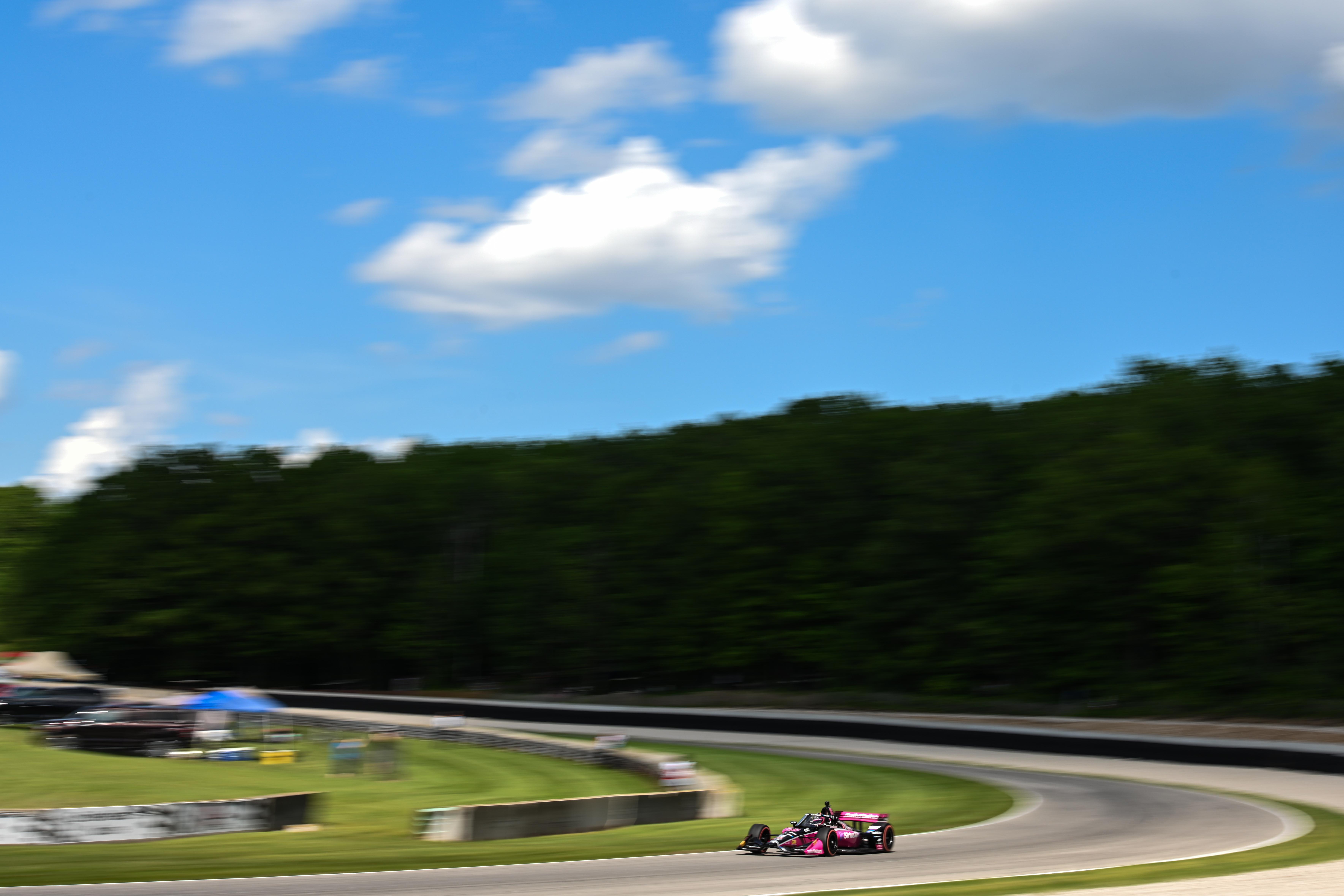 In the race there’s a big lift, but here in first practice the drivers are doing qualifying sims with the soft tyres so there’s a few drivers, notably Will Power, Alexander Rossi and Josef Newgarden, who are close to flat all the way through the corner.

It’s one of the first corners I’ve been to where you can learn as much if not more just by listening. You can hear the drivers feathering the throttle on some laps – that’s certainly what happens in the race when tyres start to fall away.

We head back to the paddock and there’s a gracious offer from Pruett to head back out for practice later in the day, after qualifying.

Assume there were some cheese curds (a deep-fried cheese delicacy) and double brat (two bratwurst sausages in a bun) consumed before our return. 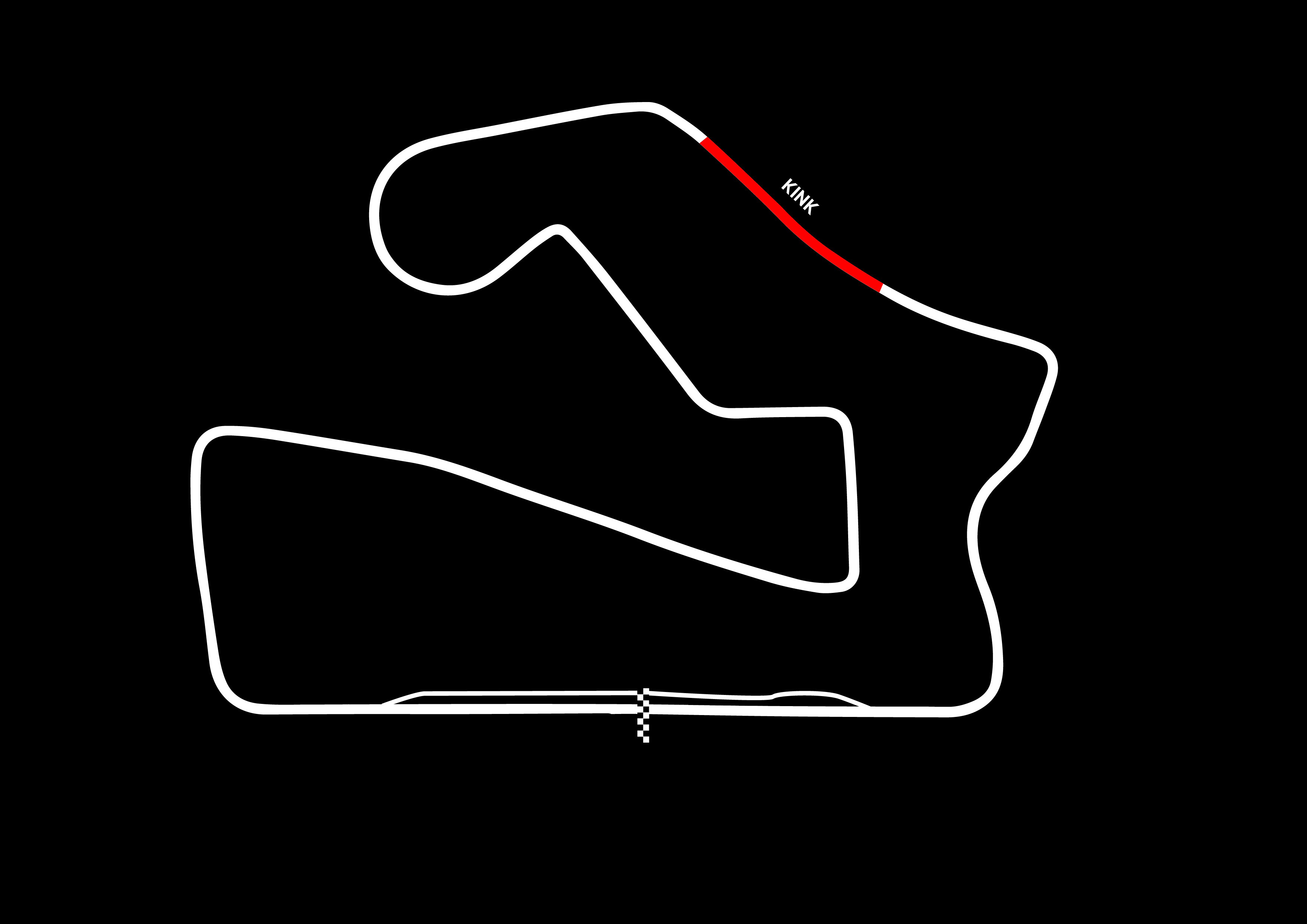 With qualifying reports sorted, we head back out (minus Solliday at this point, who has returned to work duties) to Canada Corner briefly – this time on the inside – before taking the trip to The Kink, which is just before Canada Corner.

A sidenote, the winding roads around the outside of the track look more like a rally stage than anything else, and Indianapolis Motor Speedway president Doug Boles is a surprise spot driving members of his family around on a trip away from the Brickyard for fun. That’s the level of enthusiast IndyCar attracts. 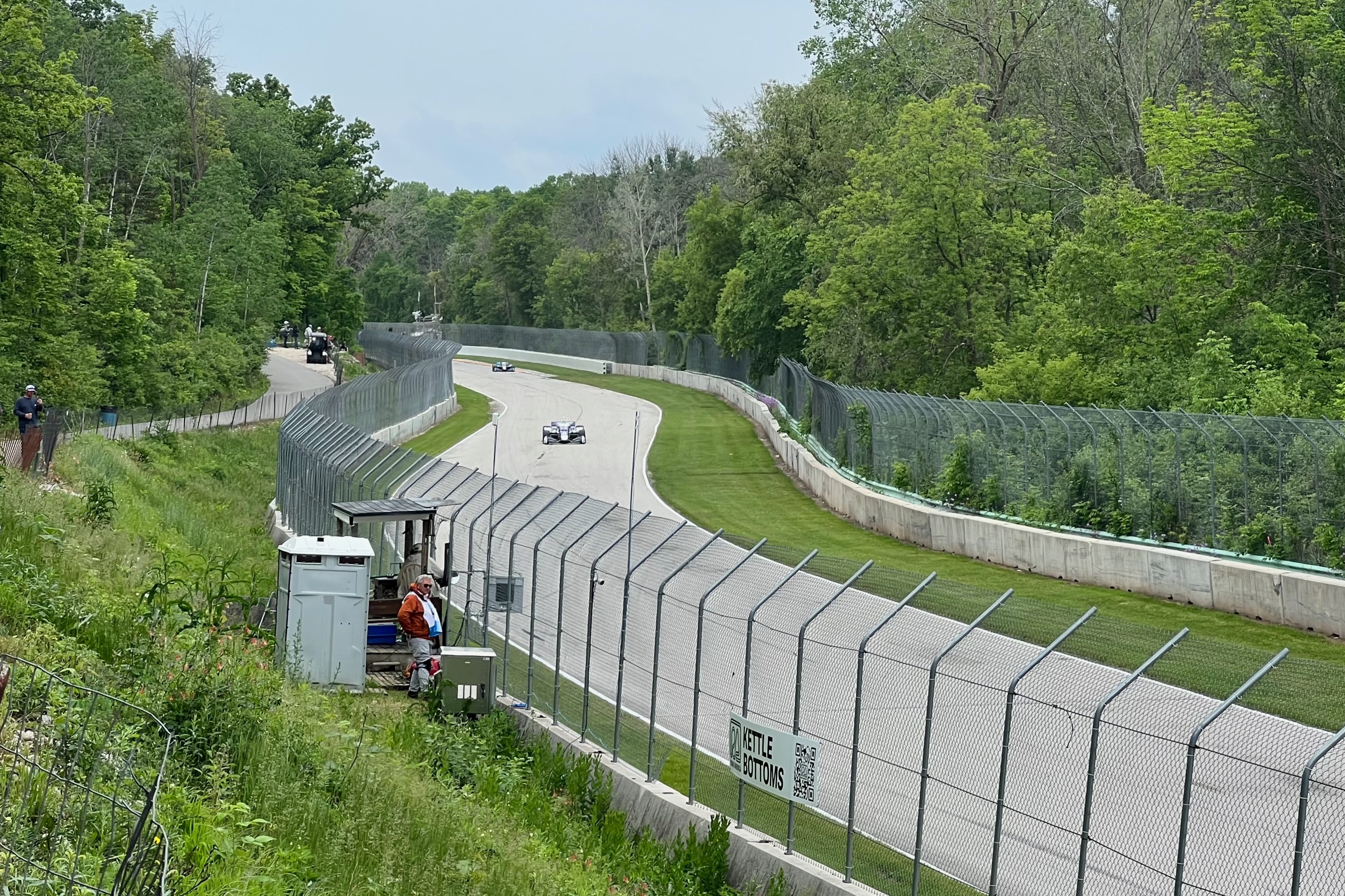 The Kink is mind-boggling. Put it in the same category as Paddock Hill bend at Brands Hatch or the Corkscrew at Laguna Seca, the TV coverage and pictures don’t do it justice or show just how difficult it is.

It might be called The Kink, but this is a corner. There’s not a lot in terms of variance in driver approach here, it’s more ‘hang on and enjoy the ride’, but Simon Pagenaud showed how wrong you can go there in the race by running onto the grass.

There’s plenty to be gleaned from the kerb just before the turn to the left.

Here, you can really see who’s running softer or firmer damper packages and how each car is riding the bumps. Andretti and Ganassi especially look really flat and planted here, showing the benefits of their respective damper programmes.

With that, a red flag calls early time on the session and we had back to the media centre to avoid any rain.

A huge thank you to Pruett for his chauffeuring skills and generally making The Race extremely welcome in the paddock. Media of all sorts may be in competition for eyes and clicks but on Saturday, he and I were just two enthusiasts taking pictures and enjoying what you can learn trackside at an IndyCar race. 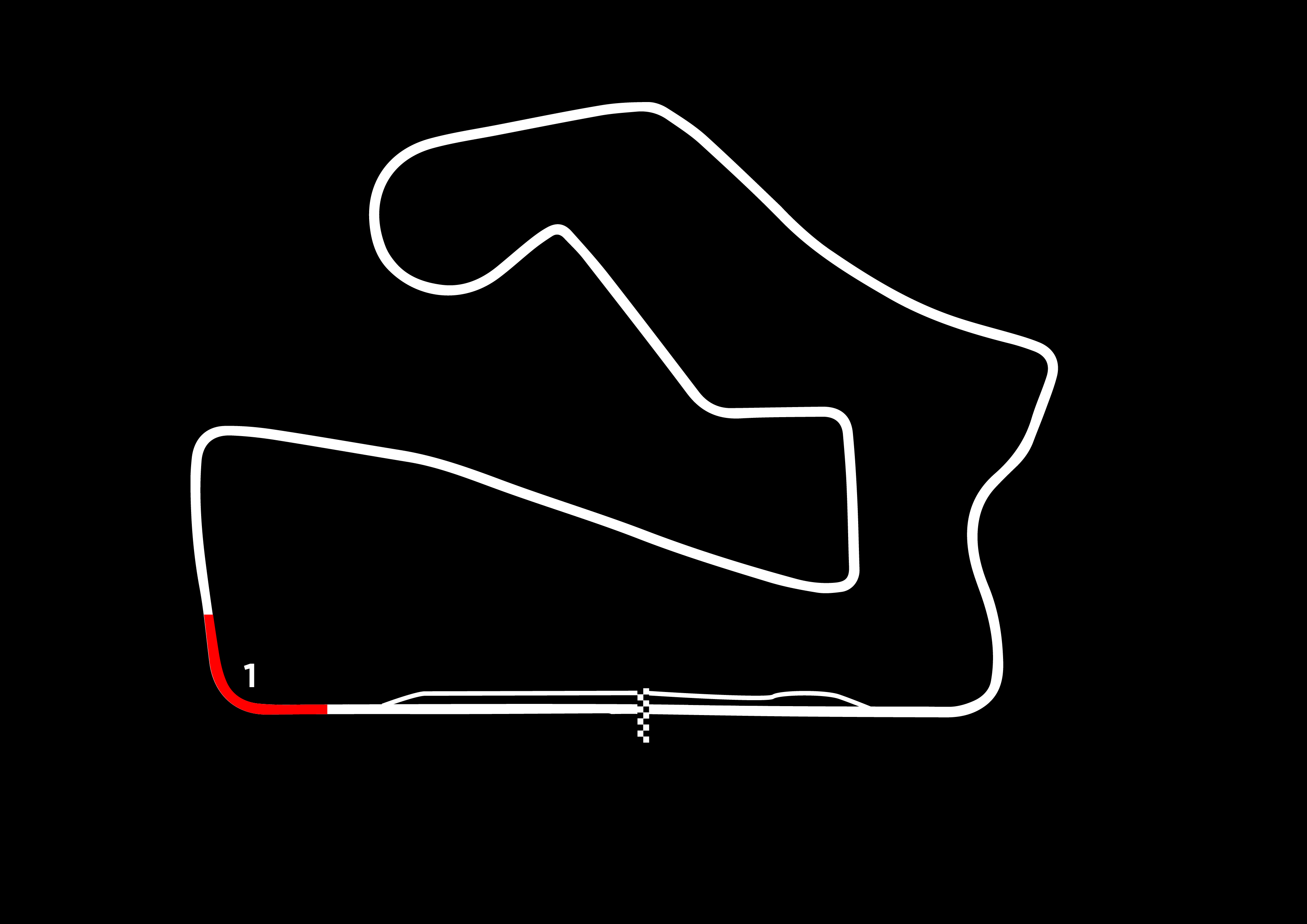 In addition to those excursions, I manage to get out and have a look at Turn 1 and 5 alone – bouth of which are very interesting.

Turn 1 certainly isn’t the best corner on the track in terms of analysing driving style or the mechanics of IndyCar cornering, but it’s included for the spectacular sight of the cars coming towards you and perhaps more importantly how it can catch people out.

It’s an almost 90-degree right-hander following a long straight, with extensive run-off on the outside.

RETWEET if you're watching the NTT @INDYCAR SERIES!

We're underway at @RoadAmerica as the first caution of the day comes out for Jimmie Johnson.

However, the run-off turns to grass 100 metres or so from the apex of the corner, so it tempts you to be greedy and use all of the road – but if you bite off more than you can chew you’re on the grass.

This also impacts overtaking because although the track is relatively wide, it soon narrows and you can easily be hung out to dry on the grass, especially with an unforgiving driver on the inside.

What you can do here is get a great idea of consistency. For example, it reaffirms just how neat and tidy Alex Palou because, having watched him through the corner in practice, it was impossible with the naked eye to see any variation lap to lap.

It’s a real statement first corner for a lap that is over four miles, it’s already sucking you in and trying to catch you out from the start. 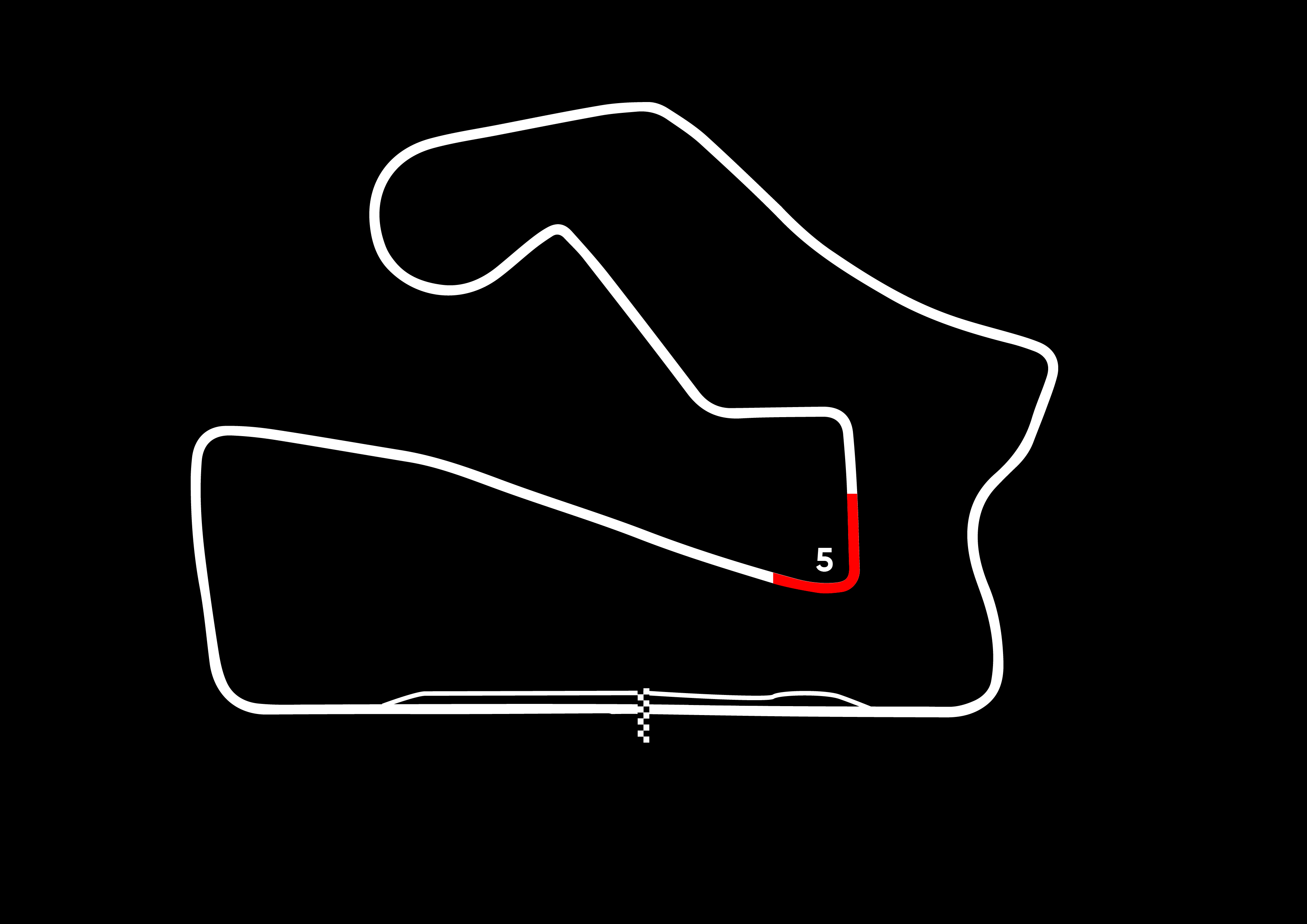 The best overtaking corner on the track, Turn 5 forces drivers into desperation.

It’s another near 90-degree corner, this one to the left. It also has run off that narrows and becomes grass, which is why almost all of the successful overtaking moves here are down the inside.

The little-discussed element to this corner is that the downhill braking zone is steep and it’s easy to see why drivers lock up and also punt other drivers off track.

.@alexpalou is off-track and the yellow flag is out again for this incident between teammates.

The defending @roadcamerica race winner is done for the day.

It’s also quite narrow for an overtaking spot. It’s easily wide enough for two and a half cars. But in situations where you’re defending and you place your car in the middle, it can leave the car behind with nowhere to go.

It’s a fantastic overtaking corner for another reason: that you can’t just park your car on the inside line in defence. Because of the radius of the corner, that would almost certainly allow the car behind to pull off a switchback move to take the inside for Turn 6 instead. 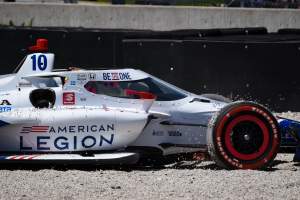 Marcus Ericsson and Alex Palou showed that this corner can be treacherous if both attacker and defender aren’t totally alert to each other and don’t respond quickly enough.

There’s plenty going on with the tactics at this bend and it always delivers drama on race day.

So, there’s a whistle stop tour of Road America. Ticket sales are reportedly up, and some drivers acknowledged the size of the crowd and how it was bigger than before.

Those spectating were greeted and treated to some brilliant Road to Indy racing as well as the blue-riband event, and generally people from Wisconsin seem really nice and accommodating.

All that aside, the people in attendance should be proud. They have one of the most complex and enjoyable road courses in North America.