In a bizarre race that included a momentary shower and a handful of crashes, it was a story of survival for title rivals Newgarden and Dixon.

Newgarden needed to finish at least second to have any hope of the title, and started eighth while Dixon – with a 32 point lead – was 11th.

Both drivers were able to move up at the start with Newgarden – starting on the softer compound red tyres – avoiding a crash with Sebastien Bourdais and then later with his pole sitting team-mate Will Power as he raced aggressively.

After two yellow flags just before halfway Dixon made two key moves, passing Graham Rahal and initially backing out of a move on Jack Harvey before completing it later in the lap to take sixth, with Newgarden fourth.

Other drivers’ misfortune promoted both contenders further, and following a very light shower under caution, on the lap 79 restart Newgarden passed Colton Herta and Alex Palou at the exit of Turn 2 to take the lead.

A crash immediately after that move brought out the safety car – which then ran out of fuel!

On the restart, Arrow McLaren SP driver Pato O’Ward made three passes and harried Newgarden for the lead for the remainder of the race, but Newgarden held on, extending the gap in the last 10 laps to over four seconds.

At that last restart Dixon was relegated to fourth by O’Ward, but Herta then went off at Turn 4 for the second time in the race to give Dixon the position back.

"I never doubted it. Not with you guys. What a team."

It was enough to secure the title for Dixon in a year where he won the first three races, but Newgarden executed a massive points swing over the last five races and will be left contemplating bad luck in the first half of the season which cost him a third title.

An incredible battle for $1 million took place during the race, with the money on offer for securing the 22nd spot in the owners points standings.

Bourdais had run around the top 10 for the early part of the race but was forced to make an extra pitstop – under caution – just before halfway.

That intersected with Marco Andretti – starting 23rd – making up a handful of positions on the lap 53 restart, the most impressive of which a pass for seventh in which he locked the front left and dived down the inside of Graham Rahal to take the spot.

However, Andretti was taken out of the race on lap 75, and Bourdais came back to the fore for AJ Foyt Racing to secure fourth behind Dixon and claim the $1m for his team.

Ryan Hunter-Reay took fifth as the highest finishing Andretti car, when three of his team-mates previously ran 1-2-3. Herta was the next best in 11th.

Andretti’s James Hinchcliffe ran second with just over 20 laps to go but spun under yellow and then drove into Jack Harvey while rejoining the track – breaking his front wing. He dropped back to 14th.

His team-mate Alexander Rossi led most of the first half of the race but crashed three laps after pitting, with 26 to go, taking him out of contention. He crashed in the same place Will Power had – Turn 3 – earlier in the race.

Alexander Rossi's season will end winless after this crash in the #GPSTPete on @NBC. #INDYCAR pic.twitter.com/BaXj1L657y

Polesitter Power gave the lead to Rossi after five laps following a downshift issue and continued to fall back before his lap 36 crash.

Charlie Kimball made it two AJ Foyt cars in the top 10 with eighth, ahead of Rahal Letterman Lanigan team-mates Rahal and Takuma Sato.

Treble Australian Supercars champion Scott McLaughlin said his IndyCar race debut was “the best day of my life, apart from my wedding”, but crashed out in the first half of the race after a half hearted attempt to pass Andretti failed and also collected Rinus VeeKay.

VeeKay merely had to start the race to win the rookie of the year title and confirmed his return to Ed Carpenter Racing on the morning of the race. He recovered to 15th after the incident.

With Dixon’s third place and Hunter-Reay’s fifth, Honda secured its third IndyCar manufacturers’ title in a row ahead of Chevrolet. Each manufacturer’s top two finishing cars score points in each race, providing they contest the whole season. 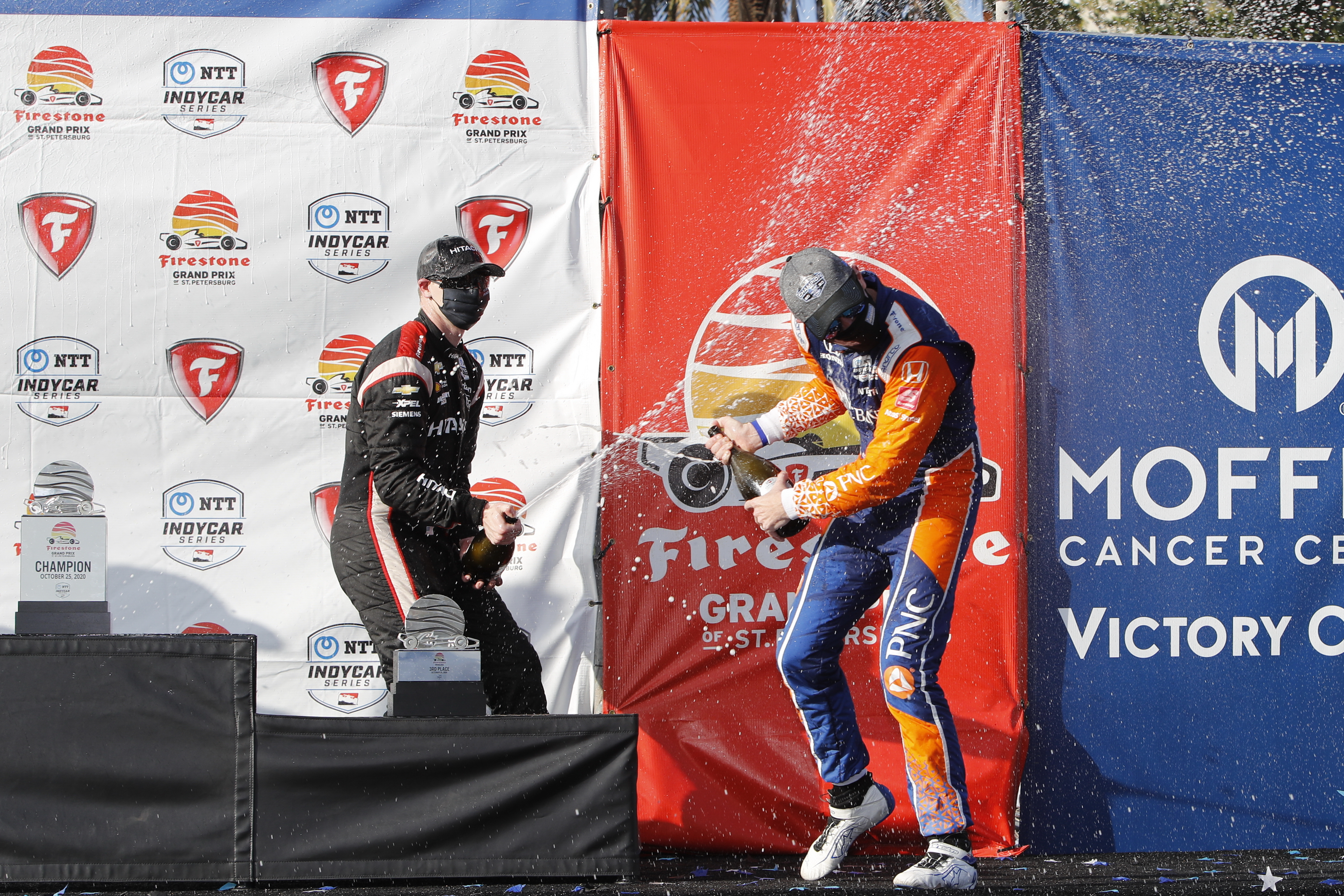