Indy Lights back after hiatus with halo, IndyCar tests - The Race
Skip to content
IndyCar, Junior

Indy Lights back after hiatus with halo, IndyCar tests

The Indy Lights Championship’s return for 2021 has been confirmed, with halo protection devices added to the cars, $1.25 million IndyCar prize drive for the winner and IndyCar tests for the top three in the series standings.

The championship took a sabbatical for 2020 in light of the COVID pandemic, while new IndyCar and Indianapolis owner Roger Penske said it would be a “detriment” to put the championship on for six or seven cars. 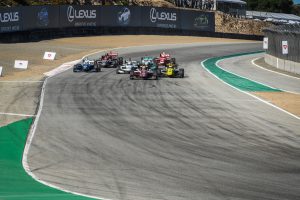 However the series – owned by IndyCar and operated on its behalf by Andersen Promotions – returns with a 10-event, 18-race calendar which will receive a shake-up from previous years and will be announced before the St Petersburg IndyCar race on October 25.

As in previous years as the top championship on the Road to Indy ladder, a prize of three races including the Indy 500 will remain for the champion – which in part helped the last title winner Oliver Askew to make his series debut with Arrow McLaren SP for 2020.

The Dallara IL-15 Indy Lights chassis remains but will run an added Halo device this year. It follows IndyCar’s switch to the aeroscreen protection device for the 2020 season which has been well received.

The Formula Regional Americas champion will receive a scholarship for the first time, with Linus Lundqvist set to receive that after already wrapping up that championship in 2020.

Both the Indy Pro 2000 and USF2000 championships – the second and third tiers on the Road to Indy ladder respectively – continued this season in the absence of Indy Lights.

Kyle Kirkwood – who won the second-tier Indy Pro 2000 title in 2019 – has had his scholarship honoured for 2020, meaning he’ll join the yet-to-be crowned Indy Pro 2000 champion from this year in getting a scholarship for Indy Lights next season.

“After careful planning with the IndyCar team, we are pleased to confirm the exciting addition of a season-ending IndyCar test at the Indianapolis Motor Speedway soon after the 2021 season,” said Dan Andersen, owner and CEO of Andersen Promotions.

“We continue to explore additional ways to strengthen the Indy Lights championship. In the interim, we want to spread the word that Indy Lights will be back and it will be stronger than ever.”

“We are firmly committed to ensuring its continued success.”