'If you're not there, you don't exist' - Bourdais' comeback - The Race
Skip to content
IndyCar

‘If you’re not there, you don’t exist’ – Bourdais’ comeback

Sebastien Bourdais’ recent expanded AJ Foyt IndyCar deal naturally prompts questions about whether the team can step up its performances to meet the level of a man who’s not only a four-time Champ Car champion but who – perhaps more relevantly – won races with his past two underdog teams.

But Bourdais sees it as lucky that he’s even been given a shot – something that’s tricky to believe from a driver with his CV.

“I spoke to quite a few different teams and things but when when you’re not in the game anymore, you’ve got nothing to sell,” Bourdais told The Race ahead of his IndyCar return at Indianapolis this weekend.

“If you’re not there, performing, you just don’t exist. So at least those guys [Foyt] were willing to give it a shot and have me help out and try and rebuild the team.

“I think there are very good people involved. And I think we can do something. It’s going to be up to us to, to go from words and wisdom to reality.”

Bourdais’ record in the States is much more reality than words. He moved out there in 2003, and won 31 races in 73 starts in Champ Car before a season and a bit in Formula 1 with Toro Rosso didn’t quite work out. He was replaced by future DJ, Jaime Alguersuari.

“The end of ’19 was not the way I wanted to retire from IndyCar by any means” :: Sebastien Bourdais

Post-Champ Car, the Le Mans 24 Hours was a happier hunting ground for Bourdais in LMP1 with Peugeot. He scored three runner-up finishes in four attempts (2007, 2009-2011), but a return to the States after F1 didn’t work out was always likely to be the case given what he had achieved with Newman/Haas.

The return came in 2011 with Dale Coyne, and while another championship title hasn’t been part of the yield since, six race wins were added between 2011-2018 despite Bourdais never being with a truly frontrunning team.

Perhaps the best way to summarise these years is by the fact that Bourdais has not been beaten by a team-mate who has contested the same number of races (he contested part-schedules in 2011, ’12 and through injury in 2017).

The fact that anyone would want to let Bourdais go seems quite unbelievable. He saw off Santino Ferrucci at Dale Coyne in 2019, when rookie Ferrucci had plenty of praise in America, but Bourdais, now 41, was dropped for 2020 late last year and the team drafted in Alex Palou instead.

It left Bourdais scrambling for a seat anywhere in 2020, and a deal for four races was put together with AJ Foyt – but ultimately went unfulfilled as all four of those races were cancelled as part of IndyCar’s coronavirus induced calendar reshuffle.

Luckily Bourdais was bailed out by JDC Racing with a seat in the IMSA SportsCar Championship and has been able to stay sharp alongside Joao Barbosa, who he won the 2014 Daytona 24 Hours with. The pair are second in the championship with four races still scheduled.

“The end of ’19 was not the way I wanted to retire from IndyCar by any means,” says Bourdais, hinting at another reason he wants to return: for his legacy.

“Christian [Fittipaldi, team advisor], and the whole JDC team, helping those guys threw me a lifeline. And that was really cool. Because otherwise, as late as this happened, there really wasn’t anything left.

“I told them that, if they still wanted me, after me kind of bailing out on them next year, that I’d be very happy to keep on helping them. But the ball is in their camp. I think the relationship’s still good, but I don’t know exactly what the situation is going to be. Hopefully, I can be a part of it.”

So there’s the slightly unusual situation that Bourdais could win a title and not defend it as he’ll switch his attention to his IndyCar return from a rare full-year in the DPi top category in IMSA.

Caution over the move to Foyt from observers is fair. Since Bourdais’ IndyCar return in 2011, the squad has finished in the top 15 in the drivers’ championship just twice, running three drivers in all but three of those years. That’s a top 15 success rate of 2 in 26 opportunities.

Its only win in that period came with Takuma Sato who won the Long Beach GP in 2013 (below). That’s over seven years ago – and it’s Foyt’s only triumph since the US single-seater reunification. It was a championship and Indianapolis 500 winner in the early Indy Racing League days, then was swamped as the big teams flocked across.

Therefore, The Race put it to Bourdais, given he is approaching his career twilight, did he have to think hard about returning with a team that has struggled for results, or was it just a no-brainer to return to full-time IndyCar action full-time?

He confirmed it was a no-brainer, and adds: “I mean, they know they’ve got to turn that programme around quickly. And hopefully, I can bring my piece to the puzzle, and help them do that.

“And so, from the get go, I would say, everybody wanted to try and see if there was an opportunity to make something happen in ’21.

“It also comes with a duty. When you’re driving for teams like this, you even more want and need to represent it well” :: Sebastien Bourdais

“The team wants to keep on staffing up as much as possible, and try and get some reinforcement if we can. But I’m very happy to be working with Mike Colliver and Daniele [Cucchiaroni, engineers].

“Those guys now have pretty much a year of working together and they appreciate each other and I think they complement each other very well. I really liked the vibe that was there, between both Mike and Daniele, when we were at the simulator. I think there’s definitely a good synergy there and hopefully we can capitalise on that.”

Aside from the good feeling he has with the personnel and the team – he got crucial aeroscreen experience at the pre-season test at Austin with them – joining Foyt has another benefit to Bourdais’ CV. The chance to race for arguably IndyCar’s most successful driver and one of the best in American racing history.

It won’t be the first time Bourdais has raced for a legendary name either. His Champ Car titles came with Newman/Haas, but racing for ‘Super Tex’ Foyt – four-time Indianapolis 500 winner and Le Mans 24 Hours victor among so much other success – brings with it challenges as well as a name above the garage.

“Yes, for sure, but it also comes with a duty,” he offers when asked about the pride of adding another ‘name’ to his list of employers.

“When you’re driving for teams like this, you even more want and need to represent it well and to give it its full potential and exposure.

“AJ is synonymous with success and racing legacy. You really want to be worthy of it and to put that thing [the car] in front so hopefully you can put a smile on his face again and give him something to get excited about.”

There hasn’t been much to get excited about for the team in 2020, although Dalton Kellett has belied his average junior CV to deliver some impressive if inconsistent performances at times.

Tony Kanaan (below) and Charlie Kimball have both had flashes of brilliance, Kimball probably performing better than his 19th in the championship shows and Kanaan’s 22nd comes from just six starts in his farewell season – that he has already confirmed likely won’t be his last so he can celebrate with fans robbed of that opportunity by coronavirus.

Bourdais isn’t expecting much from the three races ahead – a double header on the Indianapolis road course this weekend and a season finale at St Petersburg where Bourdais lives, at the end of October – but a strong run could be worth seven figures to the team with the 22 entries that qualify for the Leader Circle funding programme based on the top 22 in points.

It’s also crucial seat time for Bourdais. The aeroscreen has altered set-ups from 2019 exponentially due to its added weight and the effect it has on handling and drafting. Getting up to speed and helping the team to improve with three races before 2021 will be vital in extra information gathering and getting ahead. 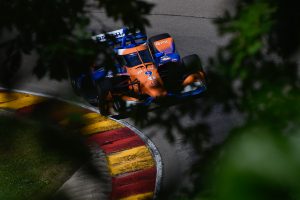 Why IndyCar’s best driver is relying on guesswork
Read more

“This is really the beginning of our 2021 effort,” Bourdais adds. “You know, it doesn’t really matter so much as far as what results we bring from from those couple of races. If we get lucky and we align things and we are competitive, great. That would mean that we have actually an even better platform than we thought.

“The whole point is to run and validate or invalidate whatever. Kind of trials, for real and evaluate things. Just trying to limit how far behind you start, pretty much.”

The struggle is real for this partnership, especially given how hard coronavirus has impacted the smaller teams. Whether you feel Bourdais is lucky to have a full-time programme or think he should have held out for a team with better recent performances, it’s only the results the team can put on the board from now that will show which was the right decision for him.

However, remember Bourdais’ opening words: “If you’re not there, performing, you just don’t exist.”

Now he exists, and has the chance to breathe life into one if IndyCar’s biggest contradictions: one of its least successful teams owned by one of its most successful drivers.