How real are Newgarden's IndyCar title hopes? - The Race
Skip to content
IndyCar

On the weekend Team Penske celebrated the 50th anniversary of its first IndyCar victory, Josef Newgarden snapped a nine-race winless streak that felt like it lasted a lifetime.

Like last year, Newgarden is arguably at the top of his game, but the bad luck of 2020 has crept in during the first half of the 2021 season before he and Penske finally overcame the jinx.

With six races remaining, Newgarden is 69 points behind with 324 on the table. It sounds like a lot available, but when you have more drivers than ever capable of winning races and a host of drivers famous for consistency to compete against, as well as one of the most exciting junior drivers in American single-seaters for years, it’s tough.

“We’ve just got to be the best version of ourselves every weekend,” said Newgarden following his Mid-Ohio win.

“It sounds cheesy, but it’s the truth. It’s pretty simple, that’s our approach. Every weekend is individualised. They all count. Ultimately these next six races are all going to add up to something.

“We don’t have the luxury of room for error. It’s always nice when you do. We don’t. But I don’t think that changes our approach.

“We’re out there to maximise whatever our potential is every weekend.

“Mentally, we’re not in a different spot, but the reality is what it is. It’s not too bad. We have to fight for sure, but it’s just a harder fight than we would like.”

With so many intricacies to this battle, The Race has broken down some of the key elements and given ‘for’ and ‘against’ arguments for whether Newgarden is really in the championship hunt.

For – he’s driving better than ever

Newgarden has scored three poles in a row, and while the series has had eight winners in 10 races this year, when it comes to one-lap pace Newgarden’s arguably been the star, even if Colton Herta has kept him honest.

Like last year, there’s so few instances of big mistakes from Newgarden to point back to – the Barber crash being the only one really – and it’s clear that just from a driving perspective he is a factor in the victory discussion every single weekend.

Replay of the incident involving multiple cars on Lap 1 at @BarberMotorPark.

“I feel like we’re on similar pace than we were last year,” said Newgarden when asked by The Race if he felt he is driving better than at any point previously in his career.

“I was really happy with where we were at last year and some things didn’t pan out.

“We’ve been the same this year as far as our working relationship and sort of our speed and all that.

“Just kind of same story but a little different twist this year.”

Over the same period of races – six remaining – Newgarden outscored eventual champion Scott Dixon by 101 points in 2020. He needs to outscore Palou by 70, but obviously that’s easier said than done!

The driver in 11th gets 19, and then each position following gets one less point in descending order up to 25 and onwards, which all receive five points.

However, if we’re going to make this argument for anyone, Newgarden’s the one person in recent history who has proven he can erase this kind of gap and go on a tear of race wins and podiums. His average finish over the last six races last year was 2.83!

In 2019 and 2020 Newgarden finished the year with average start and finish positions between 5-6, but his finish position is down at 8.3 this year owing to some of his bad luck. He brought that rating up last year and he can do it again in the climax of 2021.

Of the six races remaining, Nashville – Newgarden’s home race – is new, and Laguna Seca has only run once, back in 2019, while Newgarden’s been in IndyCar. He finished eighth, but sealed the title.

Gateway is one of his best circuits, where he has an average start of 2.8 and finish of 5.6 – per Racing Reference – including a win last year. He also won at the Indy GP last year, and a fourth at the venue earlier this year points to Newgarden having improved at what was one of his worst venues statistically.

That leaves Portland and Long Beach as the only question marks. At Long Beach, along with the Indy 500, it’s one of the race wins missing from his resume and two podiums in eight races with an average finish of 10.9 certainly isn’t the kind of record we’re used to with Newgardeb.

Newgarden’s only visited Portland twice and finished 10th and fifth.

.@josefnewgarden could see the red and white #8 of @Ericsson_Marcus closing in the last few laps.

Listen to how Newgarden and Tim Cindric communicated through the end of the #Honda200 to get their first win of the season.
#INDYCAR // @Team_Penske // @Mid_Ohio pic.twitter.com/hmTc2PCivN

But series leader Alex Palou has only raced on one of the remaining six tracks before. Palou’s only blotches on his season copybook are at street courses, and two of those remain as well.

That should give Jo-New fans a bit of hope.

Against – Ganassi is running riot

Just at the perfect time of the season, all three Ganassi cars are firing on almost all cylinders. Palou is the points leader while Scott Dixon has finished in the top 10 at every road and street course race this year despite his fair share of misfortune acting against him.

And now that Marcus Ericsson has added an IndyCar win and erased a seven-second gap to Newgarden in the Mid-Ohio race to pressure him all the way to the chequered flag, this is a united team which has won four of the 10 races.

Newgarden faces the possibility of having to take it to Ganassi alone, as the relative inconsistency of Will Power and Simon Pagenaud – not to mention Pagenaud’s different driving style making his data less relevant to Newgarden – means the team isn’t as united and in-form as Ganassi is.

That has to be a worry for Newgarden, but he’s been consistently front-running all year and can take solace in the fact he’s been in similar situations before where he’s the sole car in the title fight.

Against – Winning is hard!

It’s never been easy in the IndyCar Series, but already with six races to go the number of winners from last year has been beaten, and those eight winners from 10 races have come from six different teams as well. The series is more open than ever, and you still feel like there’s seven or so drivers who could add wins, too.

For Newgarden, he’s extremely unlikely to win this title without at least one more win, and two would make it much more likely. Becoming the series’ first three-time winner in 2021 when only two drivers have won multiple races is going to be tough.

Especially when you start matching up the non-winners to the races. Incredibly, Alexander Rossi still doesn’t have a win in two calendar years and his team won the St Petersburg street race with Colton Herta earlier in the season, so that’s a great shot for him at Nashville and he’s won the last two Long Beach Grands Prix.

Romain Grosjean took pole at the Indianapolis road course so a return visit there could be fruitful – while Simon Pagenaud and Will Power have had some of their best races there too. Power won the last race at Portland as well, while 2018 Portland winner Takuma Sato is always strong at Gateway, where he won in 2019.

Against – there’s an unseen fight Palou is winning

There’s one area that Newgarden and Penske have really taken advantage on in recent years and that’s pitstops, but Palou’s bridging the gap in this area.

In the last two races, Palou has taken significant time out of Newgarden across a race on in- and out-laps. At Road America it was 0.9625s gained for Palou and at Mid-Ohio it was 1.8644s. 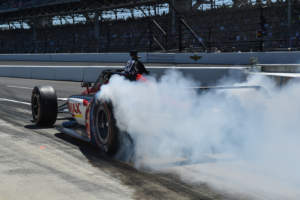 Of course, things like traffic and preserving tyres can affect these numbers, and Palou and Newgarden weren’t necessarily racing each other at Mid-Ohio. But when things are so close and overtaking is difficult on track these margins can be huge in various scenarios.

Newgarden has an intangible ability to turn things up to 11 when in under-pressure scenarios though, and of course we’ve merely taken a two-race sample set. It’s not an area he’s particularly lacking in, but one Palou is certainly maximising at the moment.

Against – It’s not just Dixon this year

While you just don’t know what level Arrow McLaren SP are going to turn up at each race at, Pato O’Ward has won two races and has surprised the opposition with his ferocity, ace car control and his ability to fight adversity.

He, like Dixon and Palou, are capable of winning multiple races.

Last year – and arguably the two before – the last six races were a straight fight between Newgarden and Dixon. Now Palou leads and O’Ward is capable of great things.

So Newgarden needs to outscore Palou by 12 points per race, but there’s two other drivers he’s got to beat this year too, and they are hanging around deep into the season unlike some of the two-horse races of the recent past.

One thing’s for certain. It will be exciting!

The conclusion – don’t count him out!

We learned last year not to write off this Josef Newgarden 2.0, or whatever version he’s up to now.

The point is he’s driving at an almost unmatched level, he’s in contention every week and the team has had enough bad luck to last a life time. You’d think it’s time some came his way.

Of course, he’s not only fighting Palou but O’Ward and Dixon too, but we saw Newgarden crush Dixon in the latter part of 2020 and come so close to claiming the title.

He doesn’t need a third crown to earn the label of one of, if not the best driver in the series, but with another Indy 500 defeat earlier in the year, all the focus is on the championship.

If someone beats Newgarden, it will likely be spectacular and well-earned.