Since F1 2021’s announcement trailer we haven’t received any other details about Codemasters’ upcoming game, although what was made clear is that the ‘Braking Point’ story is one of its biggest selling points.

The character of Devon Butler will return having previously appeared in F1 2019’s career mode as a rival driver that followed you from Formula 2 to Formula 1.

Aiden Jackson and Casper Akkerman are the other two named characters although we don’t know yet exactly what their role in the story will be.

To some, the emphasis on creating an original plot for F1 2021 has EA’s stamp all over it since they purchased Codemasters earlier this year. In their FIFA game series there was ‘The Journey’ story that ran as a trilogy from FIFA 17 to FIFA 19 and has since been sort of replaced with the Volta story in FIFA 20 and 21 that allows you to customise your character’s appearance.

However F1 2021 won’t be Codemasters’ first foray into telling a story in one of its racing games, most recently F1 2019’s career mode had the beginnings of a narrative with its Formula 2 introduction.

You took part in three scenarios, the first where you had a car issue and were told by the team to let your team mate Lukas Weber through.

The second puts you behind the wheel as you leave the pits with a new front wing after your rival Devon Butler crashed into you. He is given a five second stop-go penalty and your aim is to finish the race ahead of him.

Finally there’s a five lap race in Abu Dhabi where, regardless of how well you did in the earlier scenarios, you’re tied on points with Butler and have fewer race wins which means you have to cross the line ahead of him to win the Formula 2 drivers’ championship.

At the end of each scenario you’re given one of two cutscenes depending on whether you finished ahead of Weber/Butler or not. Ultimately all three of you go on to land a seat in F1, replacing some of the real-life drivers in the process.

From that point on there’s no more cutscenes or direct story as it morphs into a normal career mode, albeit with occasional press clippings of quotes from Weber and Butler that are sent to you via the in-game email.

There have been a number of racing games that have attempted to tell a compelling story and the most notable is EA’s Need for Speed series.

Nevertheless EA has experience with creating stories and integrating them into both racing and sports titles, so it can definitely help Codemasters to create a more detailed plot than was seen in F1 2019’s career mode.

Codemasters also has previous experience of narrative orientated racing games, even before F1 2019, as shown with the TOCA Race Driver series.

People often point to the third game as an example yet, while it might be the best overall game of the trilogy, it has by far the weakest attempt at a story. It definitely tried to make you feel as if you were a racing driver and give a sense of progression, but what many describe as a story can be better described as linearity with occasional cutscenes.

When you start the game your engineer Rick (above) sets the scene before introducing the Clio Cup and Global GT Lights racing series before asking you to pick which one to take part in.

From there you climb up a total of 32 tiers, the final two taking you to what is essentially Formula 1. That said the most of the licensed F1 cars are ones from Williams, so the penultimate championship is a grid made up entirely of Williams FW27s from the 2005 F1 season.

So the start and end points of the World Tour mode make sense, but how you inevitably end up racing F1 cars is far from plausible. Within a fifth of the World Tour mode you can hop from Clio Cup, to rallying, buggy racing, truck racing and then monster trucks before, eventually – against all logic – ending up in faux-Formula 1.

That’s not to say you couldn’t make your career progression at least somewhat grounded since you could stick exclusively to road car racing for the first four tiers before jumping over to Formula Ford. Even via that route though you would’ve still raced all over the world before having even logically made a name for yourself.

The first two TOCA Race Driver games had fully fleshed out stories though with multiple characters.

Contrary to its sequels, the first game told its story from a third person perspective with you playing as Ryan McKane. In a plot that’s as cliche as they come, you’re the son of a successful racing driver Kyle McKane who died in a crash shortly after being taken out by a rival racer.

TOCA Race Driver 2 had first-person cutscenes and recurring characters including the charismatic, Scottish engineer Rick. Along with him was your agent Kat Silver and a number of rival racing drivers, most notably Cesar and Stellan.

The aim was to qualify for the Masters Grand Prix series, the game’s equivalent of F1, and you got there via beating all the other drivers in a series of challenges all filmed for a reality TV show and winning a seat with the Shark racing team.

Over the course of the game how you perceive certain characters changes given what’s revealed in the cutscenes, making them genuinely compelling and telling an actual story.

Of course it’s not the deepest plot in the world and it has no branching paths. There was only one ending and while there were occasions where you could pick one of two different championships to race in, it only changed how you unlocked the next cutscene and didn’t influence the story at all.

For the predetermined story to make sense you had to be victorious in every championship and if you weren’t you just had to retry that event instead of the narrative going down a different path.

We don’t yet know whether F1 2021’s Braking Point story will have different outcomes or routes the story can take, but if it does then it would be a game changer. F1 2019 had two versions of each cutscene depending on whether you finished ahead or behind the relevant driver but it had little impact on your progression from F2 to F1.

Equally a polished presentation and decent length for the Braking Point story would put it significantly ahead of their previous efforts. 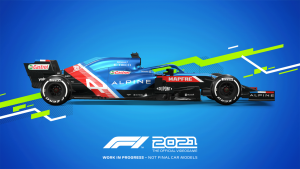 Even in between TOCA Race Driver 3 and F1 2019 Codemasters sprinkled in hints of an overarching plot with the intention of trying to give players a sense of what it’s like to be a racing driver, which has been a recurring theme in its games.

In Dirt 3 for example throughout the Dirt Tour career mode you were often talked to by Ellie, your business agent, Jack your chief mechanic and Christian your PR manager.

You only ever got to hear their voices and to begin with it’s little more than a minimalist tutorial but it still showed an intention to immerse the players as a racing driver and make the game feel not soulless.

The spiritual successor to the TOCA Race Driver series, the Grid franchise, gave players a sense of progression in the first two games especially. You started off doing one-off races for other teams before setting up your own team, buying cars and hiring a team-mate.

The end goal was to increase your individual driver rating as well as your team’s ranking and eventually go head to head with the much hyped Ravenwest team.

It’s a far cry from an in-depth story but it used head to head race formats and cinematic music to create a much more dramatic experience than you would get in a normal racing game. Aside from the much more theatrical tone and lack of pre-rendered cutscenes, it’s not dissimilar in approach to the much fabled TOCA Race Driver 3.

Codemasters has been, with varying levels of depth, trying to tell stories or establish immerse the players in the role of a racing driver for years. EA’s takeover likely had little to do with the decision to make the Braking Point story we’ll see in F1 2021.

Initial impressions suggest that Braking Point will far exceed what Codemasters has attempted in previous games. With EA’s experience at telling stories in racing and sports games, motion-capturing actors and everything else needed to tell an engaging story in a video game – this could be the start of a much praised narrative direction for the F1 games.