F1 2022 cars will be even heavier than planned

Formula 1’s next generation of cars will be even heavier than planned next year, with the minimum weight raised further to 790kg, 100kg more than the start of the V6 turbo-hybrid era.

The 2022 rules are a major departure from F1’s current cars, with overhauled aerodynamics and a range of restrictions designed to make it easier for drivers to follow and race one another.

It was initially expected that the new 2022 cars would weigh 775kg, an increase of 23kg from the current designs, because of the move to 18-inch wheels and some safety related changes.

The FIA has recently rubber-stamped another 15kg increase. This is related to increased safety improvements on the chassis.

Cars will need to weigh 790kg without fuel. This season cars have 110kg of fuel on board at the start. The minimum mass rule does not explicitly specify that it includes the driver anymore, but within that 790kg will be a minimum weight for a driver, their equipment and their seat of 80kg. 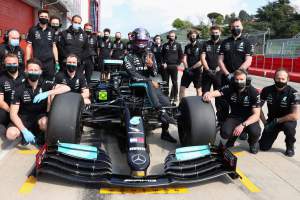 Drivers have repeatedly complained about the weight of modern F1 cars in recent years, with the move to complex and heavier hybrid engines part of the problem.

The cars were then made bigger in 2017 as part of a push to make F1’s machinery faster and look more aggressive.

But there have also been fundamental safety improvements contributing to the gradual increase as well, with the addition of the halo driver safety device the headline item.

Even though this year’s cars were carried over from last year, there was still a 6kg weight increase that is partly explained by Pirelli strengthening its tyres for safety reasons.