After narrowly losing out on the win in last month’s 2020 final, Frenchman Lohan Blanc won the 2021 WRC eSports final to become a three-time WRC eSports champion.

His closest competition was the 2020 champion Sami-Joe Abi Nakhle who won 12 of the 13 online qualifying events before the in-person final in Greece. 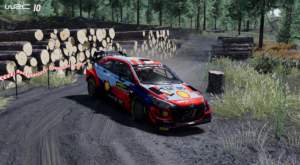 Of the 15,000 people who competed in the online time-trials, eight qualified for the grand final with Panagiotis Zeniou taking the ninth and last spot after winning the separate Greek wildcard event held on the morning of the grand final.

All nine drivers took part in the first eight stages and only the fastest four made it through to the broadcasted final with the remaining four stages.

The same four drivers who made it through to the end of the 2020 WRC eSports Grand Final also proved to be the quickest this time, despite the change in game from WRC 9 to the newly-released WRC 10.

Lohan ‘Nexl’ Blanc (below) was the fastest and had a 21 second margin over the defending champion Nakhle. John Bebnowicz-Harris, known as izamusing, and Dylan Noel completed the top four.

The time differences between the drivers were reset and meant everyone was on a level playing field for the final four stages.

Blanc won the opening two stages to build up a lead of 4.5 seconds to Nakhle. However that second stage victory came from a mistake by Nakhle in the final split as he overshot a hairpin turn and needed to reset back to the track.

That reset gave the Lebanese driver a five second penalty and meant he lost the Acropolis stage by 2.8 seconds.

Nakhle won the penultimate stage by 4.2 seconds to reduce his deficit to Blanc down to 0.397s heading into the final 20km stage.

The last stage was held in changeable conditions as it started dry and ended in stormy conditions which left the drivers with a difficult choice to go for either the slick or wet weather tyres.

The decision to opt for slicks gave Blanc an early lead over Nakhle with it as high as 30 seconds at one point. However the change in weather also turned the tide in the favour of Nakhle but he wasn’t able to catch up in time and ended 13 seconds down to the Frenchman.

For victory in the final Blanc won a Toyota Yaris GR road car, the same prize that Nakhle got for winning the 2020 final.

Having won three of the six esports World Rally Championships held so far, Lohan 'Nexl' Blanc is rally gaming's benchmark. This is his journey from PlayStation 2 games to the top of his discipline

Ahead of the start of the F1 Esports Pro Championship next month, all 10 teams have revealed their driver rosters for the upcoming season

Our gaming expert Nathan Quinn takes you through the mobile gaming options on the market, weighing up the approaches each take in terms of going for a realistic approach or a more catch-all arcade style