Formula E teams have successfully fought off a push to cut testing before the start of the 2021/22 season, The Race has learned.

The next traditional pre-season test will be on exactly the same week across the end of November and beginning of December as it was in 2020, and will run to the same format of three days on track and one media day.

Initially Formula E Operations, the promoter and organiser of the world championship, wanted just two days of testing at the Circuit Ricardo Tormo.

This was because FEO took the view that in the last season of the four-year cycle of the Gen2 era teams did not need a high level of running ahead of the opener.

However, the teams lobbied for three days at Valencia and the subsequent plans were stretched to four days, with one given over to media asset collation and three allowable for testing.

The running days in Spain have therefore now been set for Monday November 29 and Wednesday/Thursday December 1-2.

Testing in Formula E usually runs to a 13-day (plus six for manufacturers that supply customer powertrains) regulation per season.

However, after the decision to implement a dual-season homologation for the final two seasons of Gen2 racing last summer, the testing cut-off of April 30 means that manufacturer testing will not start again until Gen3 running begins next year.

“There was a question asked whether simply we wanted two or three days, and I think it was with the backdrop of the fact that we’re not introducing new hardware because of the homologation freeze,” Mercedes EQ team principal Ian James told The Race last week.

“To be frank, three days is not a huge difference from a cost perspective.

The regulations state that each season the championship promoter (FEO) will organise “a maximum of six days of official tests of one, two or three days, including a minimum of three days before the first competition of the championship”.

Two days of the six ‘promoters days’ allowed are allocated to what is billed as a ‘rookie test’.

The Race understands that FEO is intending to re-establish the rookie test for 2022 after it was sidelined this year because its intended slot at Valencia was lost when that event became a double-header.

The regulation regarding rookie testing in Formula E was recently changed and now only “drivers who have never participated in a Formula E competition, or who have never taken part in two or more official collective test days or held an e-Licence” can run at the event. 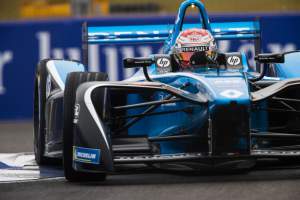 Previously, drivers that had only tested but not raced were able to take part, with Sam Dejonghe (Mahindra), James Rossiter (DS Techeetah) and Jann Mardenborough having been part of all three rookie test days from 2017 to 2019, all of which were all held in Marrakesh.

Rossiter, who is now the sporting manager of DS Techeetah, became non-eligible after he took part in a free practice session at the 2020 Marrakesh E-Prix when he covered for an unwell Jean-Eric Vergne.

Diriyah and Berlin are believed to be under consideration by FEO for the 2022 rookie test, which would take place the day after the scheduled races.