Top five leftfield Formula E signings, and how they fared

The inking of Jake Dennis’ signature last week by BMW i Andretti caught many off-guard but in the overall scheme of things within Formula E it was far from the first leftfield selection bombshell.

Quizzical looks on the faces of paddock members when such appointments are made have been reasonably regular in Formula E’s six-season history. 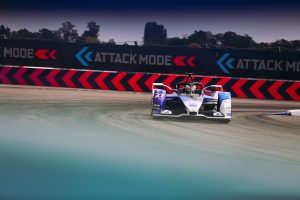 In the first season especially there were some intriguing choices which were, let’s face the reality here, based on nothing other than how many ‘greenbacks’ were stuffed in drivers’ overalls.

From an out-of-shape Salvador Duran replacing Katherine Legge at Punta del Este in 2014 to the Swiss/Welsh/Greek, Tom Pryce tribute-helmet adorned, Alex Fontana for the Trulli team at Battersea Park in 2015, many choices triggered confusion and wonder in equal measure.

For this feature, we shall not dwell on such eccentricities in the first nascent Formula E season of 2014-15, but instead concentrate on rather longer-term (at least that was the idea!) choices that were met with a degree of curiosity – at the very least. 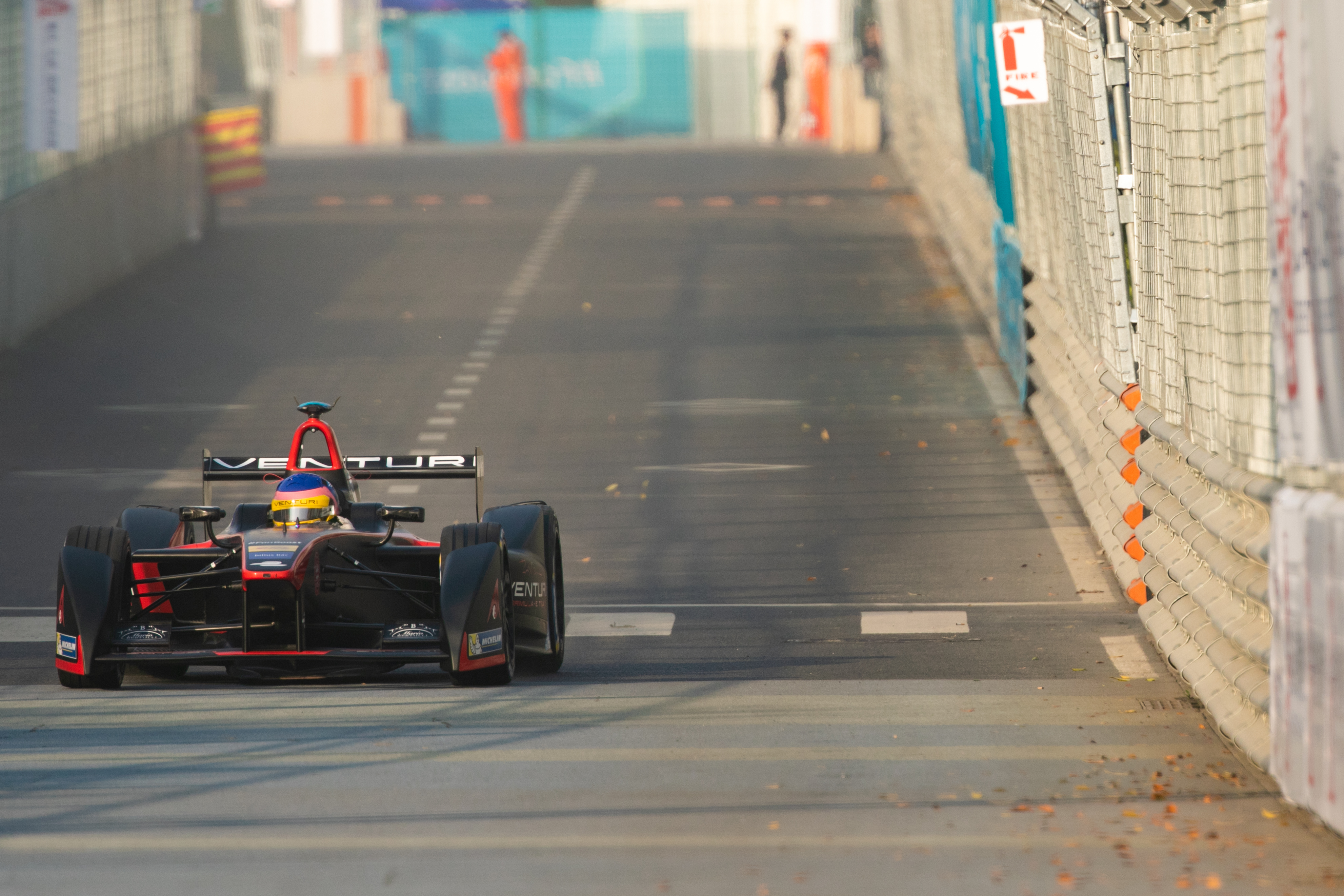 Have oversized overalls, will travel.

In the late summer of 2015 it was Formula E’s turn to take in the nomadic package of Jacques Villeneuve’s inconsistent talents.

At the pre-season Donington Formula E test, Villeneuve was relaxed as he sat with team-mate Stephane Sarrazin and friend Nicolas Minassian enjoying an open-air buffet at the back of the garages like a scene from a mid-1950s F1 paddock. 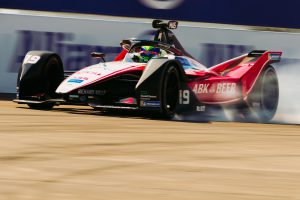 It was a surreal sight but one perfectly in keeping with Villeneuve’s laissez-faire approach, which had first manifested itself with a rambling and formative early career across Italy and Japan in the early 1990s.

A quarter of a century on and Villeneuve was having a kind of blissed-out racing mid-life crisis and signed a deal with Venturi to replace Mahindra-bound Nick Heidfeld.

The deal was orchestrated by his former manager and legendary Reynard ‘sales whisperer’ Rick Gorne. Even in the nascent Formula E paddock, Villeneuve arrived meteor-like, shocking some but delighting most, including a grateful Alejandro Agag – who stirred it enthusiastically as his electric odyssey gathered more and more momentum. 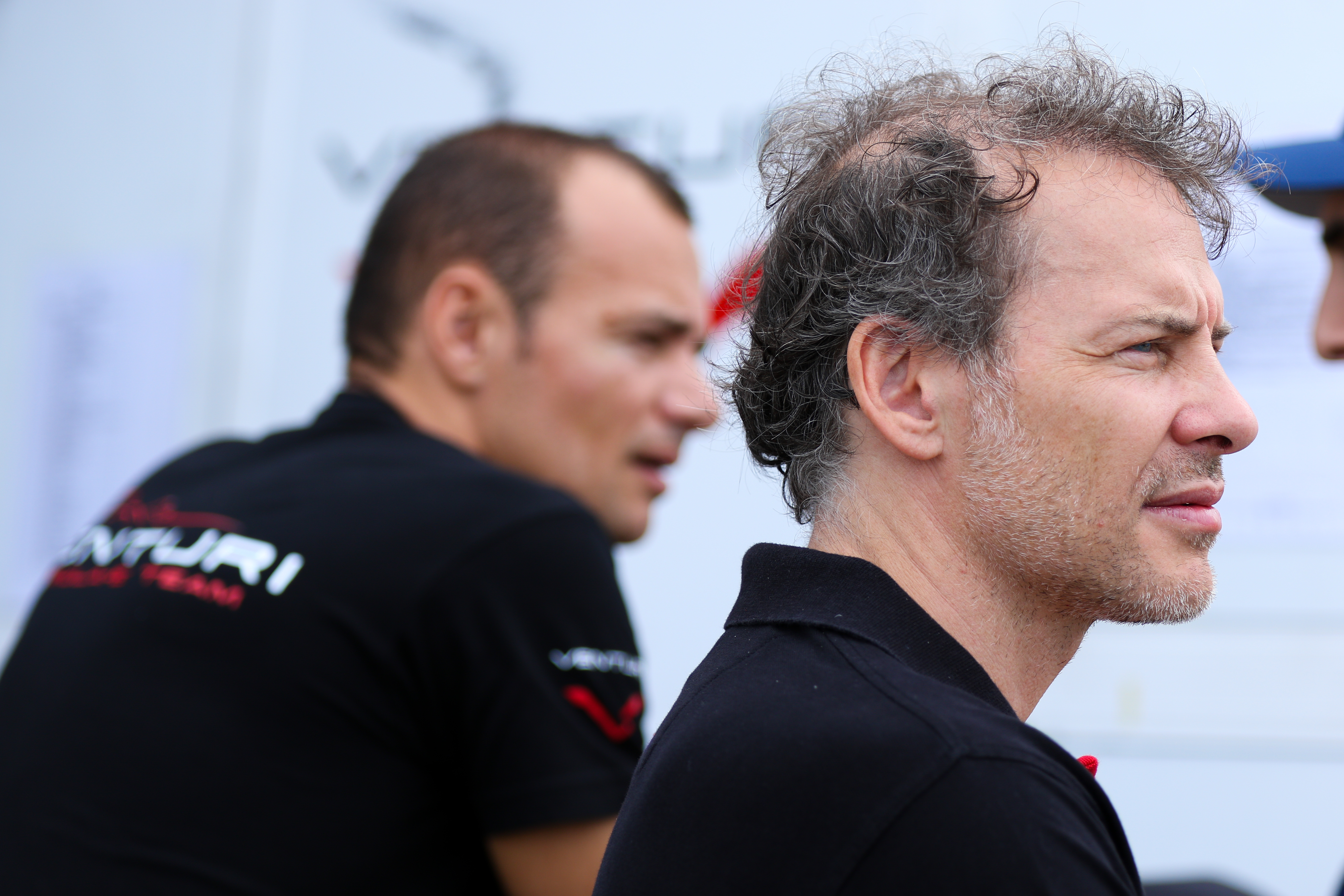 When reality kicked back in though it was probably always doomed to fail as Venturi, still finding its feet technically and operationally, was far from the ideal place to cope with a star of Villeneuve’s idiosyncrasies.

Three fractious races (the Punta del Este round especially amid sizeable spare parts consumption) in it was all over, and as 2015 became 2016 that famous wandering helmet and the oversized overalls were off to pastures and cockpits new. 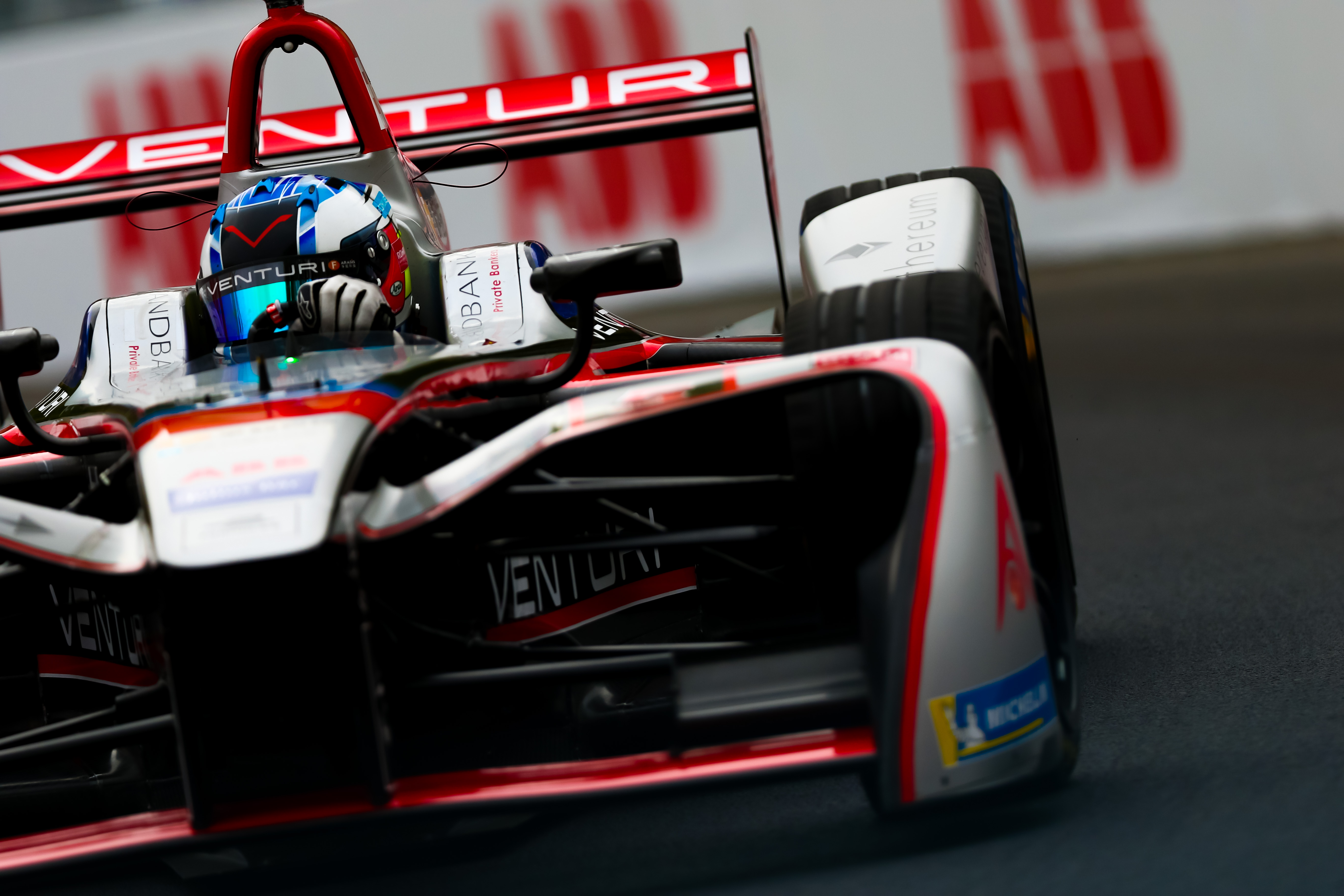 Engel, one of the top GT drivers of his generation and a mainstay of Mercedes’ customer programmes for over a decade, was a surprise choice for Venturi in the third season of Formula E.

Having long since dropped off the single-seater ladder after two strong British Formula 3 campaigns in 2006 and 2007, he was drafted in as team-mate to Sarrazin after Villeneuve’s ignominious exit and Mike Conway being told to concentrate on his blossoming Toyota sportscar career.

When Venturi’s new technical partner ZF were announced at Donington the same day that Engel was revealed the popular narrative was that it was all tied in to attracting Mercedes to Formula E. 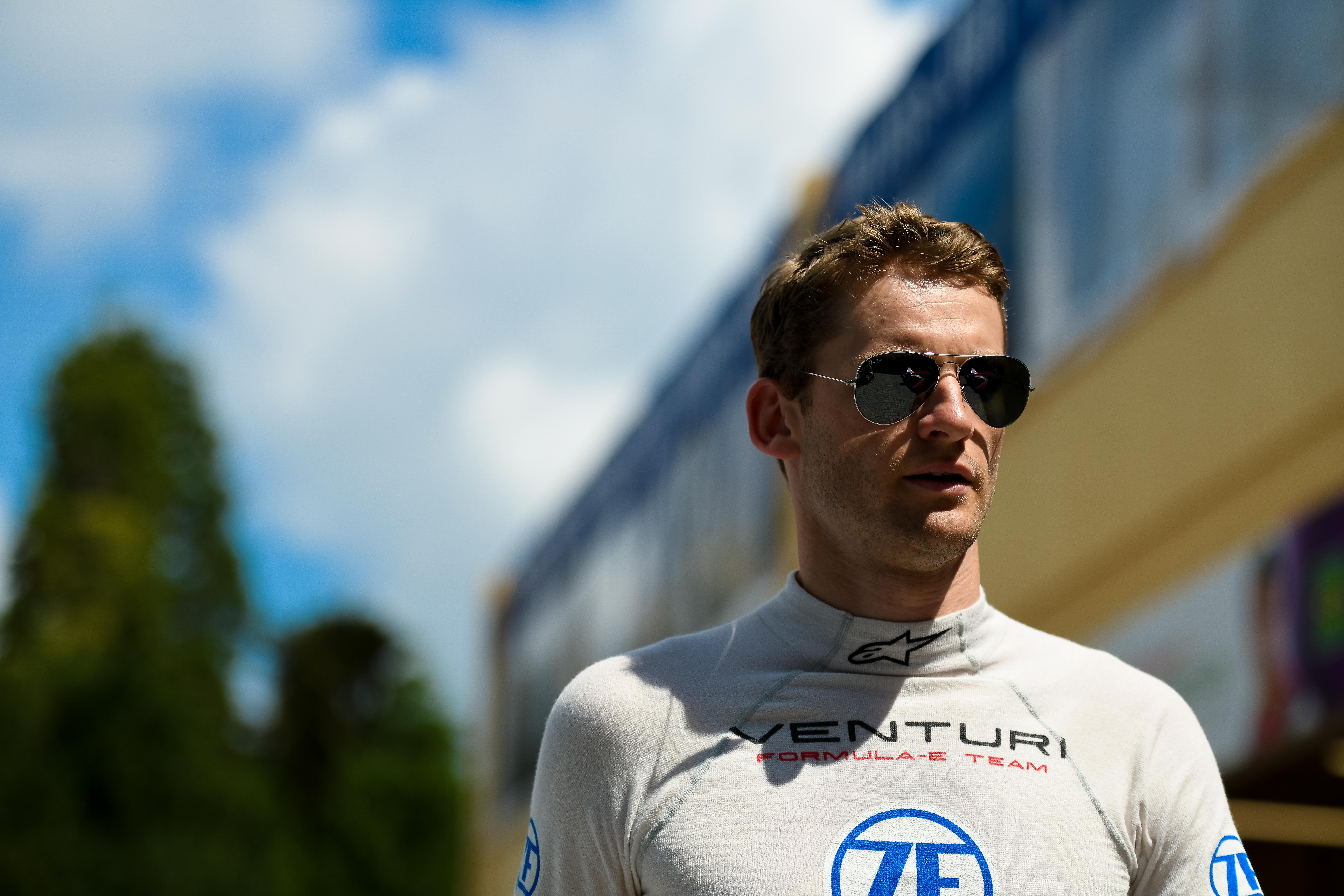 However, Engel’s appointment wasn’t quite as exotic as that, but rather it was harnessed via a close friendship with then-minority shareholder in Venturi Marc Ginsdorf.

In reality, Engel’s drive didn’t start the perceived chain reaction end-game which concluded with Mercedes’ pilot involvement with Venturi the following season. That was when it had engineers embedded with the squad prior to its own soft launch in 2018 with HWA Racelab.

Engel had a solid Formula E career which lasted two seasons where he showed flashes of podium-challenging performance on occasion, although he often succumbed to appalling luck with a variety of reliability issues when in those positions. 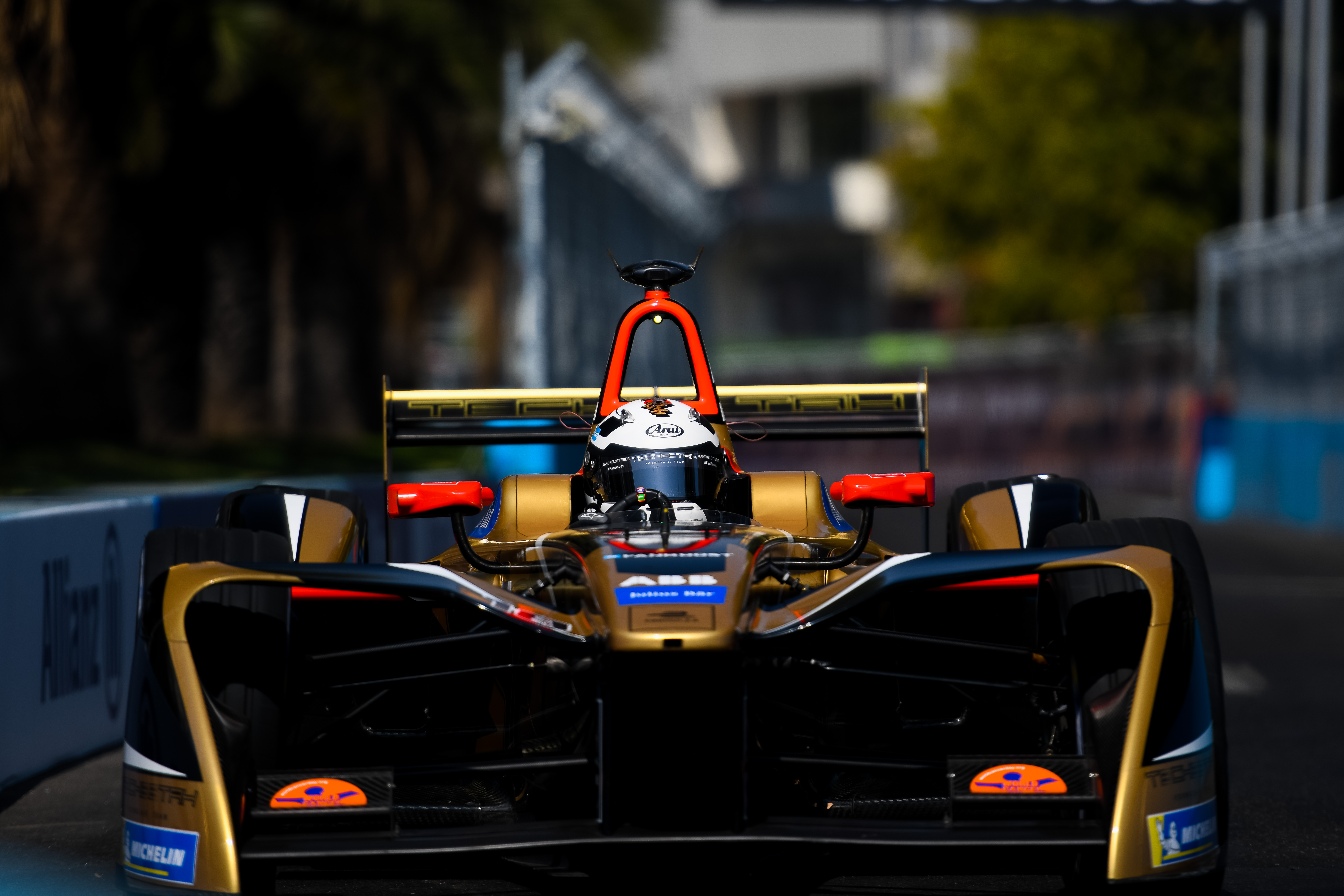 Battersea Park, June 2015. Andre Lotterer is in town, on the grid and being nosey after a weekend seeing friends in London.

On the grid he chats with some old media faces, this author included. He’s just stepped out of his Audi R18 e-tron quattro spaceship after finishing third at Le Mans. He looks around him and says what he sees.

“Let’s see about this whole thing [Formula E],” he told me.

“They aren’t quick and it seems to be a bit of a political thing and not really racing as we know and like it.”

Two years later, Audi is about to step into Formula E as a factory entity and Porsche is set to announce it is following suit. Lotterer is approached by Techeetah, then a growing team that had just scored a maiden win with Jean-Eric Vergne in Montreal and desperate for a decent team-mate after several failed flirtations in its maiden season. 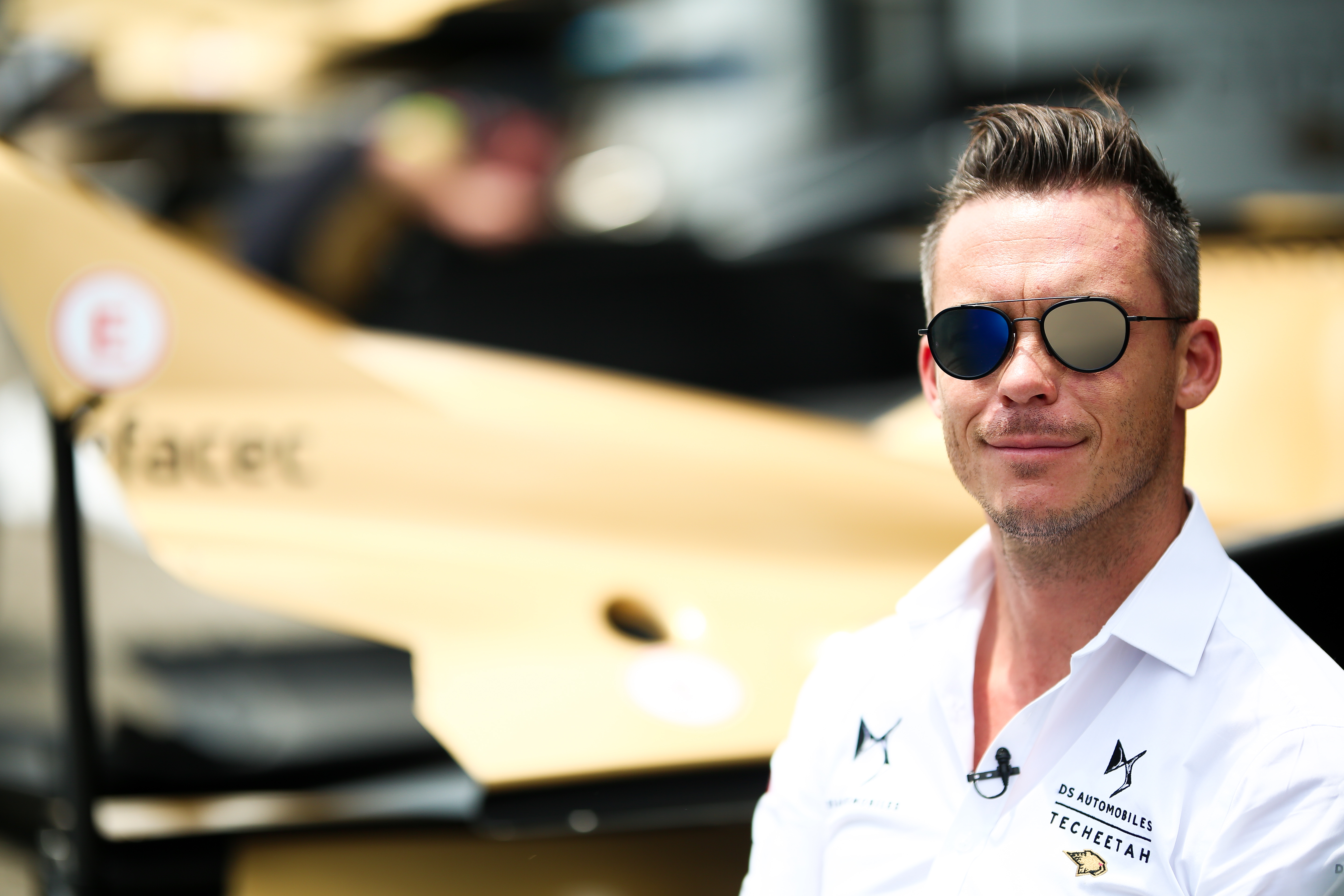 Lotterer, sensing the motorsport tide is turning, accepts an offer after learning from his Porsche paymasters that its World Endurance Championship programme is ceasing.

It was major surprise that he ended up in Formula E, but after a few races in which he looked genuinely lost, at Santiago in January 2018 it all clicked.

The rest is history, in the sense that an almost pre-ordained transfer to Porsche’s factory team came in the summer of 2019, and that Lotterer proved to be in the top bracket of Formula E performers, albeit still somehow without a breakthrough win. 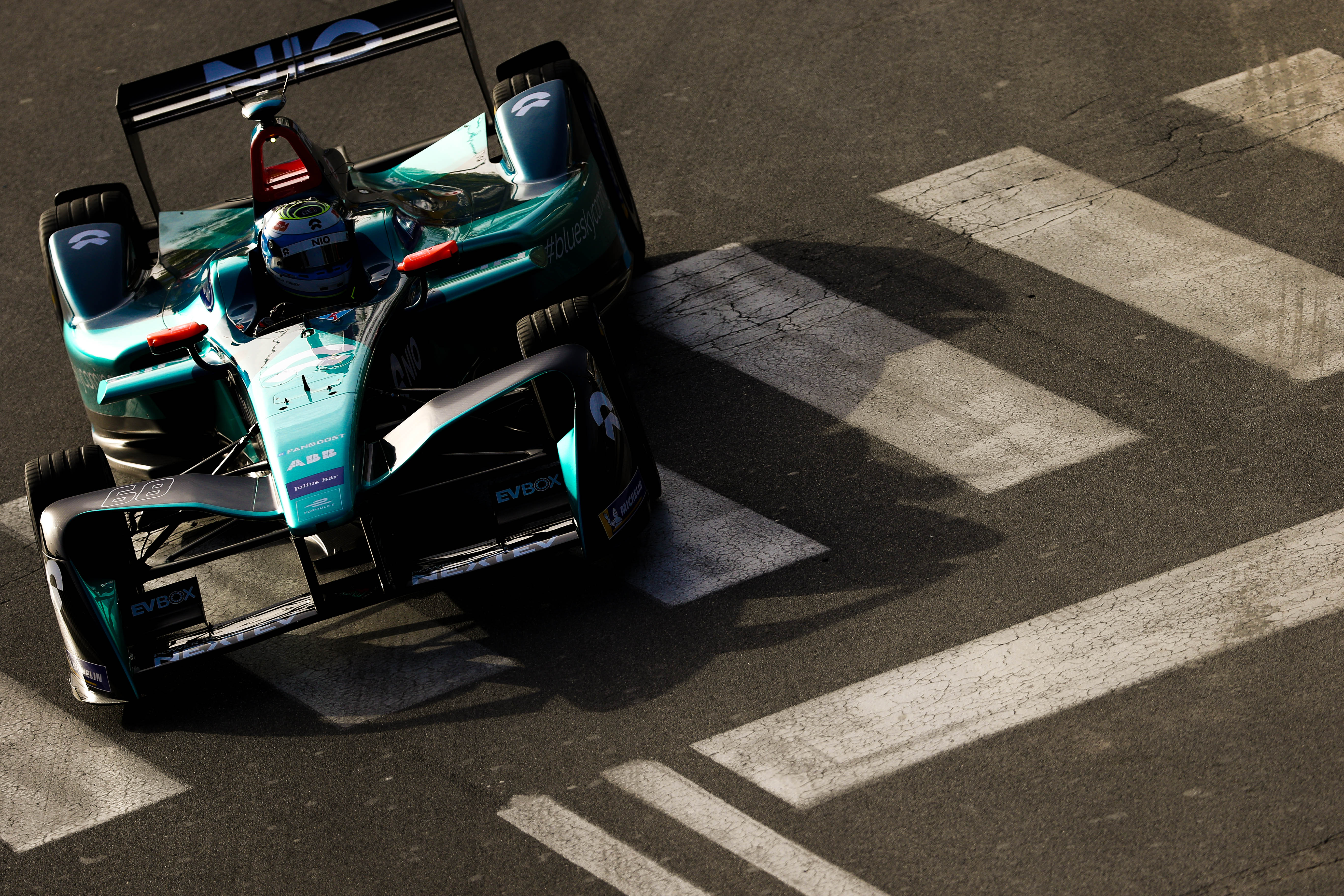 With the greatest of respect to Luca Filippi, a very potent GP2 and IndyCar proposition in his day, a tilt at Formula E wasn’t even in his own mind during the summer of 2017, let alone anyone else’s.

At that stage Filippi’s last programme of any significance had been a part 2016 IndyCar campaign with Dale Coyne Racing.

But when a call came from his old Rahal Letterman Lanigan IndyCar engineer Gerry Hughes, he decamped to the Calafat Circuit on the east cost of Spain for a few days and liked what he saw.

NIO, as it was then known, also tried out Nyck de Vries, Oliver Rowland and Loic Duval, but it was with great surprise that Filippi got the nod to be Oliver Turvey’s team-mate for the 2017/18 campaign, the last of the Gen1 era.

Filippi was by no means humiliated but being a team-mate to Turvey, and up against a grid which by the fourth season of the Gen1 car knew everything so intricately, meant that unlike Lotterer or fellow season-four rookie Edoardo Mortara, Filippi sadly sank without much trace. 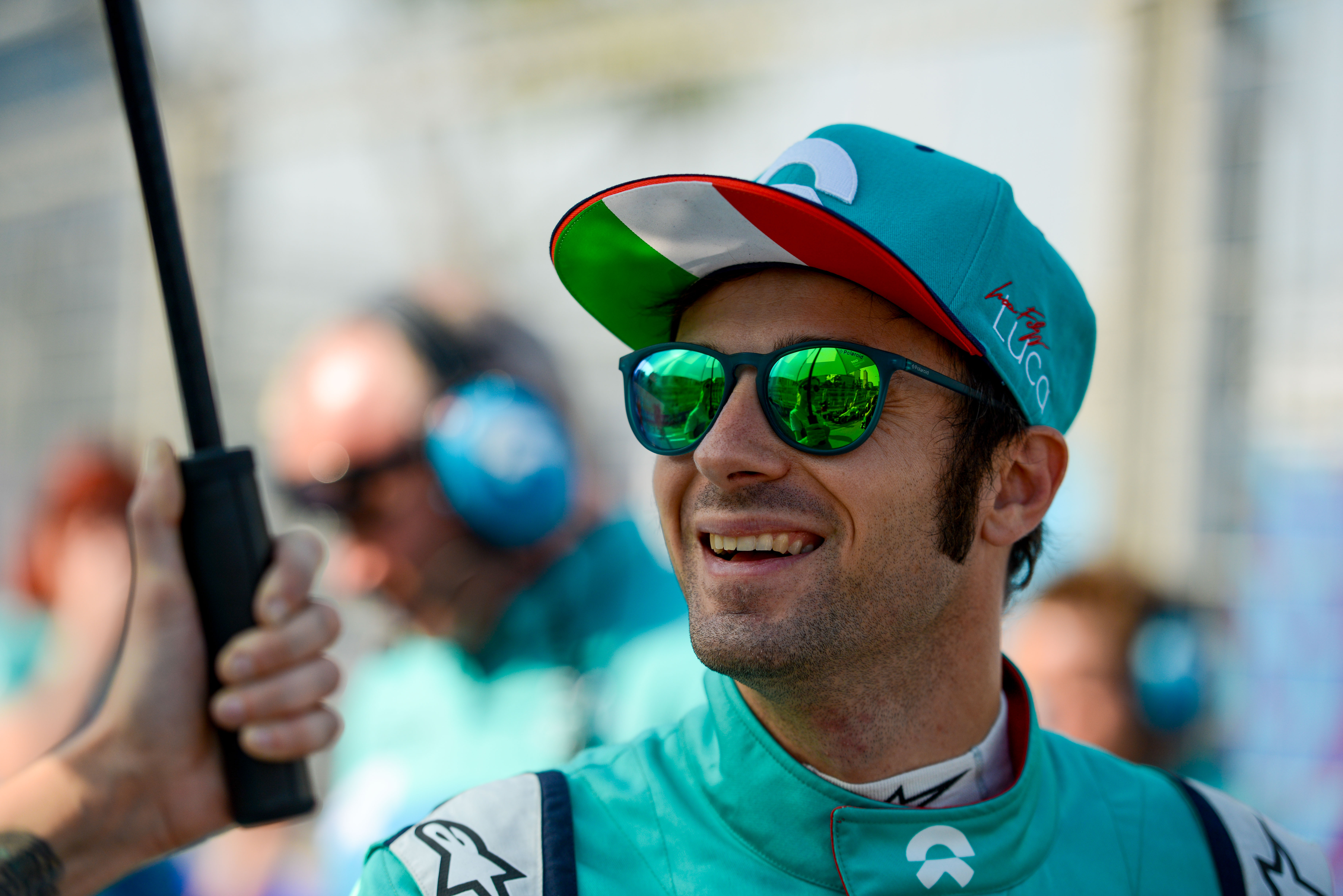 A fortunate debut point for 10th in Hong King was the only time he troubled the scorers while Turvey somehow netted a remarkable 46 points, including a brilliant second place at Mexico City.

This was by no means all Filippi’s own fault. Quite apart from the above odds being so stacked against him, the facts were that a bloated NIO team lacked anything approaching direction.

By mid-season Filippi had to go through the indignity of being replaced by Ma Qing Hua through PR necessity at the Paris E-Prix. 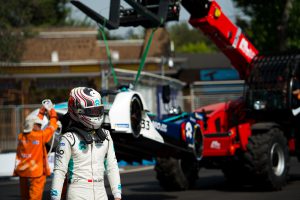 By the next round at Berlin Filippi was back in the cockpit but his confidence was irredeemably dented and he was simply an also-ran.

Rather cruelly Fillipi appeared to be given some indications that he could be retained for the first Gen2 season where his undeniable development skills could come into their own.

But with NIO’s fitful management and increasingly chaotic technical strategies he will now perhaps look back gratefully that he was not forced to play any further part in the team’s spectacular decline in the two following campaigns. 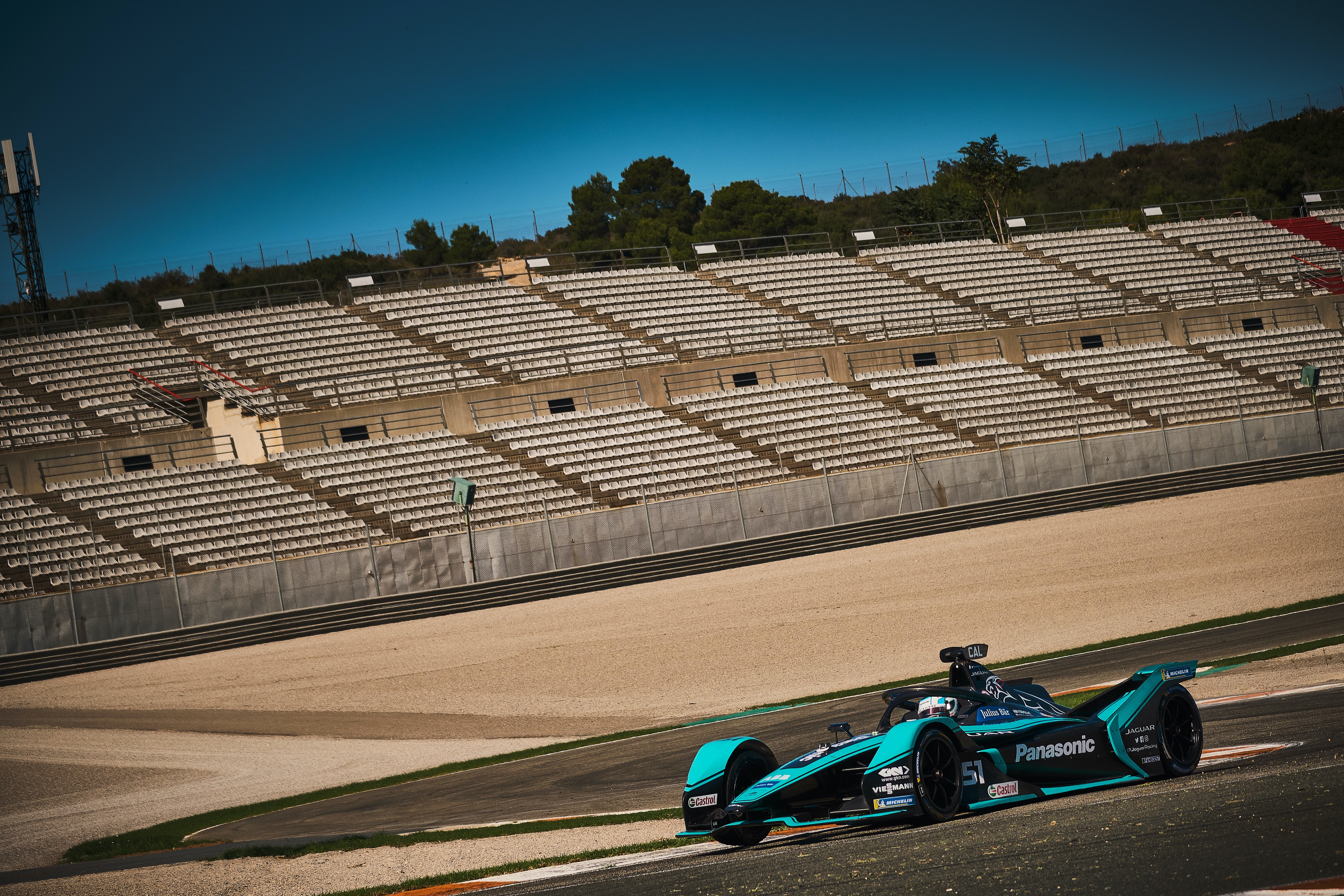 Then the reigning WEC GT champion, James Calado came onto the Formula E driver market in the early summer of 2019 when he completed a brief test for Jaguar at Abingdon airfield.

Jaguar was still adjusting to life from its split with Nelson Piquet Jr, which preceded the Big Cat’s first Formula E win at the Rome E-Prix just a few weeks before Calado sampled the car. 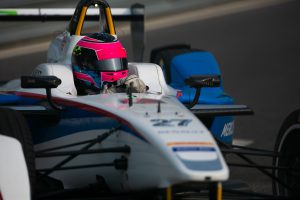 Piquet’s replacement Alex Lynn did a fine job in his seven races, scoring points and also getting into a position of probable victory in New York before a technical issue.

A strong presumption permeated over the summer that Lynn would continue but in August, around the time of the Silverstone WEC race, rumour swelled that it would be Calado that would get the place alongside Mitch Evans.

After a further test at Calafat in early September the whispers became louder and Calado was duly announced a few weeks later, rendering Lynn and his camp knocked for six. 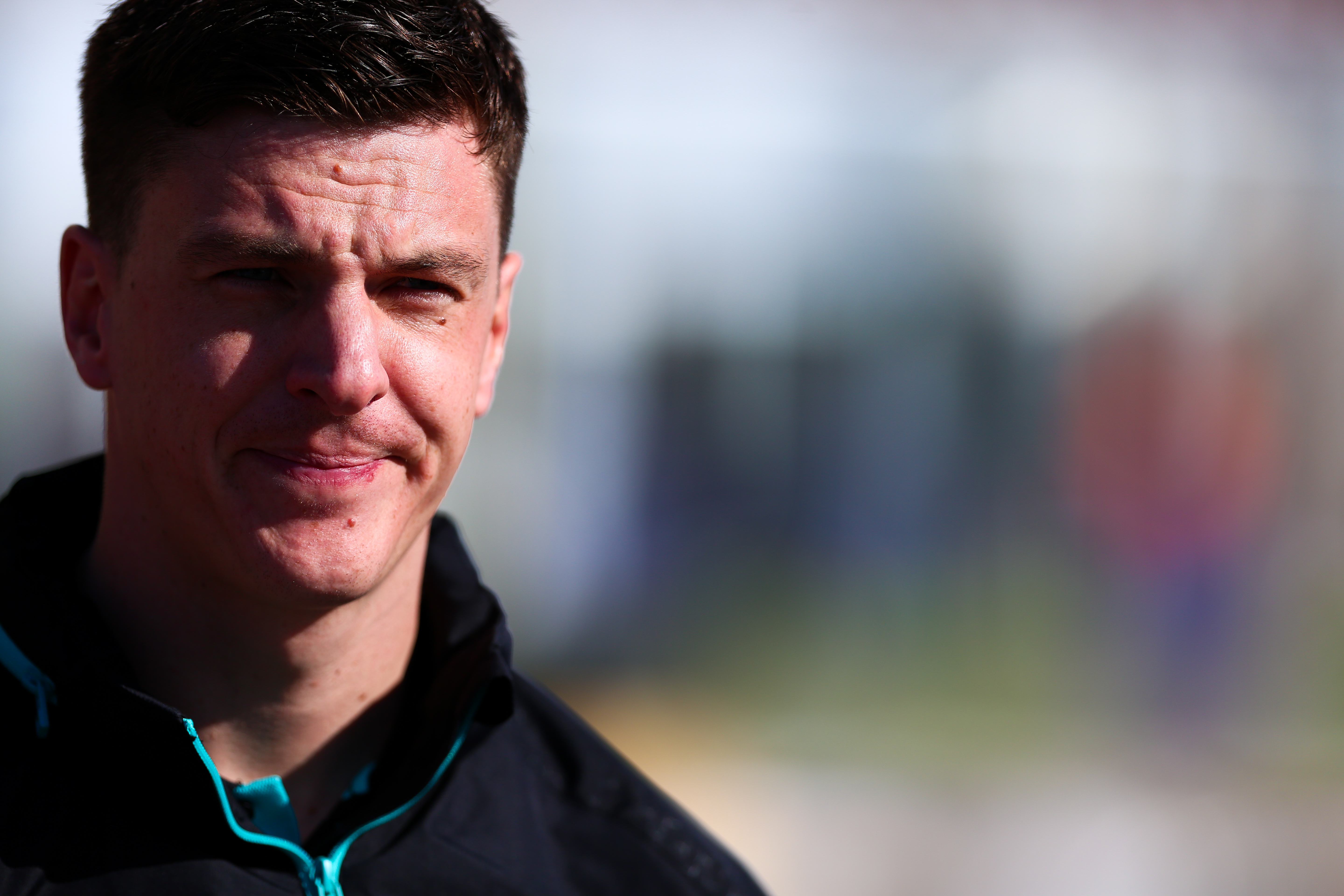 Jaguar stated that the decision was purely evaluation-based and the Nicolas Todt-managed Calado was simply taken for the flair he had shown in his tests.

In truth the move didn’t appear to make an awful lot of sense and appeared to go completely against Jaguar’s insistence on having two quick and Formula E-experienced drivers to ensure a maximisation of points across the garage. 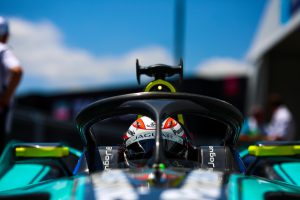 No one even considered denigrating Calado because those with an scintilla of sense knew he was an excellent and impressively-decorated professional racing driver.

But when you considered that he had not driven a single-seater for six years, nor had sizeable testing mileage behind him, then many questions prevailed.

Almost inevitably Calado struggled and for myriad reasons at that. Those reasons were spread across driver and team.

Little under a year since he was signed up, Calado’s brief Formula E career was over. Sadly, it goes down as one of the more curious episodes in the all-electric series’ history and how it all came to pass still poses more questions than answers. 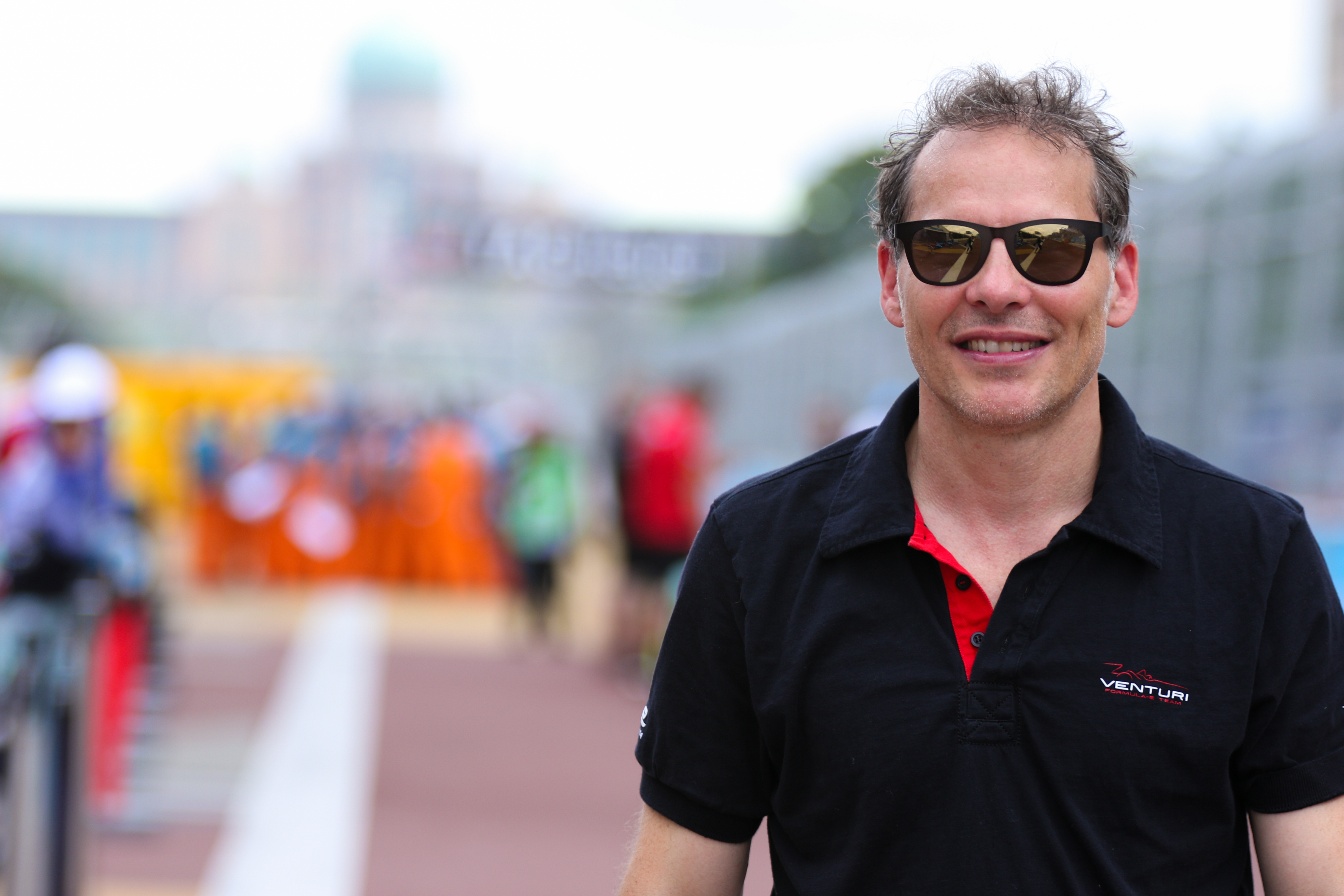