The curious case of Mercedes’ ‘arse-chiller’

On the team’s high profile debut in the all-electric championship perhaps this was not surprising. However, closer inspection revealed that much of the congregation was made up of FIA officials and their interest was plainly aroused.

The reason for that was a curious looking device protruding from de Vries’s car. Seemingly plugged into the rear crash structure was what looked like a small black basket that housed dry ice and a fan.

Was this merely a creative and cute bit of manufacturer thinking for cooling the powertrain pre-race or was there something more intriguing that was able to also somehow cool the RESS battery too?

The subject took on another dimension at last month’s Santiago E-Prix when a modified and a seemingly updated system was again attached to the Mercedes on the grid.

This time though, while de Vries readied for the race by towelling himself down at the side of the track, there was much animation as the 10-minute board was shown.

Suddenly there was mild panic in the ranks of mechanics and engineers.

An engineer shouted sharply at a mechanic to remove the cool tray from the right sidepod on the grid and the body language and gesticulations of that engineer seemed peculiar.

De Vries, who had seemingly snatched his first Formula E podium from a slowing Mitch Evans, was then instantly pushed back to fourth as a five-second penalty was applied.

This was news to many watching the race, indeed to de Vries too, but it was not to Mercedes-Benz EQ nor in fact Jaguar Racing -which had communicated to Evans that he need not be desperate in his defence.

The five second time penalty was handed out for not respecting the minimum coolant temperature, according to Article 7.5.2 of the FIA Supplier Battery Software Implementation Guide. This in itself breached Article 27.9 of 2019/2020 FIA Formula E Championship Sporting Regulations and it was a nailed-on penalty.

The minimum coolant temperature is five degrees centigrade, but crucially if the dew point is high the minimum would also be higher as it corresponds to the dew point.

To keep the dew point low, the RESS have desiccant bags in them (like the salt-shaker bags found in 1980s crisp packets!). These are changed at various times during the season.

The big question then was, could the device we had seen on the grid be responsible or even partly responsible for the penalty?

The answer is that it is highly unlikely it could have been, and indeed after the race, Mercedes-Benz EQ Formula E team principal Ian James was unequivocal in his certainty that it was not related. 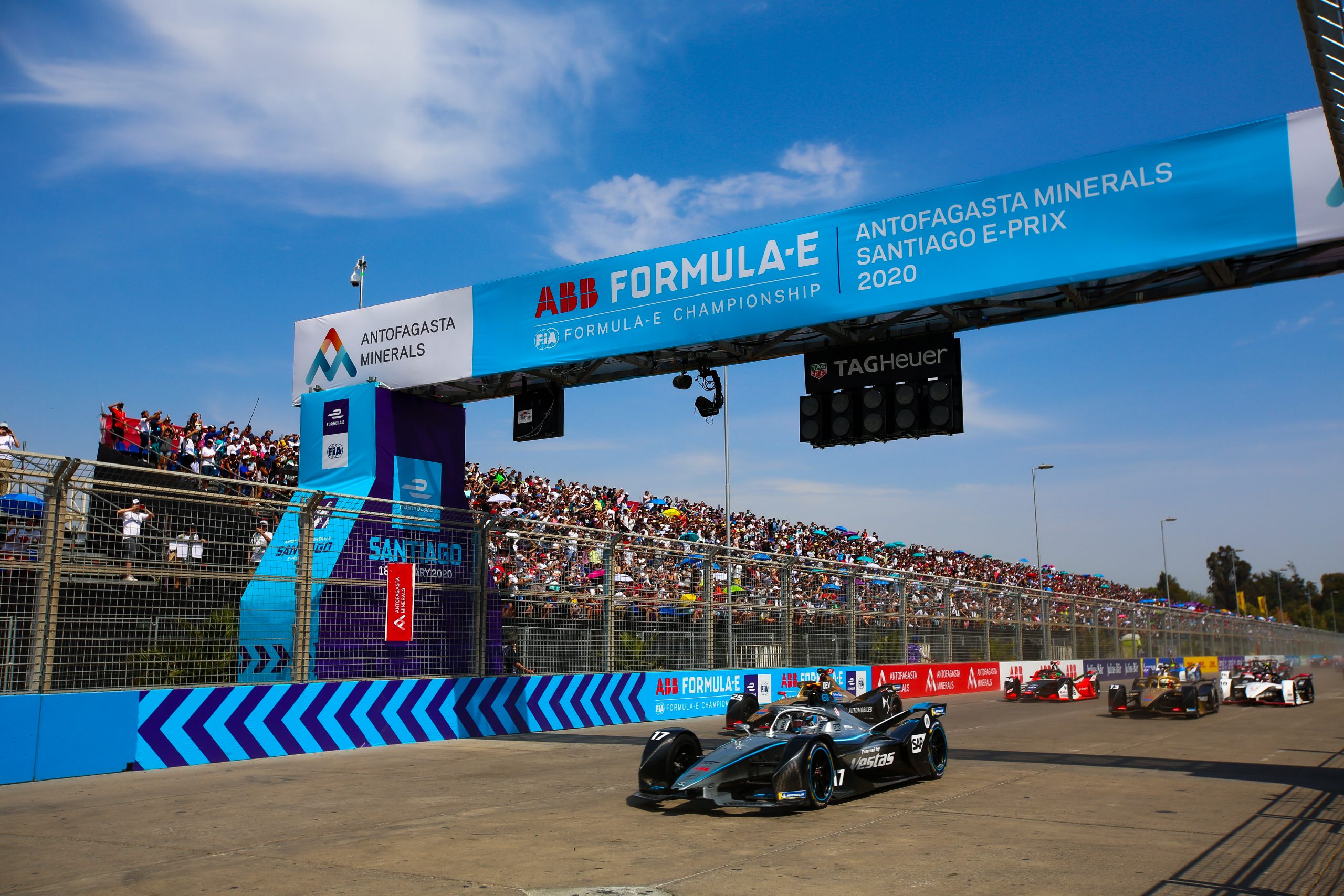 “No, that had nothing to do with it,” James told The Race. “There’s separate power cooling and gearbox cooling. Then you’ve obviously got the battery cooling on the side.”

It was according to James “an equipment failure of some kind, or a process failure. We need to do the analysis which meant that we didn’t adhere to that limit”.

But let us still take a look at the device, which is something that hasn’t been seen in Formula E before. Known colloquially in the paddock as ‘the arse chiller’ it is an assembly that consists of: a box for holding dry ice; A lid held on by x3 clips; An off the shelf leaf blower (the fan); Ducting that takes air from the fan through the dry ice and around the rear light and up inside the Rear Impact Structure (RIS).

The whole assembly has been 3D printed (from glass filled nylon or similar) in two or three parts and bonded together. It works by forcing very cold air around the rear light, along through inside the RIS.

The objective is to probably target the heat sensitive parts of the Mercedes electric motor. The internal coils and associated parts get very hot inside the motor and by their very nature they are hard to cool as they are embedded deep inside the unit.

Anything that can be done to lower the temperature of these critical parts will allow them to operate at full power for longer. 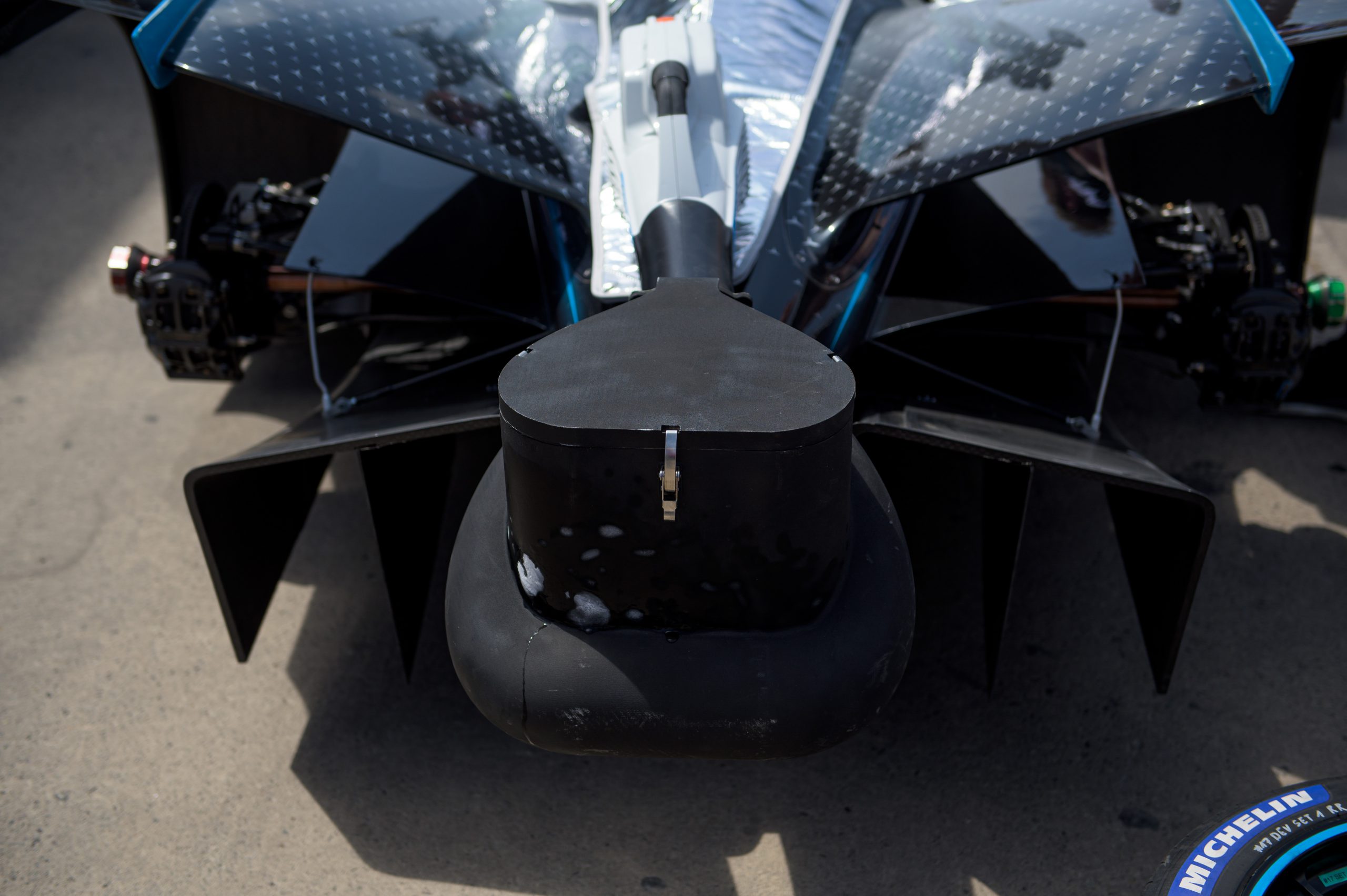 So how is it housed and fixed on the grid?

There are three spaces around the rear light that can be used to pass cold air to the powertrain.

If the air just generally blows up around the rear light it will fill the composite structure (CS) that houses the motor/gearbox with cold air and lower the temperature of the whole unit.

If the air is ducted within the RIS to exactly where it is needed the specific parts can be cooled very efficiently.

Should you pump in and fill the composite structure (CS) housing that surrounds the powertrain with cold air its temperature will drop.

Although a nice bit of kit from Mercedes, which has contracted a long held Daimler supplier to deliver it, the facts are that with the battery inside the monocoque structure, there is carbon fibre and a void between the dry ice and the battery. This means that an ingenious way of getting to the battery with the cool air is unlikely to occur. 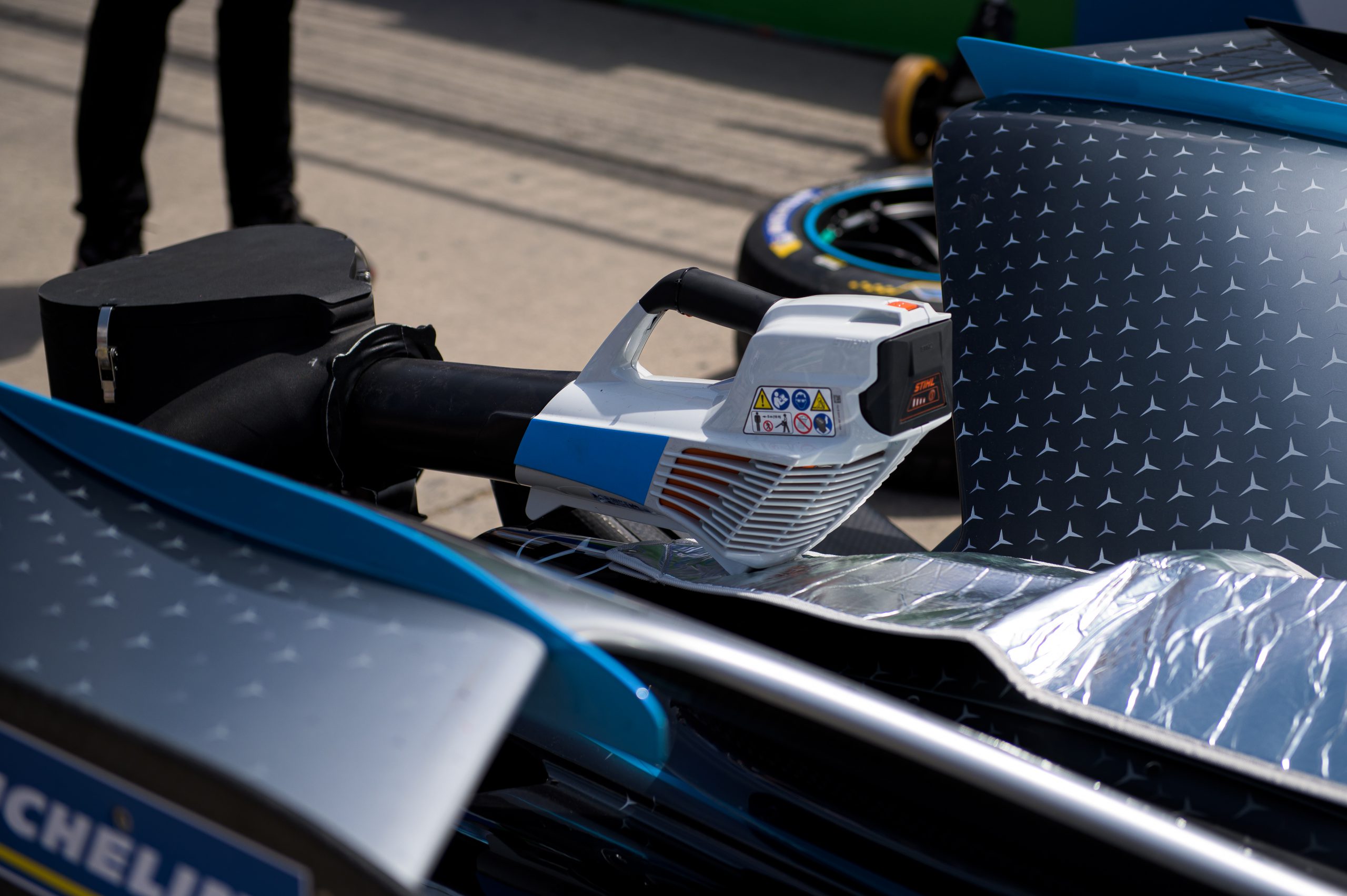 However, one true mystery is why the gearbox is getting chilled first.

Normally teams would want to actually warm that component given that oil is more viscous at low temperatures, and gears and bearings are normally specced for clearances at medium to high temperatures.

The chiller is an interesting solution from a manufacturer known for its ingenuity. But those casting aspirations that it was somehow related to de Vries’ penalty – and there were some immediately after Santiago – might want to cool down themselves for the time being. 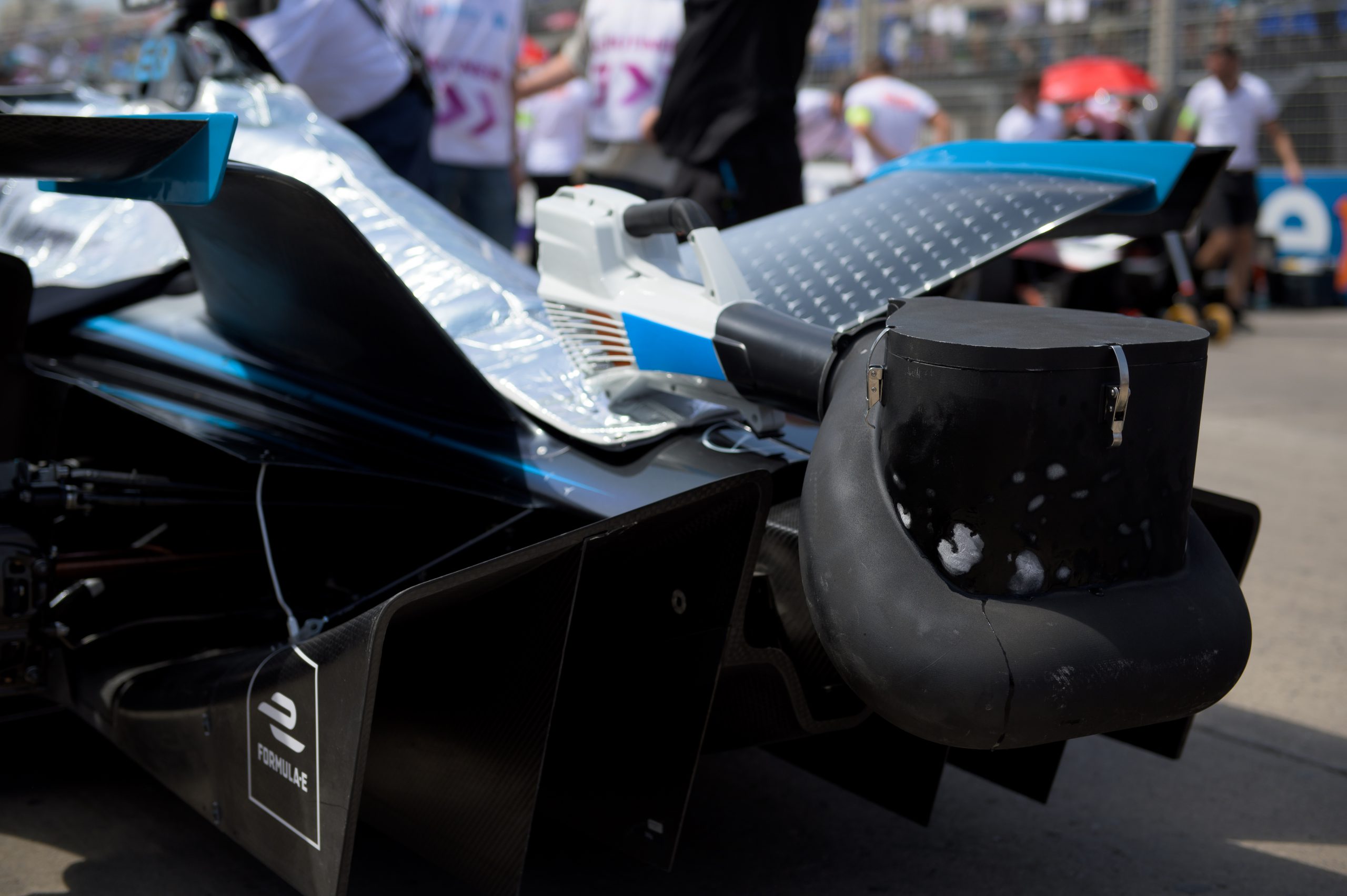