This month’s first London E-Prix at the ExCeL Arena will feature a much-modified circuit from what Formula E originally revealed over two years ago and an innovative bespoke indoor surface.

The track, which will have sections both inside and outside of the South Hall of the exhibition venue, has been slightly reduced from the original 1.52-mile design to a shorter 1.39-mile version with several reprofiled corners.

The fresh layout (shown at the bottom of the graphic below) was issued by the FIA Circuit Safety board on June 28 and will be the version that the 24 Formula E drivers will take to for the first shakedown session, which is to be held on Friday July 23.

The first sector of the track is unchanged from the original version issued in April 2019 – shown at the top of the graphic above.

However, the rest of the layout features a reversed hairpin in the mid-phase of the track and a different complex-type section at the northern tip of the circuit between the Custom House and Prince Regent public transport stops.

A second hairpin has been added to the final sector as the track heads back along the perimeter roads back towards the Connaught Bridge.

There then follows a tight left and right then a chicane at Turns 19 and 20 before the cars re-enter the ExCeL Arena.

The pitlane and starting grid will still be located in the original position inside the south wall of the arena.

Formula E event director for London Oli McCrudden (pictured above during a 2019 promotional event) told The Race that the changes had been made recently “working with the FIA, as we look at the speeds simulations on the racetrack”.

The previous area at the top of the track from Turns 9 through to 13 had to maximised for length and originally featured an ‘S-bend’ section.

McCrudden told The Race that this ‘S’ shape would have also been a tribute to his late father Stuart McCrudden, who ran the Thoroughbred Grand Prix series along with his son for many years and who also won the 1990 Willhire 24 Hours race in a long national racing career.

However, the approach to this section was deemed too fast so it has been modified into what McCrudden says is now more of “a fortuitous on-brand ‘e’ section of the track in the way it looks on the circuit map.”

“Then into the east car park of the venue and into that braking zone we wanted to create a nice sort of hard-braking overtaking location to get into T16 and also to get a little bit of a slower speed entry into some higher speed corners for safety reasons,” said McCrudden. 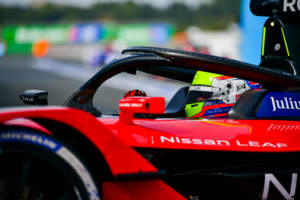 These changes have come working with the FIA, after analysis of the speed simulations on the racetrack with track builder Simon Gibbons, who has previously worked on A1GP tracks and was also the venue project manager for the 2012 London Olympics.

The indoor surface of the ExCeL Arena has been treated with a pioneering new substance to improve the grip and protect the flooring.

ExCeL’s floor is a pre-tensioned concrete slab and to alleviate the risk of damaging it Formula E consulted with architects and engineers.

“We basically found a system whereby we could take off about two millimetres of that floor, put down a substance which chemically bonded to that floor,” said McCrudden.

“We then broadcast emery across it, and then put a polymer coating over the top of that to create a friction surface that was suitable for racing.

“It’s a pioneering technology and it will give us the opportunity to race there.”

Build work on the track will begin this Saturday, July 10, with the event team starting to erect barriers and build the track.

Jaguar Racing driver Sam Bird will be one of seven British drivers racing on home ground for the first time in Formula E since July 2016 when the final Battersea Park races took place in the capital. 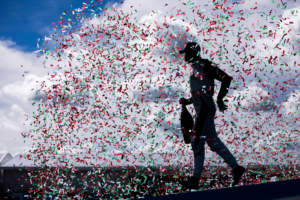 Bird thinks that the indoor surface will give the cars enhanced grip but that the challenge for the teams will be juggling that with the more abrasive surface outside of the ExCeL Arena.

“It’s going to be extremely difficult to replicate the grip level within the ExCeL because nobody knows what kind of grip it will give off,” Bird told The Race.

“With regards to the outside stuff, we’ll do a grip sweep and that’s probably what we’ll have to do as well inside.

“When we do the shakedown, we’ll be able to maybe merge the sectors together with different percentages. And say, ‘right, this sector is more 95% grip, this is 100%, this one’s at 80%’ etc.

“That’s the way it will have to work.”

The races at ExCeL Arena later this month will only be attended by a small selection of invited key workers rather than any tickets going on general sale.

The Race understands that is because around 85% of the spectating areas being inside meant that special dispensations would have been needed from the Department of Culture Media and Sport.

“It’s not going to be possible for us to welcome the massed ranks of the British motorsport fans that we would so much have loved to have been there,” McCrudden told The Race.

The event management plan for the event would need to be submitted for sign-off with various permits from authorities and Public Health England for fans to attend inside the ExCeL Arena.

“We will have a limited number of fans; we have looked at the options of doing ballots for key workers in the external section,” McCrudden added. “But again, we’re kind of looking at what happens on the 19th of the month to see what we can do.”

The venue has got 1400 seats outside in the east car park section around Turn 16, but The Race understands that under social distancing guidelines just 462 can spectate in those areas.

“We’re going to focus on making sure that it’s a great show for TV, a great spectacle and pray that next year we can bring everyone back and celebrate it all again and all together,” concluded McCrudden.