Another E-Prix in the United States is being actively pursued by Formula E as it looks to expand its calendar to as many as 16 locations in 2023.

San Francisco, Los Angeles, Houston and Atlanta are all known to be possible venues for another race in the United States to add to Long Beach, Miami and New York, which have been used for E-Prixs since the inaugural season in 2014/15.

The moves come on the eve of Formula E’s fourth visit to the country for the New York E-Prix races, which will use the track located in the Red Hook district of the city close to Brooklyn.

Formula E has two teams with American links as the Dragon Penske Autosport operation is entered under the Stars and Stripes through its owner Jay Penske, and the BMW i Andretti team is owned by Michael Andretti although registered in the UK.

The Race can reveal that Houston in Texas is believed to be the most likely venue for a second U.S race as the city ramps up its sustainability push. 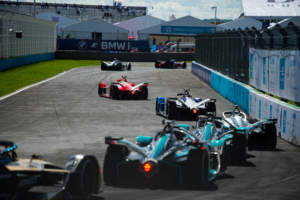 In April of last year, the city launched the Houston Climate Action Plan to reduce greenhouse gas emissions and to meet the Paris Agreement goal of carbon neutrality by 2050.

The city hosted a CART race between 1998 and 2001 in the downtown area, adjacent to the George R. Brown Convention Center.

A new circuit at the Reliant Park area was utilised in both 2006 and 2007 when Sebastien Bourdais was victorious for Newman Haas, while a heavily modified track was used by IndyCar in 2013 and 2014 for double-header races.

The final event was memorable for being the only IndyCar win for Colombian racer Carlos Huertas in a Dale Coyne entry (below).

While the all-electric world championship would not comment on individual races that might become part of future calendars, Formula E co-founder and deputy CEO, Alberto Longo, told The Race that “being in the U.S is very desirable and important for us and we want a second event”.

“The market there is picking up and I see a lot of interest coming from not only the west coast, but some other states in the US also,” said Longo.

“Options exist and we’re talking to people at the moment but they are at very early stages.

“We are actively talking with more than five cities in the US and some of the prospects are pretty exciting.”

The 2021-22 Formula E calendar is set to be confirmed this Thursday after the FIA World Motorsport Council has sat in Monaco.