Double DTM champion Rene Rast will partner Lucas di Grassi at Audi for all six races that will conclude the remainder of the 2019-20 Formula E season in August, replacing Daniel Abt.

Rast will get his first experience of the Gen2 Formula E car in the first week of July as Audi has booked out the Lausitzring for testing.

The Race first reported the likelihood of Rast taking the seat vacated by Abt after he was dismissed from the team for the bizarre esports imposter incident last month. 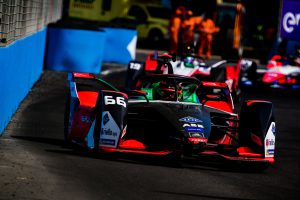 Rast will travel direct from the opening Spa-Francorchamps DTM round to Berlin where he will compete in all three of the double-header rounds before then immediately switching back to DTM mode for the Lausitzring event on August 14-15.

“I’ve been following Formula E very closely for a long time and am now looking forward to this new challenge,” said Rast.

“The demands on the drivers in Formula E are high: In addition to pure speed, it’s also a question of efficiency, battery management and the perfect strategy – and all of this on tight city circuits, where things are usually quite turbulent.

“But with the testing at the beginning of July and my Audi experience in the simulator, I’ll will try to be as well prepared as possible when I arrive in Berlin.”

Rast is the favourite to partner di Grassi, who is recently believed to have agreed a new deal at Audi, for the 2020-21 season, which will begin this December in Saudi Arabia.

Audi will complete its final DTM race at Hockenheim in November. In addition to Rast, three of the manufacturer’s DTM drivers have Formula E experience with Robin Frijns and Nico Muller competing for Envision Virgin Racing and Dragon respectively this season, while Loic Duval raced for Dragon for most of the first three seasons.

“As a two-time DTM champion and long-time Audi driver, Rene was naturally on the shortlist from the very beginning,” said head of Audi Motorsport Dieter Gass.

“It’s nice that there are no overlaps between DTM and Formula E so that Rene can compete in both series for us. With six final races in Berlin, our team still has everything to play for in the championship.”

Rast’s only previous start in Formula E came at the 2016 Berlin E-Prix at the shortlived Alexanderplatz street track.

He deputised for a Antonio Felix da Costa in a one off appearance for Team Aguri when da Costa had a DTM clash.

After impressing in qualifying Rast was not classified in the race having suffered damage when hit by Mahindra’s Bruno Senna.