A chicane that has been used on the main straight at Valencia in Formula E testing in recent years will not be part of the track configuration for the 2020/21 pre-season running later this month.

The Race has learned that Formula E Operations Ltd, which as promoter will run the test, has in consultation with the FIA decided not to use the right-left-right chicane.

The chicane – which has taken various forms in the three years that Valencia has hosted Formula E testing so far – has been used to simulate some of the tighter corners on traditional FE tracks and make Valencia more relevant preparation for the street circuits that comprise the calendar.

“It really was the only corner which gave us a bit more of a Formula E focus for set-up and driving” :: Alexander Sims

It is believed that some Formula E team principals had requested for the chicane to be removed due to concerns about accident damage before their race cars are packed and freighted to go to the Santiago double-header opener in January.

This was backed up by FEO, which also now has a cost reduction from not erecting the chicane for the test.

The Formula E cars and equipment are currently scheduled to leave for Chile by air freight shortly after the Valencia test is completed. 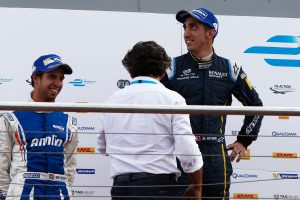 On its debut, two chicanes were trialled on the main straight – one just after the pit-in area and a second one close to the pit-out position.

The second one was added after some drivers complained that the entry speed to the initial single chicane set-up was too high.

Ironically a year later when speeds were higher after the introduction of the Gen2 car, the configuration reverted to the original single chicane design.

This was located a little further down the main straight and was the scene of several accidents.

In October 2019 for the third visit to the track the configuration remained unchanged but there were more accidents than the previous year. Among them was a tub damaging shunt for Neel Jani’s Porsche.

Just prior to that test, Formula E set up an informal group of drivers to advise on the make-up of circuits.

“The new version with a very quick Turn 1 doesn’t suit a Formula E car too much. Despite that, it will be exciting” :: Maximilian Guenther

The group’s work resulted in some changes, notably a new section at Mexico City.

The advisory group is set to continue this season, with the recently retired d’Ambrosio being replaced by an active driver.

The removal of the Valencia chicane is slightly divisive among the drivers.

Some still feel that without it, they’re investing in three days of testing on a track that has little baring on the circuits raced on in the championship itself.

“I understand that there was a fair bit of damage there last year but it really was the only corner which was different to the others and therefore gave us a bit more of a Formula E focus for set-up and driving,” Mahindra’s Alexander Sims told The Race.

“The rest of the track is so high speed for FE that it’s of limited relevance.

“I totally understand the difficulties of finding the perfect venue but having some slow corners would have been nice.”

BMW i Andretti driver Maximilian Guenther is looking forward to running the quicker version of the track but did acknowledge the loss of relevance for Formula E races.

“The old chicane has been quite tight and led to some incidents and red flags last year,” he told The Race.

“It was maybe a bit too extreme, but nevertheless good to create some low speed on this track.

“The new version with a very quick Turn 1 doesn’t suit a Formula E car too much.

“Despite that, I look forward to pushing my car to the limit in the new Turn 1. It will be exciting.”

The Race understands that Formula E and the FIA is expected to run some form of track limits procedure for some aspects of the test.