The Venturi Formula E team has been given a rare test day ahead of the traditional pre-season group test at Valencia later this month.

Both Edoardo Mortara and new signing Norman Nato are at the Llucmajor track on the island of Mallorca alongside their powertrain provider Mercedes, which has Nyck de Vries on hand at the venue.

The two teams are sharing track time with the new 2021/22 powertrain that Mercedes recently completed homologation on.

The move to give customer teams track time is significant as it was recently assumed that a reduction in allotted manufacturer test days from 22 to 19 this season would make a sub-allocation to customers unlikely.

Both Venturi and Mercedes are spending several days at the Mallorca venue to continue development on the new technical package which will include mileage given over to both Nato and Mortara ahead of the three days they will take part in at Valencia.

Venturi is in a supporting role at the test, which is also the first event its new deputy team principal Jerome d’Ambrosio is attending in his role.

The Belgian announced last week that he has hung up his helmet to take on the management position, in which he will work closely with team principal and stakeholder Susie Wolff. 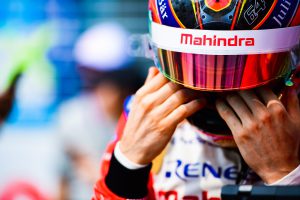 “From my point of view it is really coming here and getting to know the guys, looking at how we operate, learning, looking, observing,” d’Ambrosio told The Race from Mallorca.

“It’s a new role and I think that the most important thing I have to do at the moment is observe, look and learn, to get to know the people and see how we interact as a team because I’m fresh out of the car.”

D’Ambrosio also stated that he would not be tempted back in to the cockpit even in emergency conditions.

Several drivers have had to step in to last minute roles at Formula E races before, including Oliver Rowland being a last minute replacement for an injured Nick Heidfeld at Punta del Este in 2015, and Ma Qing Hua deputising for Oliver Turvey at the New York E-Prix in 2018 after the British driver injured his hand in a practice accident.

“I’m a very pragmatic person and when I say retire, I retire,” said d’Ambrosio.

“I’m moving on and I’m actually very excited by this new challenge and by moving to a different part, and a role in the team.

“I want to bring my knowledge and experience of getting those results but in a different capacity now.”

The only other team to hold customer status in Formula E, Envision Virgin Racing, also recently completed private testing with Nick Cassidy as part of Audi’s allocation of test days.

Envision Virgin managing director Sylvain Filippi wouldn’t comment directly on the test – which took place at Magione in Italy last week – but did tell The Race that the two-way development work with Audi is continuing positively.

“We try to help them as much as we can and that’s what’s nice with this collaboration,” he said.

“We are there to help them and if we help them it helps us, so it is a good position to be in.”