Alex Lynn has tasted disappointment on several occasions in Formula E. But he never got used to it.

Instead, a kind of hard-bitten racing instinct told him that winning contentment would override the hard slog in this one of the sport’s toughest disciplines to lick.

Maybe the success would be at some far-off humid track like Sanya, or the curious old/new world feel of Riyadh perhaps.

Or just maybe it could come on the banks of the River Thames, a stone’s throw from Romford, the town of his birth almost 28 years ago. It actually didn’t really matter, just as long as it came.

Considering he entered last weekend having not led a single lap of a Formula E race the omens were not particularly strong but as a committed ‘Gunner’ (that’s a fan of Arsenal football club for those not of a footballing disposition) he showed a Dennis Bergkamp-esque touch and feel for his Mahindra M7ELECTRO in and out of the ExCeL Arena.

It was a win that left Lynn’s side of the Mahindra garage highly emotional – particularly his engineer Cyril Blais, a sturdy, blunt and technically gifted Frenchman.

“Cyril was in tears over the radio, which is a very nice thing to hear,” Lynn told The Race.

“Honestly, it was a moment you dream of, you’ve been fantasising about after all those long days in the simulator and testing at cold airfields.

“You dream that one day it might come our way and it did today.”

With the hard work track testing done and the simulator hours ticking over Lynn has earned his home moment in the spotlight. But he and the Mahindra team also earned it overnight after a strong yet ultimately slightly disappointing Saturday race where they took third after starting the pole.

The Race chronicled in detail why that occurred but on Sunday the vehicle dynamics of his car were at least in part, improved.

“We did make changes and the car was definitely better but really I think the safety cars helped a far bit,” said Lynn.

“Because it’s always thermal degradation which is the issue because the tyres get really hot. 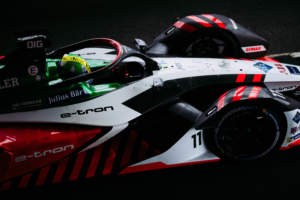 “If you don’t have an intervention, like a full course yellow or a safety car, it is really hard and today it played out nicely.

“I think with this championship it has to fall your way a little bit and when you get the chance you have to grab it.

Yet it wasn’t the cheek and guile of Audi and Lucas di Grassi that worried Lynn but more the pace and boldness of Nyck de Vries and Mercedes EQ.

He knew it from the very first few laps when de Vries sent an aggressive one down the inside into the Turn 10 hairpin.

.@nyckdevries is not hanging about. He passes @alexlynnracing for P3 ⚡️

“I knew he was going to come in aggressive,” details Lynn.

“He was going to come early because he was so motivated to win.

“I knew that off the start and I was super happy because I saw that [Oliver] Rowland [ahead] didn’t look that quick to me.

“He [de Vries] is very fast and I just thought ‘ok, you go and create some carnage and I’ll be here’.

“In this championship you have to know when and be able to pick your battles and that wasn’t the time.”

.@alexlynnracing makes the move on @nyckdevries putting him in P2!

Lynn’s Formula E career overall has been unique in that he has never had more than a single season with a team.

In 2017/18, his inaugural campaign with the DS Virgin team, he started brightly but then stuttered in the second half and he was ultimately replaced by Robin Frijns.

When he replaced the departed Nelson Piquet Jr at Jaguar in April 2019 he reeled off some strong races, notably at Bern and New York City.

While the latter saw a tilt at victory quashed by a technical issue, the earlier race in Bern was the more remarkable but for very different and personal reasons not reported at the time.

Just hours before the start of the race he had been informed of the death of his mother.

Remarkably, Lynn raced and finished a strong seventh. It had the few people who were aware of this news completely overwhelmed in respect and admiration for his professional conduct in such circumstances.

So when it comes to hurdles and challenges, Alex Lynn is a bit like that last pin in a bowling alley, the one you can never knock down.

Some say he can come across as slightly aloof. That’s something that this writer has never personally seen or felt.

What we have here is just a super focused and talented driver, who is also intelligent and ambitious to simply succeed in what he sees as his job of making wins come to life.

That’s a trait he may again need to deploy again this summer when Oliver Rowland moves into the Mahindra team.

“You know, I’m not sure what I’m going to do next year,” says Lynn.

“I’ve got some nice things on the table and I want to be in a top team and to fight for moments like this every weekend.

“That’s all I can ever ask for as a racing driver. Anything else doesn’t really matter.

“Winning is what you want over any other thing because that’s what we started our careers, dreaming about.

“So that’s where I want to be and where that will be in the future I’m not sure.”