Edoardo Mortara topped the final day of Formula E’s pre-season in Valencia, as the ominously strong pace of the Mercedes-powered cars continued.

On the third and final day, Mortara topped the mammoth six-hour test session with a 1m25.763s, the fastest time set of the three-day test at the Circuit Ricardo Tormo. 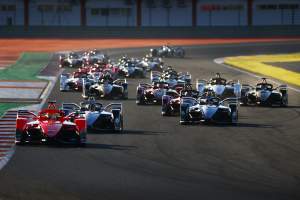 He edged DS Techeetah’s Jean-Eric Vergne by 0.041s, while the factory Mercedes EQ of Stoffel Vandoorne was third and also within a tenth of Mortara’s benchmark.

Defending series champion Nyck de Vries was able to make it three Mercedes-powered cars in the top six ahead of the Audi-powered Envision duo of Nick Cassidy and day one pacesetter Robin Frijns.

Andretti’s Oliver Askew was the only one of the three rookies taking part in the session with Antonio Giovinazzi (Dragon-Penske) and Dan Ticktum (NIO 333) arriving in Saudi Arabia for their respective Formula 1 and Formula 2 weekends.

Askew survived a red flag-inducing spin in the morning, and would go on to set the 17th-fastest time.

🔴 "The final day of Valencia Formula E testing has just begun but a red flag has flown early, with Avalanche Andretti new boy Oliver Askew beached after a spin."#FormulaE pic.twitter.com/xBcUOYIC2O

Ex-Jaguar Formula E driver Adam Carroll deputised for the absent Ticktum at NIO 333, but was slowest and 1.3s off the pace of his team-mate Oliver Turvey.

Dragon elected not to replace Giovinazzi, while his team-mate Sergio Sette Camara stopped on track before recovering to go 19th-quickest.