Formula E has launched its own esports series to be held over the coming nine weeks – the ABB FIA Formula E Race at Home Challenge.

The all-electric championship follows other motorsport categories such as F1, IndyCar, MotoGP and NASCAR in setting up virtual events for its pro drivers. 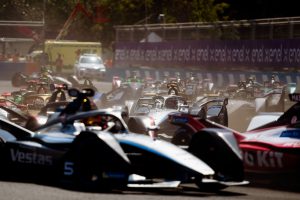 The new ‘Race at Home Challenge’, which will be run on rFactor 2, will be used to draw attention to UNICEF’s work in safeguarding children during the coronavirus crisis. Formula E announced earlier this week a formal tie-up with UNICEF.

Under the event format drivers in last place will be incrementally taken out of the race until there are 10 laps remaining, after which there will be a sprint to the chequered flag with the remaining runners.

The Race understands that not all of the regular Formula E race drivers will compete, but those confirmed at present include Daniel Abt, Jerome d’Ambrosio, Nico Muller, Lucas di Grassi, Felipe Massa, Mitch Evans and da Costa.

Nick Cassidy will join Robin Frijns in the Envision Virgin Racing squad for the first event this Saturday and is likely to do several others thereafter. The reigning Super Formula champion tested for the team at the Marrakesh rookie test last month and is known to be keen on a future drive in the category.

In addition to the Formula E driver grid, a concurrent simracer grid will also race. Among the drivers confirmed is sometime endurance racer Charlie Martin.

Formula E is also planning to show the events on existing Formula E broadcasting platforms – Eurosport and Fox Sports. Formula E CEO Jamie Reigle confirmed at a virtual press conference held this afternoon that the initiative is aiming to not clash with existing established events.

“We are trying to make sure we have a slot that is dedicated to Formula E,” he said.

“A couple of others start right after, so some of the guys will be doing a quick change but we are trying to have our own window and be respectful of other initiatives out there.”