The team had not looked a likely frontrunner going into the season-opener, but strong runs through the early stages of qualifying got di Grassi into contention and then errors by the Andretti drivers in the crucial duels handed di Grassi pole.

Andretti Porsche team-mates Jake Dennis and Andre Lotterer had been quickest in their respective qualifying groups. Lotterer then beat highly impressive Nissan rookie Sacha Fenestraz in his quarter-final and Dennis dismissed the works Porsche of Pascal Wehrlein despite smacking a bollard in the stadium section and smashing off a significant part of his front wing. 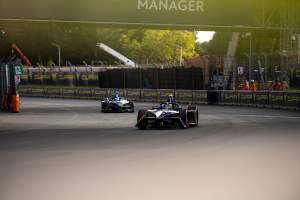 Dennis wasn’t allowed to change it so carried the damage through a close semi-final against Jake Hughes – flying on McLaren’s Formula E debut – in which Hughes’ slides through the final corner made the difference in Dennis’s favour.

It was Lotterer’s turn to make an error in his semi, braking too late into the Turn 5 hairpin and losing enough time to give di Grassi an easy run to the final. Di Grassi had earlier defeated old nemesis Sebastien Buemi’s Envision Jaguar in their quarter-final.

Dennis was still the favourite going into the final given Andretti’s pace all day, but a pair of lock-ups in the first few corners gave di Grassi a comfortable margin.

Hughes starts a superb third for McLaren’s first FE race, 12 places ahead of team-mate Rene Rast and with Lotterer alongside him on row two.

Dan Ticktum starred with fifth for NIO 333, having reached the duels before losing out to Hughes in their quarter-final. 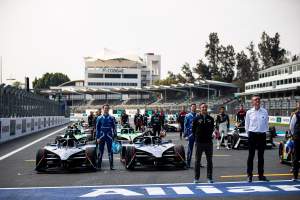 The combination of teams still unfamiliar with the new cars and in particular the optimum single-lap performance window for the new Hankook tyres, plus traffic issues, meant a host of surprise exits in the group stages.

The DS package used by DS Penske and Maserati MSG had looked the strongest after pre-season testing but all four cars running it fell at the first hurdle. DS team-mate Jean-Eric Vergne and reigning champion Stoffel Vandoorne were 11th and 14th, the Maseratis of Edoardo Mortara and Maximilian Guenther only 16th and 17th.

Less surprising – given the team’s fraught practice – was that no works Jaguars made it to the duels. Mitch Evans got close and starts 10th but Sam Bird is on the back row along with polesitter di Grassi’s Mahindra team-mate Oliver Rowland.