Carroll back in Formula E fold with NIO333 role

Former Jaguar Formula E driver Adam Carroll has been signed by the NIO333 team as reserve driver ahead of the first world championship season, which begins two weeks tomorrow in Saudi Arabia.

The ex-BAR-Honda Formula 1 test driver will act as cover for NIO333 race drivers Oliver Turvey and Tom Blomqvist this season but is ineligible to run at the Valencia rookie test in April because of his race activity in 2016/17 with Jaguar.

On one hand Carroll’s appointment is something of a surprise after being away from Formula E for almost four years.

But his capability as a relatively strong plug-in and play alternative if needed makes a whole load of sense.

His single campaign with Jaguar in 2016/17 was somewhat harshly judged as not good enough to warrant a second season, given the team admitted it only really started to show what it could muster after that first season – which had essentially amounted to operational testing.

That was because it committed relatively late to Formula E in the late autumn of 2015 when Jarno Trulli’s eponymous team imploded and freed up a slot on the grid.

It meant that Carroll and his team-mate Mitch Evans struggled for genuine race pace over the course of Jaguar’s first season, and with Carroll coming off slightly second best to Evans in both qualifying and points hauls he became surplus to requirements.

He had a ring-side seat as Piquet Sports team manger when Carroll was often battling with Costa’s driver Nelson Piquet Jr in Formula 3 and GP2.

Still just 38 years of age, a year younger than Porsche driver Andre Lotterer, Carroll is unlikely to get a genuine second crack at racing in Formula E.

Yet a strong depth of experience and his thorough work ethic is likely to give NIO333 more impetus to at least join the congested midfield bunch.

It need to as its points drought now extends all the way back to the New York City E-Prix in July 2019.

Carroll has previously come close to a race deal with the previous incarnation of the team, which was known simply as NIO until September 2019.

He tested several times for the team in 2017 when it evaluated several drivers including Nyck de Vries, Loic Duval, Oliver Rowland and the driver who was eventually chosen for a seat, Luca Filippi.

Since being replaced at Jaguar by his former F3 and GP2 sparring partner Nelson Piquet Jr in the summer of 2017, Carroll has mainly competed in GT racing. 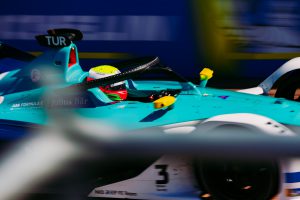 He recently inked a deal with the Greystone Racing team to campaign a McLaren 570S GT4s in the 2021 GT Cup series.

“Formula E is a fascinating championship to work in; it is extremely high level and technically complex,” said Carroll.

“It has been interesting to see how the cars and systems have developed since I raced with the series in 2017 and the NIO333 team is pushing very hard for the coming season. I look forward to the challenge ahead.”

Carroll is spending some of this week in NIO333’s simulator before travelling to Riyadh next week.

Turvey completed a final test run in the team’s development test car at Abingdon airfield yesterday, while Blomqvist will travel direct to Riyadh from his Asian Le Mans Series duties with the Jota team this weekend.

The Diriyah races will make the debut for NIO333’s newly homologated car, dubbed the NIO333-001 in deference to being the first design under the Lisheng Company ownership which now holds a majority share.

“Not only is Adam a very talented racing driver, but he is also a good friend of the team,” said Silk.

“The role of reserve driver is obviously very important to us and I am very grateful that we have such a safe pair of hands in this key position.

“I am sure I speak for the whole team when I say we are looking forward to working with Adam again.”