Wolff and Horner must share some blame for F1 finale mess

Formula 1 race director Michael Masi isn’t the only person whose actions should be under scrutiny following the controversial end to the 2021 championship battle in the Abu Dhabi Grand Prix.

Yes, the way the restart was handled was messy. It was confusing for lapped cars to initially be told they would not be allowed to overtake the safety car, only to then be told they could.

And it’s understandable that people have raised eyebrows at the fact only cars in between Lewis Hamilton and Max Verstappen were then moved out of the queue, and the process that was followed for the safety car to come in soon enough to give us one more lap of racing seemed a little more rushed than the F1 sporting regulations suggest should be the case. Although that last point depends slightly on your interpretation of using one or two regulations to overrule another.

Once you filter through the noise (and there’s a lot of it), one theme that sticks out is that Masi should have made clearer decisions and made them sooner.

Might he have been able to do just that if he’d not had two F1 team bosses in Toto Wolff and Christian Horner – to use Horner’s own description – “screaming” at him when he was trying to make the most high-pressured decision of the entire season?

At that stage of the race, and the championship battle, nothing Mercedes or Red Bull had to offer the race director was of any constructive use to him. Mercedes wanted to force a scenario where Hamilton was protected on his older tyres, and Red Bull wanted Verstappen to have a shot at him on fresh softs.

The levels of self-interest at play at that point made whatever they thought about the situation utterly worthless. 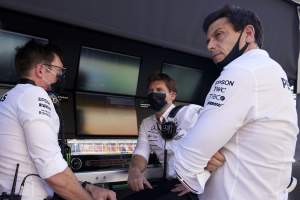 The race director should have been left alone to make what he felt was the right decision, hopefully based on a full understanding of what’s allowed within the F1 rulebook.

Whatever the outcome was at the end of the race, the team whose driver lost would be blaming it on Masi, while whoever won would be saying he made the right call. What was allowed in the rules would only interest the side that felt aggrieved.

If Masi had followed a path through the rulebook that either resulted in the race finishing behind the safety car, or lapped cars being left between Hamilton and Verstappen, Red Bull would be just as up in arms about the outcome as Mercedes is.

Ross Brawn is absolutely right to compare the behaviour of Horner and Wolff to football managers being allowed to run onto the field to argue with the referee when a key decision needs to be made.

They have no right at that point to try to influence the decision-making of the person in charge, and crucially in the case of the Abu Dhabi GP finish, to distract Masi and waste his time when he was under such huge pressure in the closing moments of a grand prix.

F1’s usual protocol is for the designated team manager to be the point of contact between the pitwall and race control. Brawn’s suggestion that F1 should stop the team bosses from contacting the race director wouldn’t necessarily solve the problem entirely, as the team managers would have been just as capable of screaming at Masi during that final safety car. 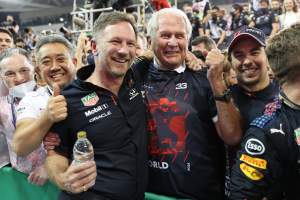 Marko: Mercedes made a mistake and must accept defeat
Read more

Football features a ‘fourth official’ on the touchline who has the unfortunate job (among more formal duties) of standing between the managers to be shouted at every time they are unhappy about something.

Perhaps F1 needs the same system? Effectively a human shield to allow the race director to get on with their job? That person could then pass on any relevant messages to Masi, which would probably be about 5% of what makes its way along the radio airwaves from the teams during sessions.

If you think Masi is the villain in all of this, remember he’s not the only one. Horner and Wolff cannot wash their hands of the role they both played in a brilliant F1 season ending under a cloud of controversy.