Formula 1’s second Portuguese Grand Prix of the century resulted in Lewis Hamilton’s 97th career victory, after a close fight in the early stages of the race with his main championship rival Max Verstappen.

Hamilton’s second win in three races allows him to extend his points lead over Verstappen, and with Valtteri Bottas completing the podium positions in third place and securing the fastest lap, Mercedes extends his advantage over Red Bull in the constructors’ championship.

There weren’t quite as many ‘winners’ from the race in comparison to the opening two rounds of the season, but more than a fair share of ‘losers’ from the third race of the 2021 F1 season.

As always, our writers sort the good from the bad. 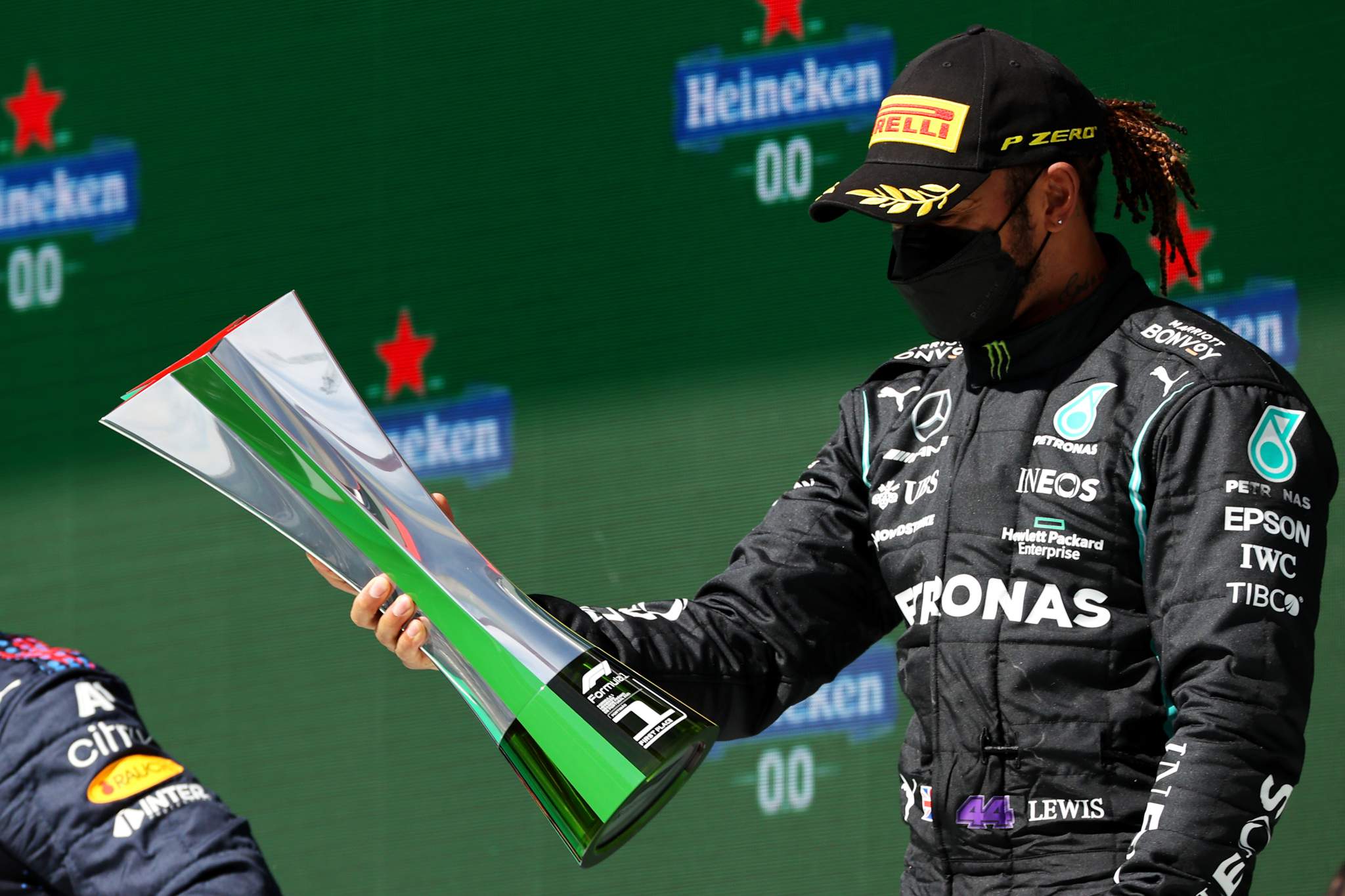 It’s a bit obvious to include the race winner, but the nature of Hamilton’s victory, in a year where we are on course for a very close title fight, makes this one very important.

Hamilton had work to do when he found himself jumped by Verstappen on the restart, and he yet again proved his skill and desire to fight back. When he re-passed the Red Bull he also firmly slammed the door in Verstappen’s face when he tried to retaliate, and then Hamilton hunted down his pole-sitting team-mate Valtteri Bottas to retake the lead.

From there – inevitable tyre complaints aside – he controlled the race as we are so used to seeing.

The McLaren driver continued his superb start to the season with his third consecutive ‘best-of-the-rest’ result of 2021 – and fourth including Abu Dhabi last year – in fifth place.

A good first lap, passing Esteban Ocon for sixth with a superb move, laid the foundations but he then overtook Carlos Sainz and then Sergio Perez on the restart lap to establish himself in the top five.

Although Perez inevitably repassed him, Norris never looked back and was 4.4s clear of Charles Leclerc at the chequered flag and within 12s of Perez. 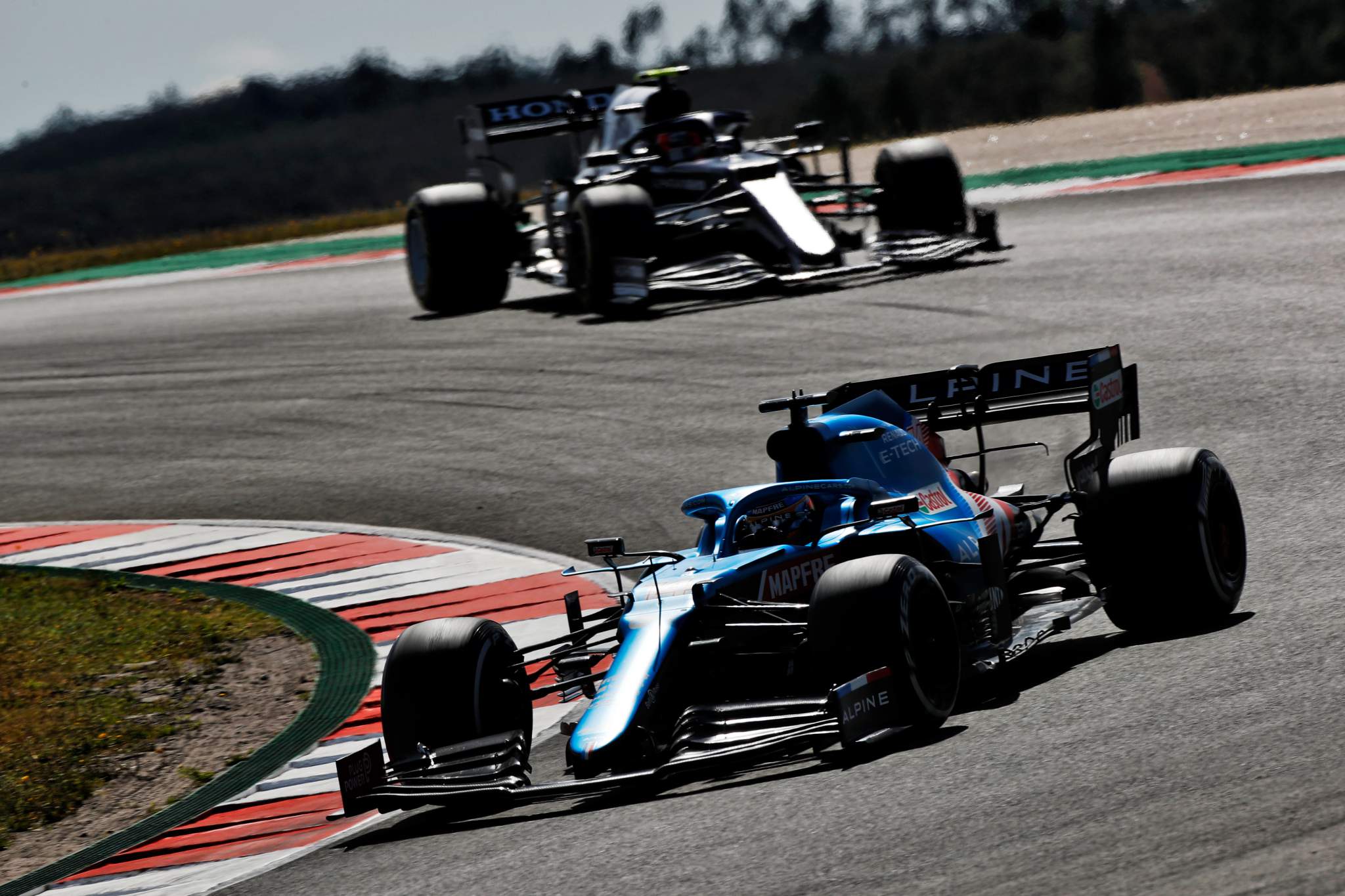 Points! And plenty of them. This haul’s nowhere near what Renault enjoyed at its peak last year but after two tough races as a rebranded team, Alpine will be very happy with this.

While it was a shame for Esteban Ocon to slip back from his P6 start, he never looked in danger of falling out of the points and a combination of the car’s inherent performance in Portugal and good management meant seventh was fully deserved.

More impressive, though, was Fernando Alonso. This was comfortably the best performance of his F1 comeback and much more like we’d expect from a swashbuckling driver.

He’d said after qualifying that the Alpine has come alive here and Alonso certainly made that seem like the case in the grand prix.

It was a classy drive that was rightly rewarded with a decent points finish in eighth place – his best since Singapore 2018. 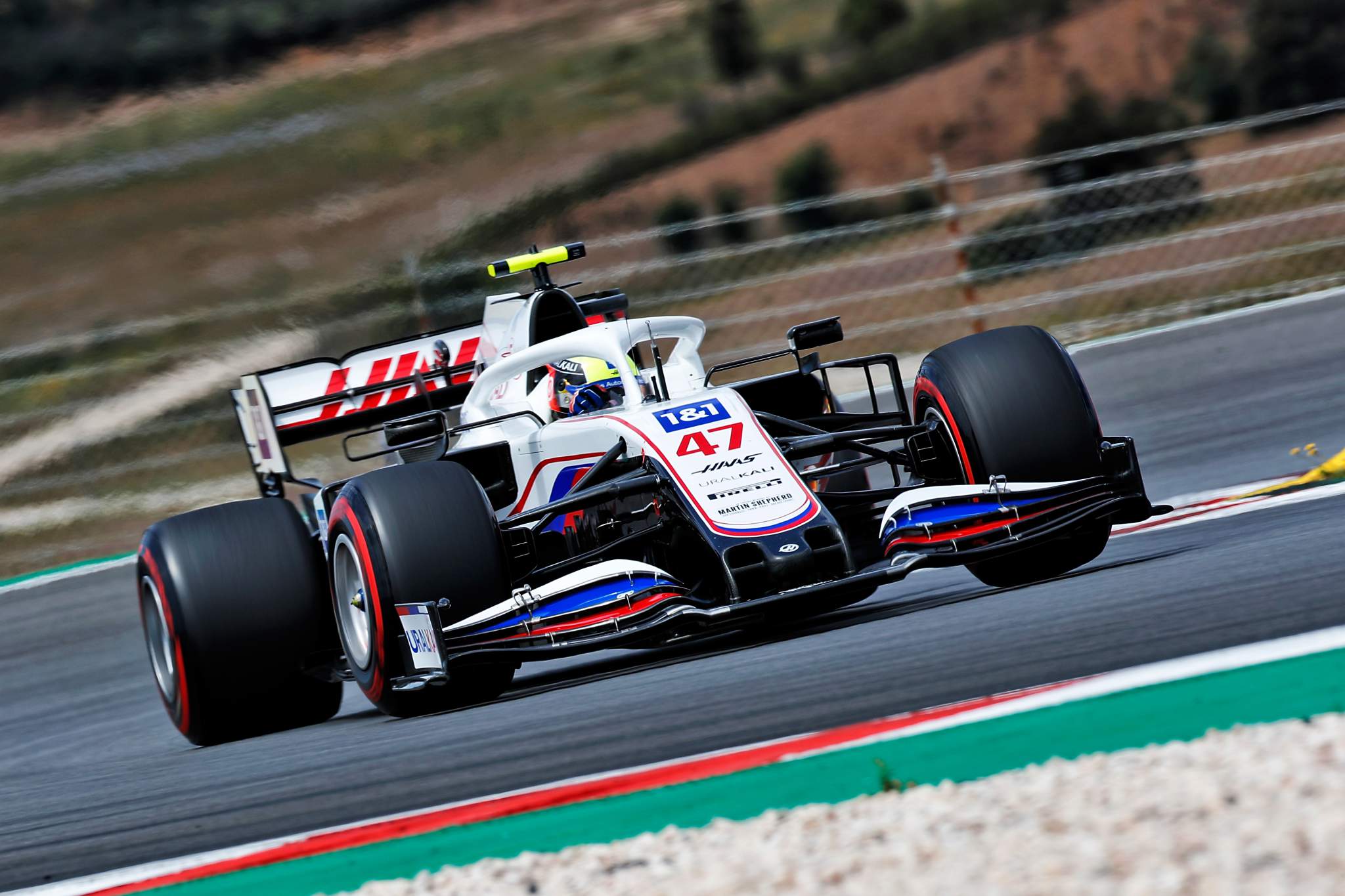 A 17th place finish might not sound like much to write home about, but he drove a fine race and picked off the Williams of Nicholas Latifi late on.

This is the first time Schumacher has had a clean race, having spun in Bahrain and crashed under the safety car at Imola, but he converted his clear pace superiority over team-mate Nikita Mazepin into a good result given the machinery. 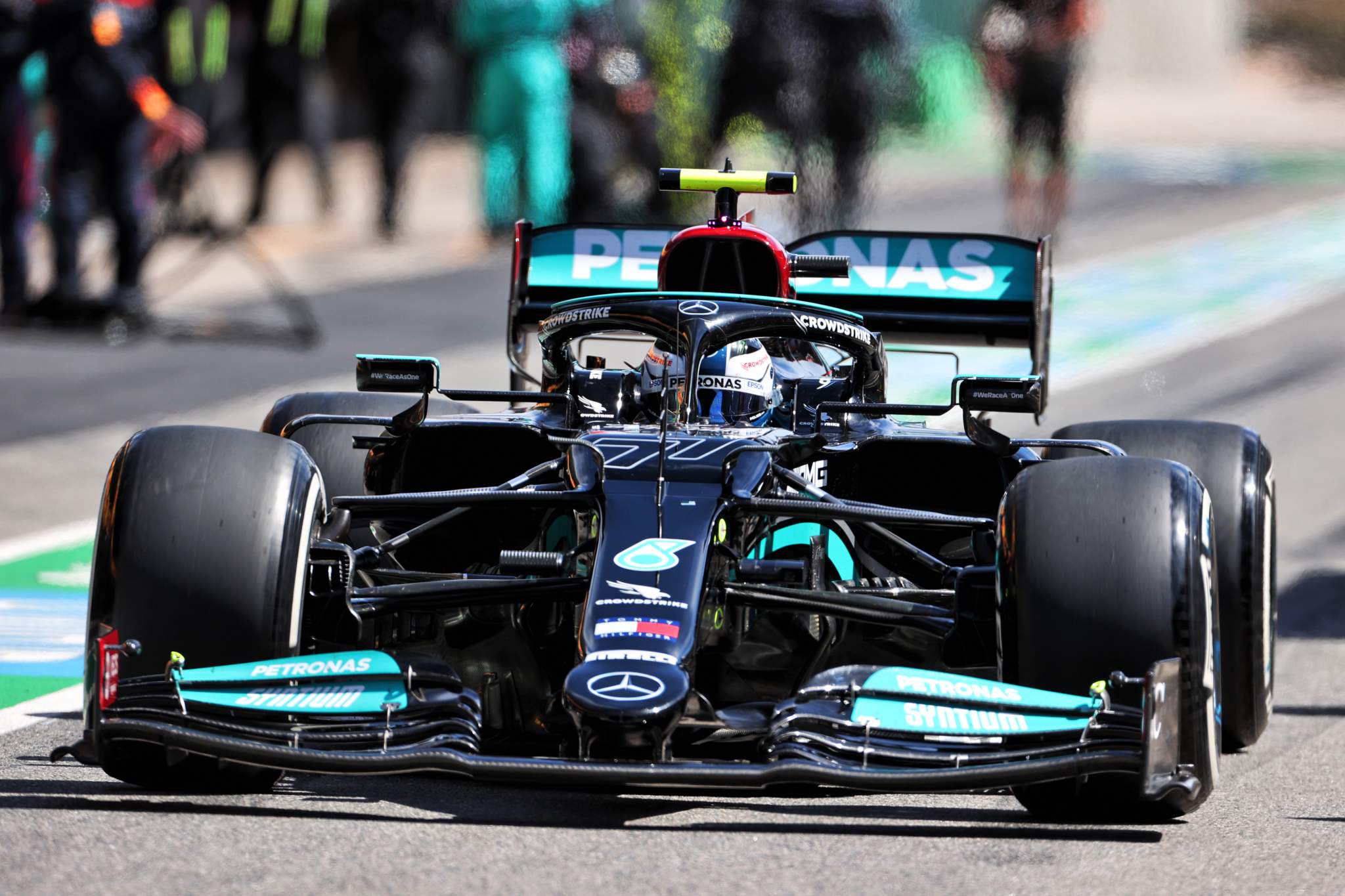 Even starting from pole position and leading at the start, Bottas still managed to have an underwhelming race to finish third.

“I don’t really know why in the first stint it didn’t work,” he said afterwards.

It was a very similar race for him to that of last year, just not being able to keep the tyres in as happy a place and being mugged by Hamilton and left behind.

The place loss to Verstappen came as he tried to defend the Red Bull’s undercut on the our-lap, a little wobble into T3 all it took for Max to pounce.

He’s racing against two of the all-time fastest guys and this is just what that looks like. No disgrace in it, but it’s got to be so hard to keep bouncing back from race after race. 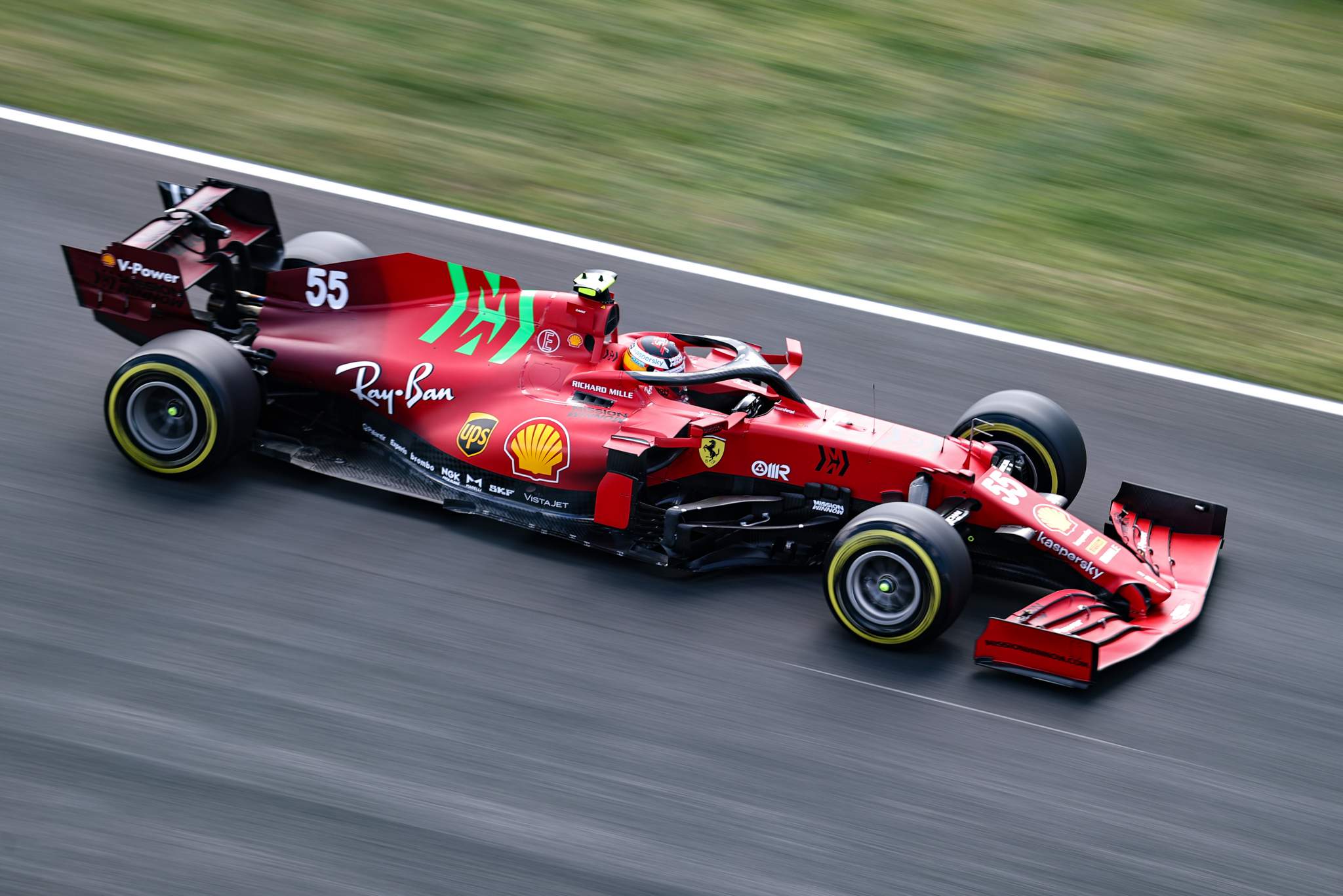 When Carlos Sainz Jr out-qualified Charles Leclerc – a regular Saturday overachiever for Ferrari – he wouldn’t have expected to spend the second half of the race plummeting down the field to end up outside of the points.

Yes, he was slightly compromised by having to use the soft tyres to get through Q2, meaning he started the race compromised compared to Leclerc who was able to start on mediums.

But the decision for Sainz to take mediums at his pitstop, rather than hards like everyone he was racing against would do when they came in, destroyed his race.

Leclerc said Ferrari had problems on the mediums which it didn’t understand, so presumably, the team had data from his first part of the race that the medium would be a bad tyre to take for Sainz later on. Whether that was the driver’s call or the pitwall’s – it left Sainz doomed. 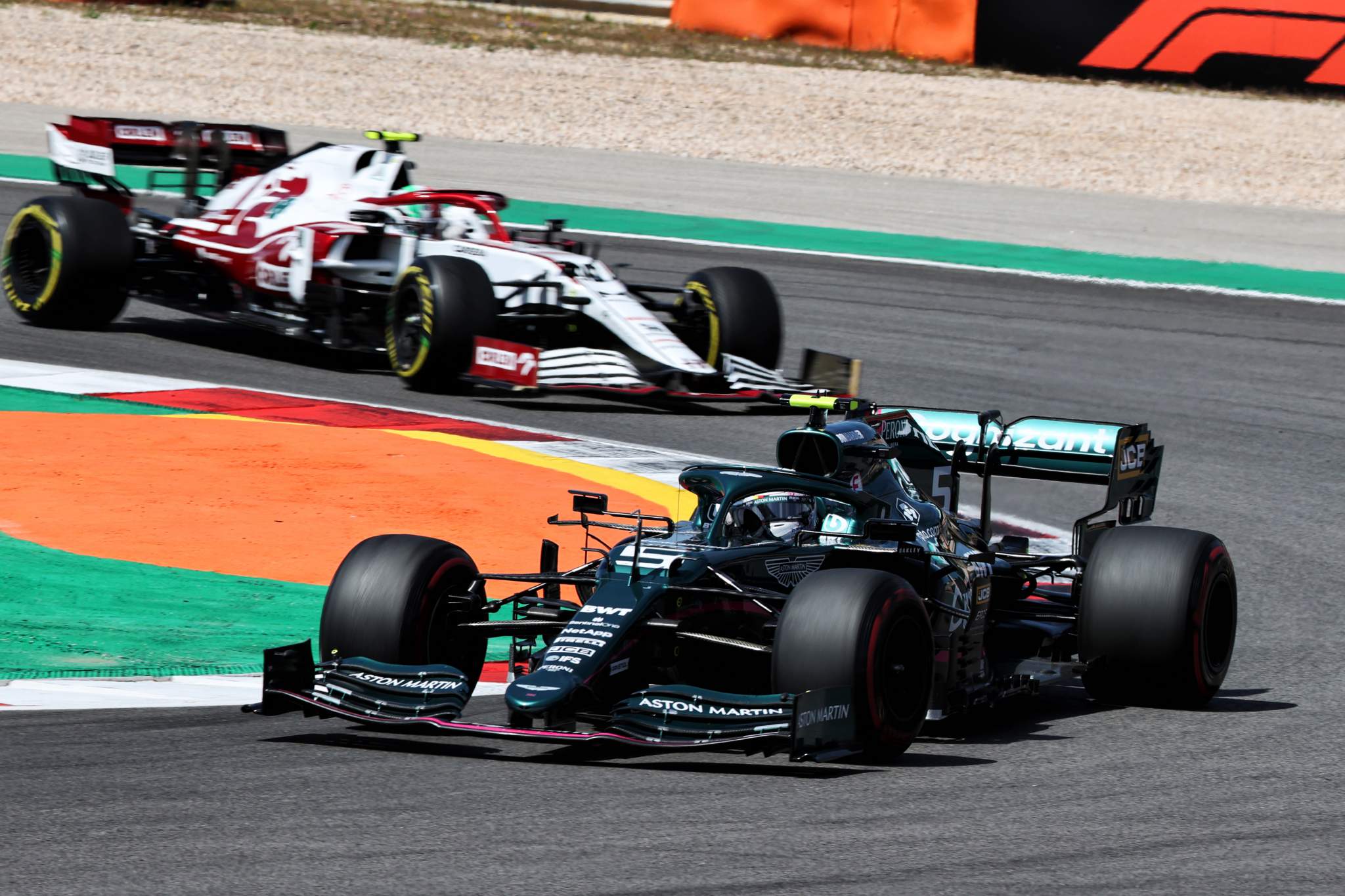 It hasn’t starred in the midfield at all in 2021 but has at least managed to get a car into the top 10 in qualifying every time, and in Portugal, it was Sebastian Vettel’s turn.

That raised hopes that Vettel would fight for his first points of the year but as soon as he fell out of the top 10 he never looked like a contender to get back in.

Lance Stroll made OK progress after his Q1 exit, aided by the team’s fast-tracked new floor, but a formation 13th-14th finish – both drivers a lap down – is well below this team’s grand expectations. 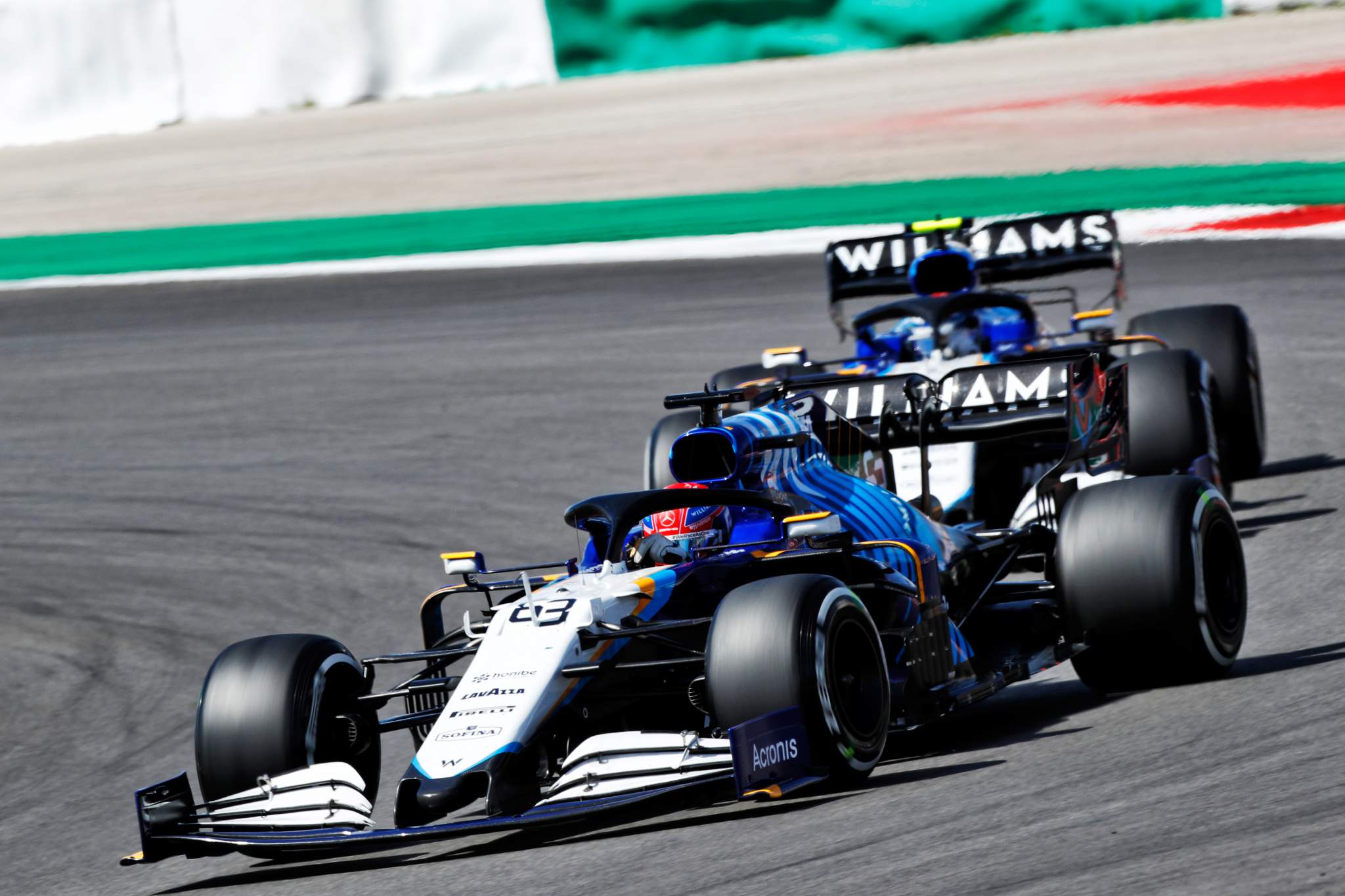 This was a chastening grand prix for Williams, which had gone into Sunday hoping to snipe for its first points finish since 2019.

Russell’s race was damaged in one miserable lap after the safety car restart. He tried to sneak inside Vettel at Turn 3 and got left on the outside him through Turn 4.

Russell went off track and ran side by side all the way down to the hairpin at Turn 5 but was rebuffed, and then made the wrong choice opting for the outside of Vettel into Turn 8. That was his first mistake as he got a little wide on the exit and lost a place to Ricciardo, then came what looked like an even costlier one as he had a huge lock-up defending the inside into Turn 1.

He fell behind Giovinazzi, Alonso and Stroll in quick succession and just slipped back from there, presumably battling with that flat spot.

Nicholas Latifi losing out to a Haas late on just compounded a race to forget for Williams. 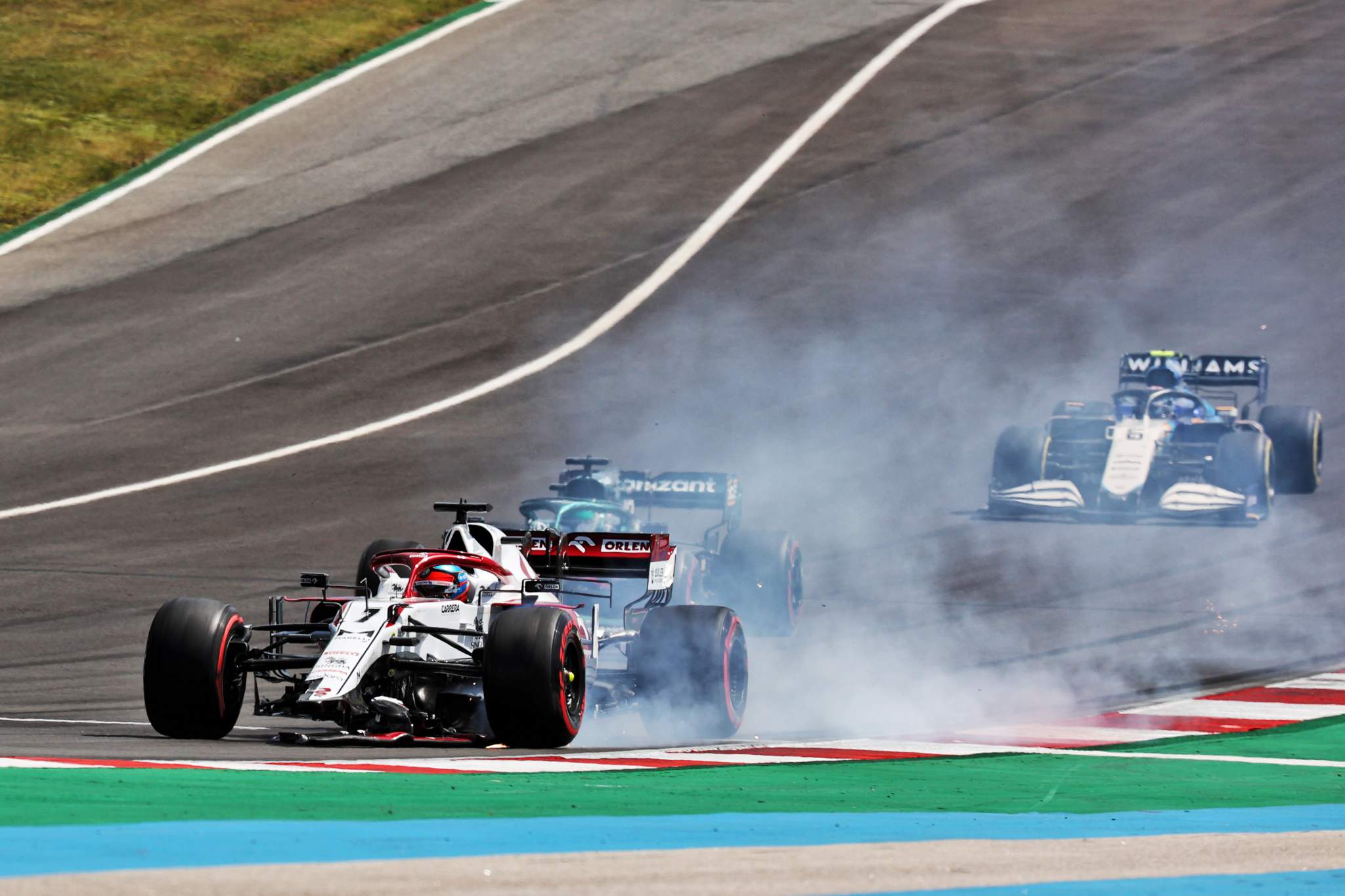 But it only lasted for one lap as a misjudgement ill-befitting of a driver making his 332nd F1 start led to him hitting the back of team-mate Giovinazzi on the main straight at the end of the first lap.

That lodged the front wing under his car and he promptly parked at Turn 1 as he was unable to get around the corner.

To his credit, Raikkonen at least didn’t try to make excuses and accepted “it was my mistake.” 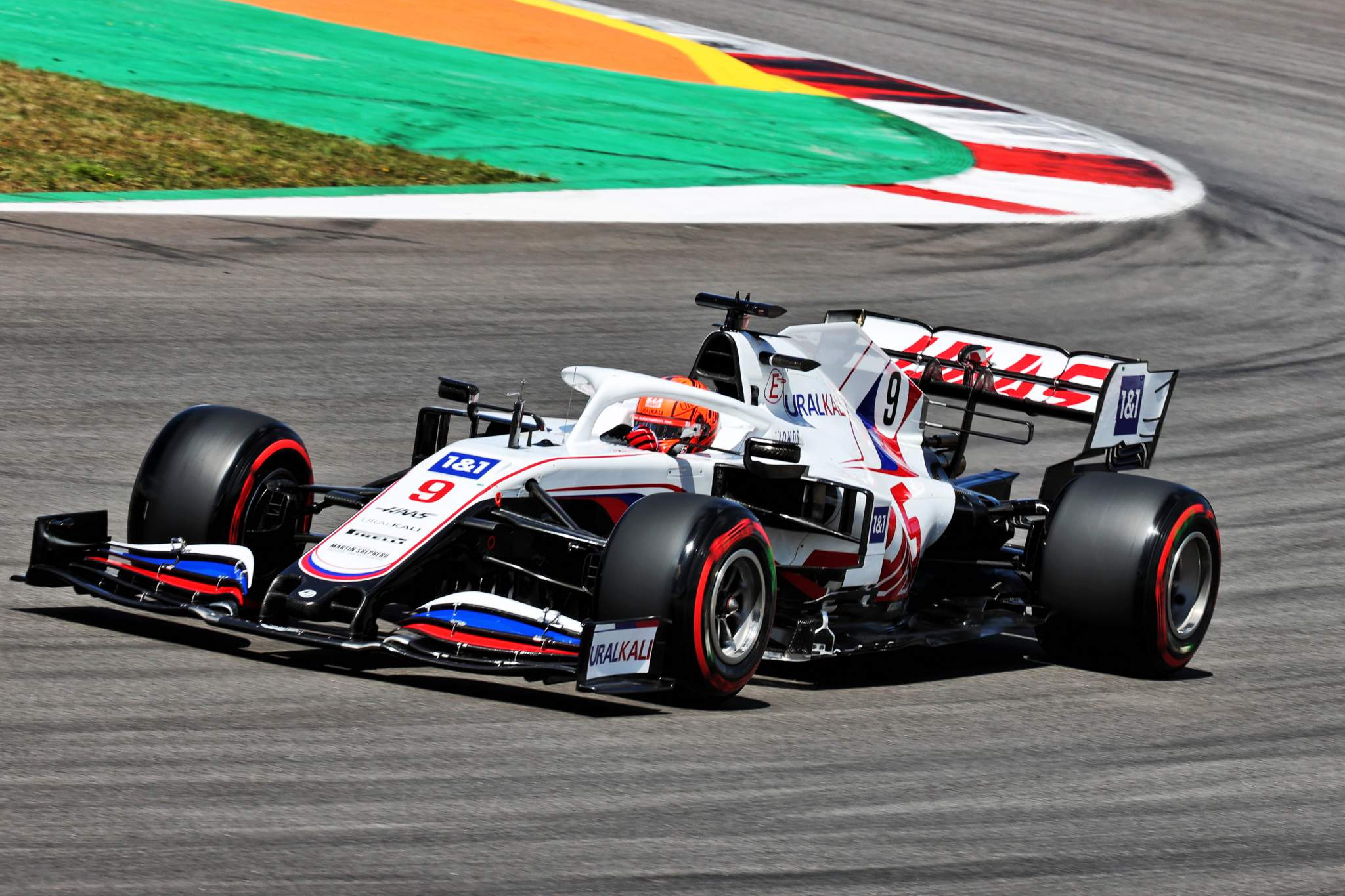 Mazepin did bring the car home in 19th place, but was 64 seconds behind 18th-placed Nicholas Latifi.

But his pace was well off his Haas team-mate, and despite making a second pitstop for a run on softs his best lap was still nine-tenths slower than that of team-mate Mick Schumacher. While Schumacher made something of a breakthrough this weekend, Mazepin appears to be falling further and further behind.