Alfa Romeo has lost its bid to overturn the penalty that cost the team and Kimi Raikkonen their first points of the Formula 1 season two weeks ago at Imola.

Raikkonen finished ninth in Italy but was hit with a 30-second penalty after taking the restart after the red flag in the wrong position.

The 2007 world champion had spun at the first chicane on what is considered a formation lap and dropped from eighth to 10th, and the sporting regulations require a driver to reclaim his position before the pitlane entry or return to the pitlane to take the restart from there.

The stewards admitted there was a “contradiction” as one rule was blocking Raikkonen from following another, so ahead of the Portugal race this weekend Alfa Romeo petitioned for the review on three grounds. 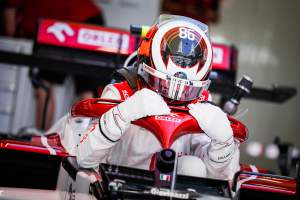 Only one argument was deemed significant and relevant enough to merit a review, as the stewards claimed last time that the rule Raikkonen broke was “consistent amongst several championships, has been in the Formula 1 Sporting Regulations for several years, and has been consistently applied”.

Alfa demonstrated that this case has not happened in F1 before and it emerged the Imola stewards meant the regulations had been consistently applied in Formula 2 and Formula 3, as officials use data from the feeder categories in the event there isn’t a clear counterpoint from F1 history.

But that wasn’t made clear to Alfa at the time, and in addition it has been discovered that the cases the stewards were referring to were also incidents that did not involve a restart following a red flag.

The stewards met with Alfa Romeo on Sunday morning but a decision was not communicated until Sunday evening, reaffirming the original penalty.

While they agree there is no precedence for the circumstances Raikkonen found himself in, and that there is a conflict between the two rules, each is “clear enough as written in its own right”.

The stewards therefore determined that while the team’s actions at the time were understandable, they still resulted in Raikkonen breaching Article 42.6 by not regaining his position in time before the restart and there is a mandatory penalty to apply when that happens.

“Alfa Romeo Racing ORLEN acknowledges the decision of the FIA and the Emilia Romagna Grand Prix stewards to uphold the original penalty to driver Kimi Räikkönen, following a review of the incident. The team’s focus is now fully on next weekend’s Spanish Grand Prix,” the team said in a statement.

Despite Alfa’s review being unsuccessful, as previously reported Raikkonen’s incident may yet result in a rule change.

The idea is for Article 42.6 to only apply on formation laps at the beginning of the grand prix, which means if an incident like Raikkonen’s occurs again and a driver cannot reclaim their position in time for the restart they would be permitted to take the restart in their new position rather than have to return to the pitlane.