Williams acting team principal Simon Roberts has given the first hints of new owner Dorilton Capital’s plans for the team.

Roberts stressed the importance of long-term performance, which is the right mindset to ensure it puts everything into being in the best possible shape for the arrival of F1’s new technical regulations in 2022.

The process of evaluating exactly how to deploy the cash that is now available to the team is ongoing, but while Roberts says the team would not write off 2021, the opportunity presented by 2022 means it is pragmatic to bias its development resources towards the new car.

Work on the 2022 designs is currently not permitted thanks to restrictions brought in to tackle the economic impact of the COVID-19 pandemic, but these will be lifted at the start of next year.

Then, Williams is also likely to have the maximum-available aerodynamic testing time for windtunnel and CFD work based on the new-for-2021 sliding scale that allocates such resource based on reverse constructors’ championship order. 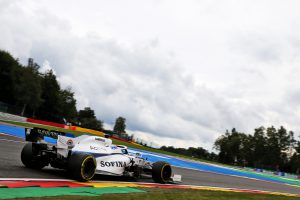 This is provided it does not climb off the bottom of the table, with Haas and Alfa Romeo only one and four points clear respectively.

“We’re looking at all of it,” said Roberts when asked by The Race about plans both for budget and the wider investments needed to get the team closer to the front in F1.

“What we don’t want to do is give up on 2021, we think it’s really important to keep the team alive and active and competing. So we are trying to create a short-term plan and if we could repeat the step that the team made this year going from 2019 into 2020 then it puts us in a good position for next year.

“What we don’t want to do, obviously, is sacrifice efforts towards 2022 because these new rules, the new financial regulations will start to bite, so we don’t know lose that opportunity.

“I don’t want to go into any specifics but we’re looking at all of it and prioritising across the across a long timeframe.”

Since the takeover by Dorilton Capital was completed, Williams has been working through an intensive process to set the longer-term direction.

While the team had pre-existing ideas about the best way to allocate the new resource, it inevitably takes time to create a well-structured strategy that Dorilton Capital hopes should set the team on the right course for the coming years.

Appointing Roberts as acting team principal is symptomatic of the desire to ensure the team remains stable and functional while this process is ongoing.

“There’s a lot to do in the factory, we’re trying to make sure we keep the management team stable with the new owners,” said Roberts. “So that’s really important for them, and also for the rest of the team.

“Me stepping up makes us able to do that and we’re now working with the new owners pretty much every day looking at what we need to do to improve, what the long-term programme is and how we find some performance for the whole team over a long period of time.

“There’s no quick fix here. We’re in it for the long haul and so are Dorilton.”

MOVING TOWARDS THE COST-CAP MAXIMUM

Williams is currently running at a budget below the $145million cost cap that kicks in next year, but does aspire to run at the maximum level in the future.

The team already had a budget allocated for this season, which has not changed significantly since Dorilton took over – although extra money has been injected to deal with debt repayment that is independent of the operational budget.

Roberts could not confirm the team will run at the cost cap next year, but hinted it was likely to do so as it ramps up for 2022. Given the desire to maximise the opportunity presented by 2022, ensuring Williams has the maximum research and development resources to invest in that would be a logical move.

“Our budget is based on getting towards the cost cap, yeah,” said Roberts when asked by The Race if the team would run at the maximum allowed level next year.

“This year it’s too late, we’re only four months to go and we’re pretty much set on where we’re headed. But for next year, we are looking at what we can do. And we have now the finances behind us to do that.

“But it’s not just a given, we will only spend money and invest where it makes sense.”

THE SEARCH FOR A TEAM PRINCIPAL

The question of the long-term day-to-day leadership of the team remains up in the air. Roberts was the obvious choice as acting team principal and is eminently capable of taking the job on permanently should no stronger candidate emerge.

But the team is known to be evaluating a wide range of candidates with the focus on finding someone with a strong F1 track record – a requirement Roberts himself could also fulfil.

Roberts has avoided talking about his own aspirations, saying he is focusing on the job at hand, but did suggest he was keen to continue in the role.

“It’s something we haven’t really focused on,” said Roberts when asked about the possibility of taking the role on a permanent basis.

“To be honest, the whole sale process happened much faster than any of us expected and then Claire made her decision, which was a shock to all of us. The most important thing was to retain continuity.

“So I’m really, really pleased to be asked to step up, I really enjoy it and hopefully I can continue to do it for longer, but we haven’t even discussed it. That’s not the top of my list and it’s not the top of theirs’.

“There’s plenty of work to be done and we’re all focused on that and focused on moving the team forward.”

While new owner Dorilton Capital plans to have team leadership in place that handles the operation of the team, it is inevitably heavily involved in the ongoing process of setting the long-term strategy of the team.

“They’re just trying to right now understand everything they can about the business,” said Roberts.

“They’re super smart and really nice and easy people to work with so it’s great having them around. They just come and get involved in everything they can. They were also in Mugello, which was great for them.

“We are just in that budget setting [stage], looking at investment plans, trying to figure out, effectively, what’s the first thing to do. We don’t want to make mistakes but everything we do is focused on improving our performance in the long term.”

Dorilton personnel have also been on site at the Williams factory as well as attending the Tuscan Grand Prix having arrived on Friday night.

“Matthew Savage [Dorilton Capital Chairman, above left] was in Mugello,” said Roberts when asked about Dorilton keeping a low profile.

“He brought one of his other board members and one of his senior chief of staff.

“They weren’t doing interviews but that was their first foray into Formula 1. And I expect we’ll see them in the future, they’re not hiding.”