Mercedes sees shades of its 2018 Formula 1 battle with Ferrari in its new 2021 fight with Red Bull, but fears this threat will be greater and go the distance.

Despite winning the season-opening grand prix in Bahrain, the first time world champion Lewis Hamilton has won the first race since 2015, Mercedes is as much of an underdog as it’s ever been in the V6 turbo-hybrid era.

Red Bull has emerged from the off-season with a very fast car, allowing Max Verstappen to claim pole position by almost four tenths of a second.

Mercedes, meanwhile, believes its W12 doesn’t have “any advantages” compared to the RB16B, with its strengths being matched by the opposition and weaknesses being punished by Red Bull taking “chunks” of laptime away.

That was trackside engineering director Andrew Shovlin’s post-race analysis, in which he also stressed that facing tough opposition is “not alien” to the team that has won seven consecutive drivers’ and constructors’ championships – citing the 2018 season as the main example.

That season started even worse as Mercedes’ first win didn’t come until the fourth race.

“Some of those we didn’t get everything perfect but some of them Ferrari were just better than us race and quali,” says Shovlin.

“We’ve had some tough years in the past few seasons, this is not alien to us and it’s what we’ve got to work with so.

“It’s two teams that look to be pretty much neck and neck at the moment so I think it’s going to be a tough year.”

Ferrari faded through the season because of a mix of Sebastian Vettel’s errors and the team’s underperformance.

Mercedes is acutely aware of the increased threat posed by a Verstappen-led Red Bull.

Verstappen looks like he has rounded off his remaining rough edges while his team has proven in recent seasons that it can develop its car through the year well.

Its main weakness in the V6 turbo-hybrid era has been starting too poorly to challenge and spending that development time playing catch-up.

But as Mercedes boss Toto Wolff cautions: “Bahrain was always not the strongest race for Red Bull and also they haven’t been particularly good out of the blocks. This weekend shows that all of that is not the case anymore in 2021.

“So I have no doubt that they are [going to be] extremely difficult to beat. They are the ones that are leading the pack.” 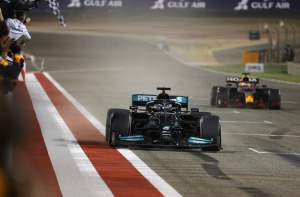 “And they develop, they’ve shown over every season that they’ve got the capacity to put a lot of performance on the car.

“So regardless of the start point, this is not going to be an easy championship. It’s going to be tight. And it’s one that we’re not going to give up on. They’re going to tell you the same.”

Mercedes has an excellent record in recent seasons of minimising whatever challenge it faces. Its effectiveness at either unlocking performance from its existing package (like it did at the end of pre-season in 2019) or pursuing more performance through development (as in 2018) is likely to be required again if it is to make its W12 a consistent challenger, let alone defeater, of Red Bull.

This season’s test is different. Windtunnel and CFD time is reduced, there’s a budget cap in place, and teams all have an eye on new technical rules in 2022. If the next couple of races confirm that Red Bull has a high-speed cornering advantage and it wins at Imola and Algarve, Mercedes cannot just spend or develop its way out of the trouble that would put it in. At least not without consequences.

It seems unfathomable that this will be anything other than Mercedes’ toughest challenge yet. Which is why Red Bull is “enormously” encouraged by Bahrain despite the “palpable” disappointment engineering chief Paul Monaghan felt in the garage after the race. 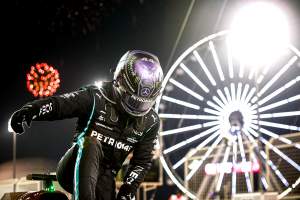 “The prize at the end of the year is very much within the grasp,” he says. “It gives you the realisation that we can challenge for this.

“We’ve got a fast car. We’ve got to pick ourselves up from this one. We’ve got second place and we were fighting for the victory. It’s not as if we’ve been left behind.

“Everyone’s motivated. There is a championship to have here, so let’s get on with it.”

Mercedes will have to find different ways to win races this season. Rarely has it had to rely on strategic plays to win races in recent years, in fact there have been more headline-grabbing strategy blunders than successes. But in Bahrain, even though Monaghan claims Red Bull was not “caught by surprise”, Mercedes was able to outfox Red Bull and win with a slower car.

Being willing to take that risk, and having a driver like Hamilton able to execute the gamble well, is a big asset for Mercedes to have.

But it is also true that the way the Bahrain GP played out will not always replicate itself. Hamilton suspects Verstappen will not run off-track making the pass for the lead in the future. Maybe Red Bull will have a more aggressive hand to play. Maybe sometimes Hamilton will not just have enough.

Winning a championship with a slower car is no easy feat, so the bottom line – as Mercedes has admitted – is that the W12 needs to get faster. Especially as there is no reason to think the RB16B will get slower.

“It’s not won and lost here,” says Monaghan. “Some developments are already in the pipeline for Imola, more for subsequent races. So it’s now a two-pronged fight.

“We need this car to be that we put it down on the ground and run, and it gives us no hiccups. We will put as much performance onto the car as we possibly can by Imola. And then it’s interesting.

“Our destiny is in our control, and we can’t influence what Mercedes, McLaren, Ferrari and everybody else wants to do. So, we’ve got to remain focused. We’ve identified some areas where the car can be improved. And we concentrate on those.

“It’s gonna be a long fight for a long season. We’ve got a quick car, we got a fantastic pair of drivers, a good team – not just the travelling bit but in Milton Keynes.

“We’re strong, and everybody’s aware that we’re going to be challenging all the way through.”

And that includes Mercedes.