Why McLaren had to hinder Sainz by giving him upgraded car

McLaren’s need to introduce the rest of the upgrade package to work with its recently-introduced modified nose “as quickly as possible” led to Carlos Sainz Jr’s qualifying being compromised at the Nurburgring.

Sainz made it to Q3 but was 10th fastest, 0.251s slower than team-mate Lando Norris, who ran the older-specification McLaren even though the team did have enough parts to run the full upgrade on both cars. 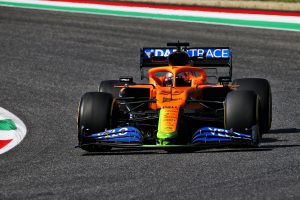 McLaren has previously run the new nose specification, with Norris racing it at Sochi two weeks ago after Sainz trialled it on Friday at Mugello, but brought what team principal Andreas Seidl described as “the parts to complete the package” to the Nurburgring.

The loss of three hours of running during Friday practice led to the decision only to run the new nose and accompanying parts, which includes changes to the floor area in front of the sidepods, on one car.

“That’s why we took this decision to go ahead like we did today.”

Sainz struggled for grip during practice and qualifying, but despite the difficulties he accepted it was important to log a full race distance’s worth of data using the package.

But he complained about the balance from early in free practice and it was clear there was not enough time to get on top of the set-up demands of the car in this configuration.

“With all the new bits that we had on the car and not having a Friday to try and tune in and find the optimal set-up window for all of the new bits has been penalising,” said Sainz.

“And I guess it would have helped to have the Friday to try and understand the new package a bit better.

“If there was one weekend where we didn’t need the Friday to be a washout, it was this one so a bit disappointed with that.”

When asked by The Race if there was a risk that the conditions at the Nurburgring with a rapidly-evolving track and the need to condense running might compromise the hoped-for longer term gains of this weekend in terms of building understanding, Sainz was unsure.

“It’s a very good question,” said Sainz. “We need to let the race happen and see what data the race produces and we will go back home with a lot of laps and a lot of examples to analyse where this package is helping or is not helping.

“Let’s keep our heads down because we want to progress all as a team and we need to keep progressing because of Renault becoming so strong – and also have patience, don’t overreact too much but try and gather as much data as possible going forward. Qualifying was tough.”

McLaren has been working on a new nose and front wing package for a few races. The nose was first run on Sainz’s car on Friday morning at Mugello, with Norris running it throughout the Sochi weekend.

At the Nurburgring, McLaren introduced what has been called the full package on Sainz’s car, which includes a new, or at least modified, front wing.

Each circuit requires different levels of downforce so this package might just be to suit the Nurburgring – it appears to have a more aggressive front wing flap attack angle.

I’ve never been a great fan of this split-flap concept with the outside stepping down to a lower angle. When you separate the airflow like this, you can very easily get transverse flow as one section becomes more demanding on the airflow than the section beside it.

When you carry out any development on the nose or front wing, the changes to the airflow can have serious consequences further downstream. As we can see, McLaren has been carrying out lots of investigation of the flow using flow-viz paint on the bargeboard area.

These parts might not be optimised yet, but there will be an influence on the flow over them so gathering data to back up the CFD analysis is important to allow them to take the next step.

As Friday’s practice sessions were cancelled, McLaren opted to throw everything on the car for a very short FP3. If it works out, that’s great but it’s also very easy to lose yourself and potentially throw away a good result from a car that you understand.

Only McLaren will know if it has shown a positive result, but whatever it qualified with Sainz is stuck with for the race.

The comparison picture of the rear of the car shows the difference in the cooling requirements that are required for a very cold Nurburgring.

The open area of the engine cover/sidepods is the main exit area and being able to close it down as much as possible is just better for everything – more downforce and less drag all come for free.

But you need to be careful you don’t overdo it because when it comes to the race you could end up struggling to follow anyone for any length of time.