What was the car tweak that got Ocon back on form? - The Race
Skip to content
Formula 1

What was the car tweak that got Ocon back on form?

Esteban Ocon is confident the changes made to his Alpine Formula 1 car have eliminated the problems that held him back in the run of races preceding the British Grand Prix, with the rectification of a front suspension problem understood to be key to his improvement.

Following his struggles at the Red Bull Ring, where he failed to escape Q1 on both occasions and in the previous race at Paul Ricard, the team made a series of changes of parts in an attempt to troubleshoot the problem. This was made easier by the fact the work could be done at the team’s Enstone base near Silverstone. 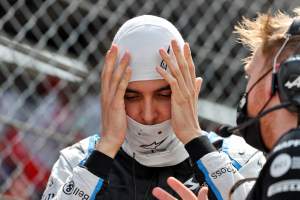 This included a change of chassis from number 05, which Ocon had used for the previous races this year, to 04. This was the chassis that Ocon raced from the start of last season up to and including the 2020 Portuguese Grand Prix.

Alpine executive director Marcin Budkowski said earlier in the Silverstone weekend that what he called “a small issue” had been spotted on the front suspension.

While he said that the team didn’t feel this was the root cause of the problems, Ocon was much happier with the feel of the front end under braking and on turn-in having struggled with this in Austria. This appears to be central to his improved pace at Silverstone.

When asked by The Race if the suspension problem was the key change, Ocon said “I’m not going to go into details”. But he did say that the work done by the team had resulted in the improvement in form.

“I’m pretty sure we’ve solved the issue that we had,” said Ocon. “It’s not only a chassis change that we’ve done, there were a lot of other things and other parts that we changed. 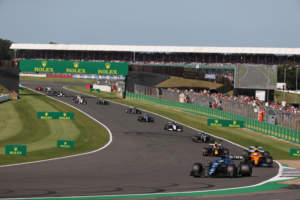 “We spotted something and we questioned if that could be the reason. The only thing I care about is that I feel good now and as soon as we put the car [on track] in practice one, it was competitive like it should be.”

Although Ocon missed out on a place in Q3 and finished two places behind Fernando Alonso both in Friday qualifying and Sunday’s race, he was just 0.095s off his team-mate in qualifying.

This was the closest he had been since Azerbaijan, where he was just 0.076s slower. He also finished just four seconds behind Alonso in the grand prix.

“Looking at the last three races, we were completely out of where the car was performing,” said Ocon. “We were a lot slower than the other side of the garage and the car was always capable of being in Q3 or just, that’s where we were supposed to be fighting, and that’s what we’ve done this weekend.

“The first round of Q2 I was inside the top 10. There was a messy last run in Q2 run two with a lot of traffic and overtaking in the last corner before starting the lap. But otherwise, we could have been in Q3.

“That hasn’t been the case for a long time so I’m pretty sure we’ve spotted what was wrong, and hopefully we can continue that run of scoring points like we were doing in the beginning of the year.”

There is the possibility that the circuit configuration at Silverstone, which has fewer corners requiring more aggressive rotation of the car at corner entry, might have masked an ongoing problem if the cause of the problem was Ocon struggling with the car. This also appeared to help McLaren’s Daniel Ricciardo.

However, Ocon’s form not only improved compared to team-mate Alonso but also others in F1’s midfield. That, combined with his confidence that the car felt much better, likely indicates that there was an underlying problem. 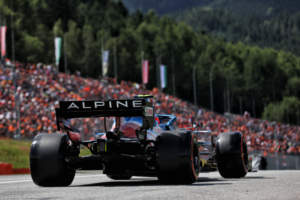 While the exact nature of the front suspension problem has not been revealed, even if the team doesn’t believe it explained the deficit it is possible that the impact on the feel of the front end when it’s loaded up on the brakes and when lock is applied limited Ocon.

Such an effect is difficult to quantify but given the troubles Ocon had with lockups and rotating the car at the Red Bull Ring in particular, it all adds up. Although the team feels that the problem wasn’t manifesting itself at Paul Ricard, if it was a question of feel that was gradually getting worse, it’s possible Ocon started to detected it when the effect was still subtle.

Ocon himself also paid tribute to the work done by the team, referring to being “proud of the trust the team has put into me”. The work has certainly paid off, with Budkowski noticing the effect.

“I think we’re back to the normal Esteban,” said Budkowski. “He had a bit of a nightmare the last two races. I wouldn’t say the last three, the last two really were the ones where there was clearly something not clicking between Esteban and the car.

“But from the get-go, [he was] with the car, happy with the setup changes.

“It was much needed, to rebuild his confidence in the car and himself.”

The Hungaroring should provide confirmation that Ocon’s problem has been solved given it’s a dramatically different circuit configuration to Silverstone. Then, Ocon’s challenge will be reversing a run of defeats to Alonso that stretches back five events.