The Tuscan Grand Prix stewards accused only two drivers of rules breaches then warned 12 for their roles in causing Sunday’s huge four-car crash at a safety car restart.

Daniil Kvyat and Kevin Magnussen were the named parties but by the end of the investigation the only drivers running at the time of the crash who didn’t receive a warning were the top three at the time (Valtteri Bottas, Lewis Hamilton and Charles Leclerc) and the bottom three (Romain Grosjean, Kimi Raikkonen and Sebastian Vettel).

The stewards felt “the root cause of this incident was the inconsistent application of throttle and brake” through this pack and “an extreme concertina effect which dramatically increased as it moved down the field”.

By analysing the onboard footage from the offending drivers and the three that avoided them at the back of the field, plus hearing their accounts, we can piece together what really happened to mean that 12 drivers eventually played a role in a crash that only featured four of them.

What every driver in the pack did 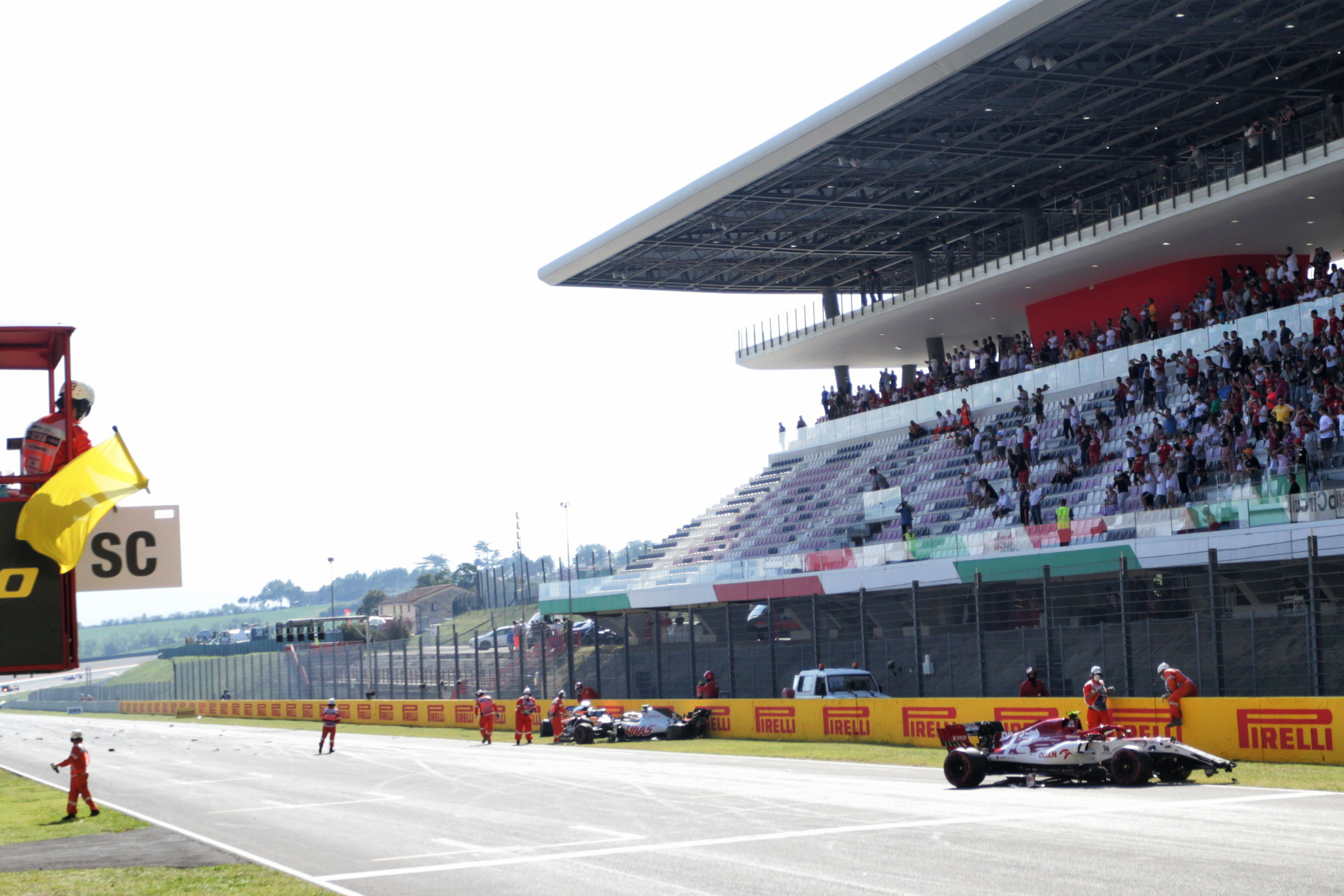 Albon stayed pretty much tucked up behind the lead trio, positioned slightly to the left of Leclerc and might have been guilty of the absolute tiniest of false-starts as he seemed to very, very briefly accelerate then decelerate.

Behind him, Stroll had his own micro-acceleration that became a full lift, though he was never dramatically behind Albon and certainly not accelerating and braking harshly.

Ricciardo was the first driver to leave a significant gap to the car in front and was maintaining that gap with small decelerations right up until the moment Bottas gunned it out front. 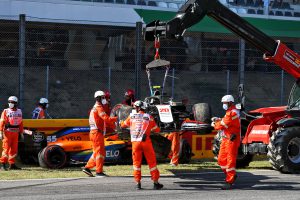 This brought Perez right up under the rear wing of the Renault, so Perez had to get out of the throttle as well – which forced Lando Norris into a constant pattern of speeding up and slowing down after exiting the final corner.

These five cars had their own accordion effect as tiny, tiny movements at the head of the train trickled back to the point where Norris was having to make bigger speed adjustments.

And that caught out Kvyat, who had left a major gap – bigger than Ricciardo’s to Stroll – to the cars ahead as he bid to strike at the right moment with the perfect slingshot.

But all that meant was he had to get out of the throttle quite significantly, almost certainly the biggest deceleration of the leading group, as the AlphaTauri driver committed too early and caught the cars in front while they were still waiting to start properly.

“Everyone in front of me felt like the race was going, and we were all flat out. And then someone realised the race was not on” :: Carlos Sainz Jr

So the knock-on effect got bigger. Ocon trailed Kvyat quite closely out of the final corner and was clearly using him as his reference point, which meant he went when Kvyat went then had two or three big stop-start moments nearer to the lights.

That caused a problem for Russell, who had left a gap to Kvyat and Ocon and responded to their big acceleration by going to full throttle for a good three or four seconds – then had to brake quite significantly.

He was the last car in the queue to get away with it.

Why did the others crash so heavily? 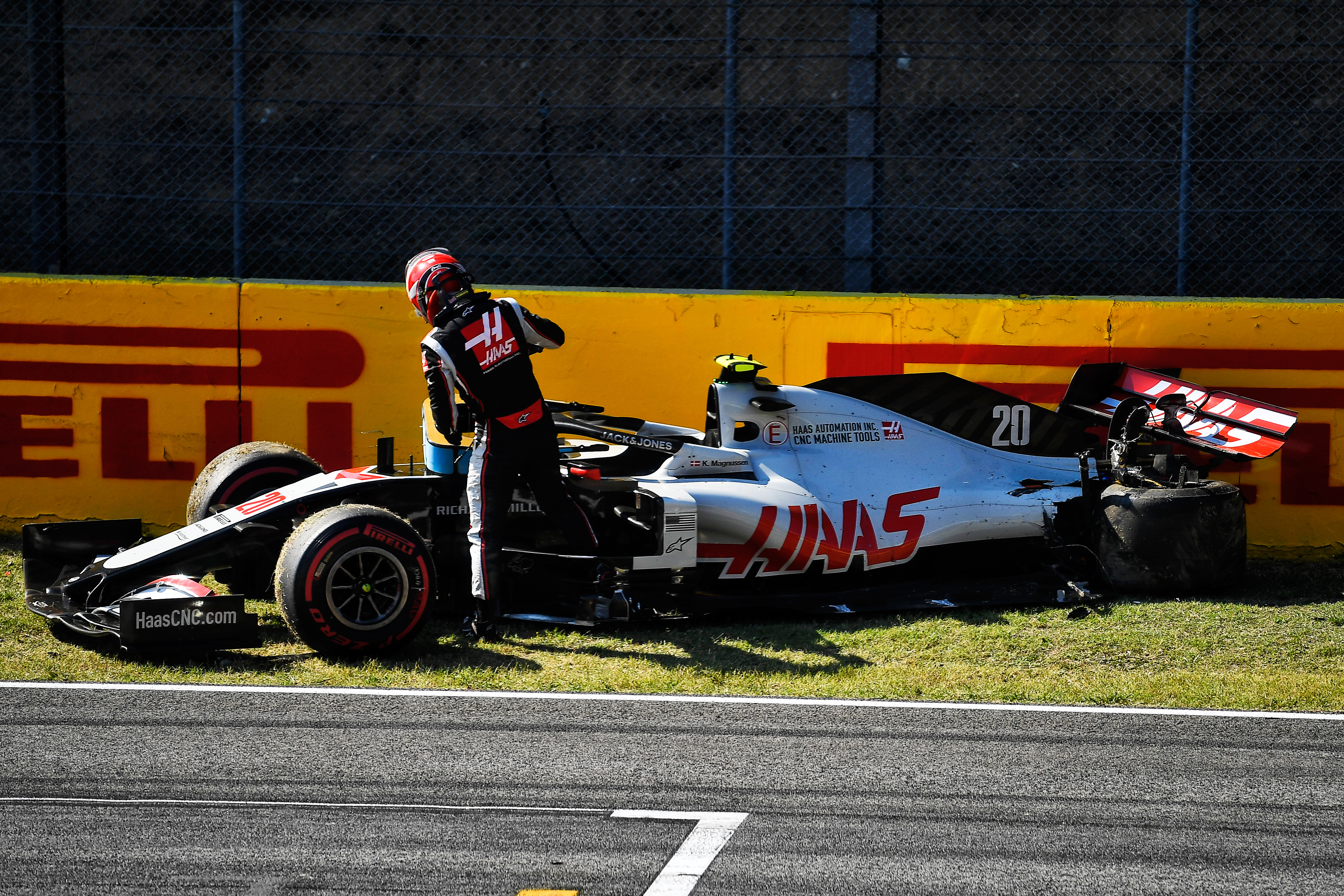 Magnussen was quite close to Russell exiting the final corner and responded to the Williams’s primary acceleration, then reacted quickly to Russell getting on the brakes and slowed his Haas without drama. Until someone piled into the back of him.

To get an idea of just how ridiculous the concertina effect had got by this point it wasn’t the car directly behind Magnussen that assaulted him. Latifi kept extremely close on the exit of the corner but just – just – ducked left to shoot past Magnussen’s slowing car.

“I exited the last corner and the immediate cars in front of me all accelerated again, so I accelerated and we were flat out for probably a good four seconds,” said Latifi.

“That was fucking stupid from whoever was at the front!” :: Romain Grosjean

“You’re thinking that everyone is going and then everyone brakes in front of you.

“I tried not to jam on the brakes, just flat out and I veered to the left to try and slow down as smoothly as possible.

“But then I almost hit Magnussen. So it’s going to be even worse for the guys coming behind me who are coming at an even higher speed and seeing less.”

It was worse. Unfortunately, Giovinazzi replicated the actions of the cars in front and trailed them very closely. So though Latifi was able to jink out of the way of Magnussen at the last second, Giovinazzi was “completely flat out”, slammed into the left-rear of the Haas and then cannoned into the slowing Latifi as well. 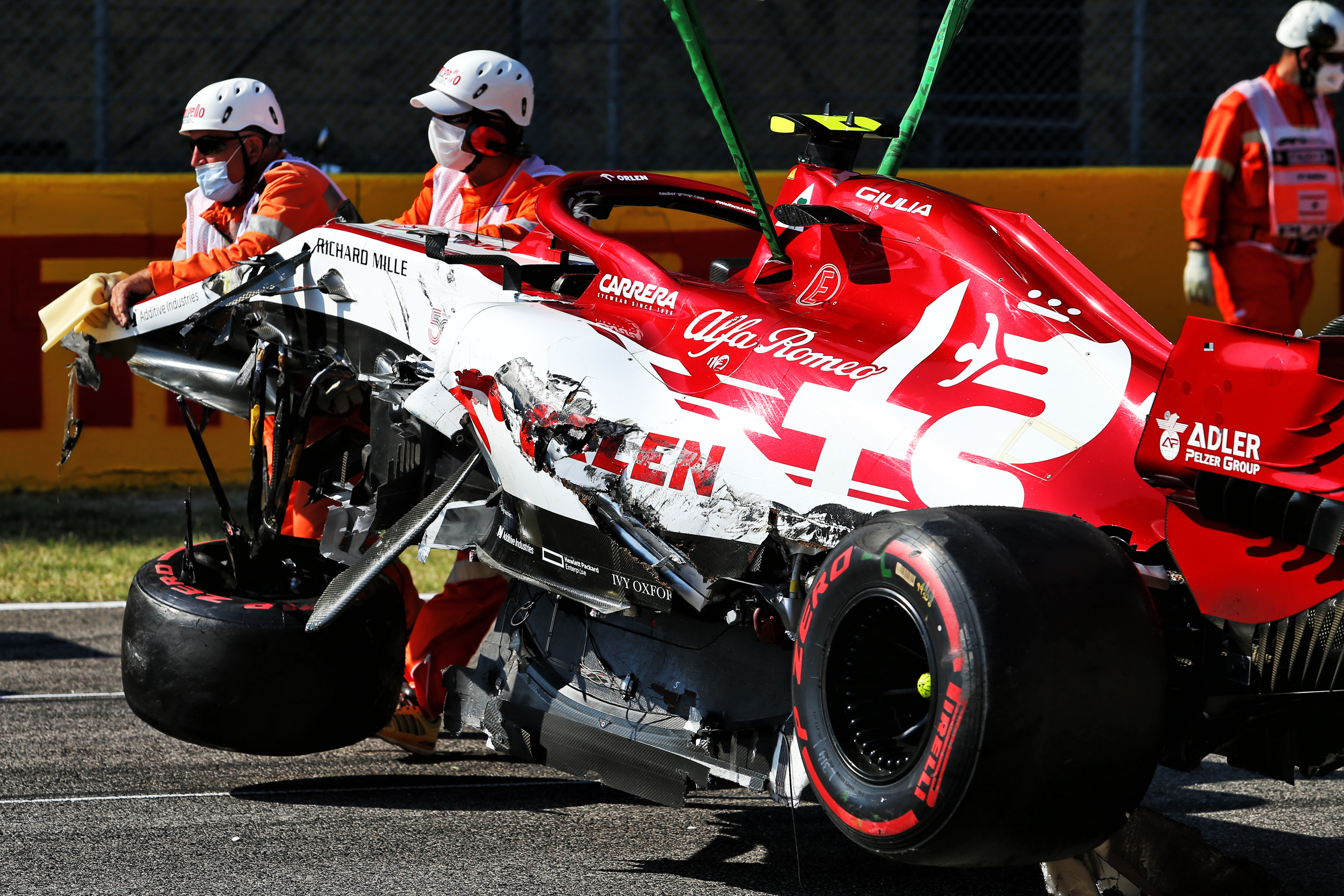 Sainz, close to the back of this train, was then confronted with a wall of cars while at full throttle, and could do nothing to avoid a sickening impact.

“It felt like everyone in front of me felt like the race was going, and we were all flat out,” he said. “And then someone realised the race was not on.”

Grosjean was lucky not to be part of that mess having committed to following Sainz but to the inside, which gave him enough of a view of the slowing Magnussen to provide a split-second’s advantage in getting on the brakes and just avoid getting caught up.

Which also gave him enough time to get immediately on the radio and scream: “That was fucking stupid from whoever was at the front!

“They want to kill us or what?! Fucking hell!

“Whoever did that should be fucking banned!”

Behind him were the other ‘do-gooders’, Raikkonen and Vettel. Raikkonen was slow off the final corner and had the freedom of Tuscany to react to the madness in front, but even he had to take evasive action as he entered a sea of smoke, broken parts and stricken cars.

Why the field compressed more than normal 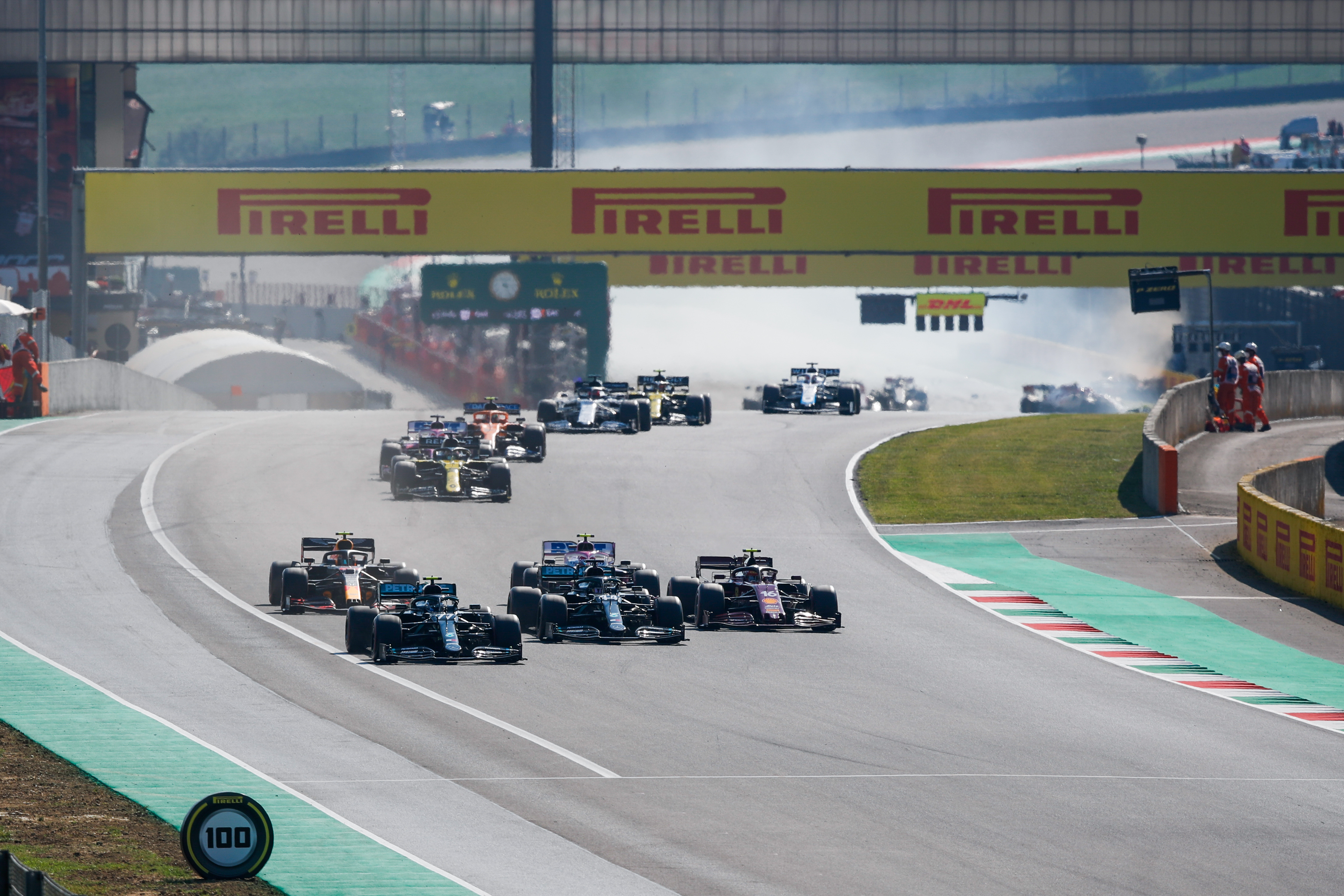 Image courtesy of F1 and FIA

Two key factors contributed to these circumstances. The first was the safety car lights going out late – to the point that race leader Bottas had no chance to create a gap until after the final corner. Until the safety car’s lights go out the race leader must remain within 10 car lengths, so Bottas had to wait to be allowed to set the pace himsef. Drivers felt this wait was longer than normal.

Race director Michael Masi disputed this claim, responding that it was no later than at other tracks, but many drivers and at least one senior team figure insisted that it was.

“Clearly, the safety car light got switched off a lot later than what we are used to” :: Esteban Ocon

What was indisputable was that racing would only resume once they reached the control line, and the knock-on effect of when the safety car lights went out meant Bottas was never going to accelerate immediately. Thus the second factor, which was how far down the straight this line (the pitlane exit) is.

“I’ve rewatched a bit of the video,” said Ocon. “Clearly, the safety car light got switched off a lot later than what we are used to.

“From where I was sitting in the car I got told the safety car is in this lap, but the guys were still driving like if there was another lap. So I thought maybe there was a misunderstanding with me and the team, maybe we are going for another lap! 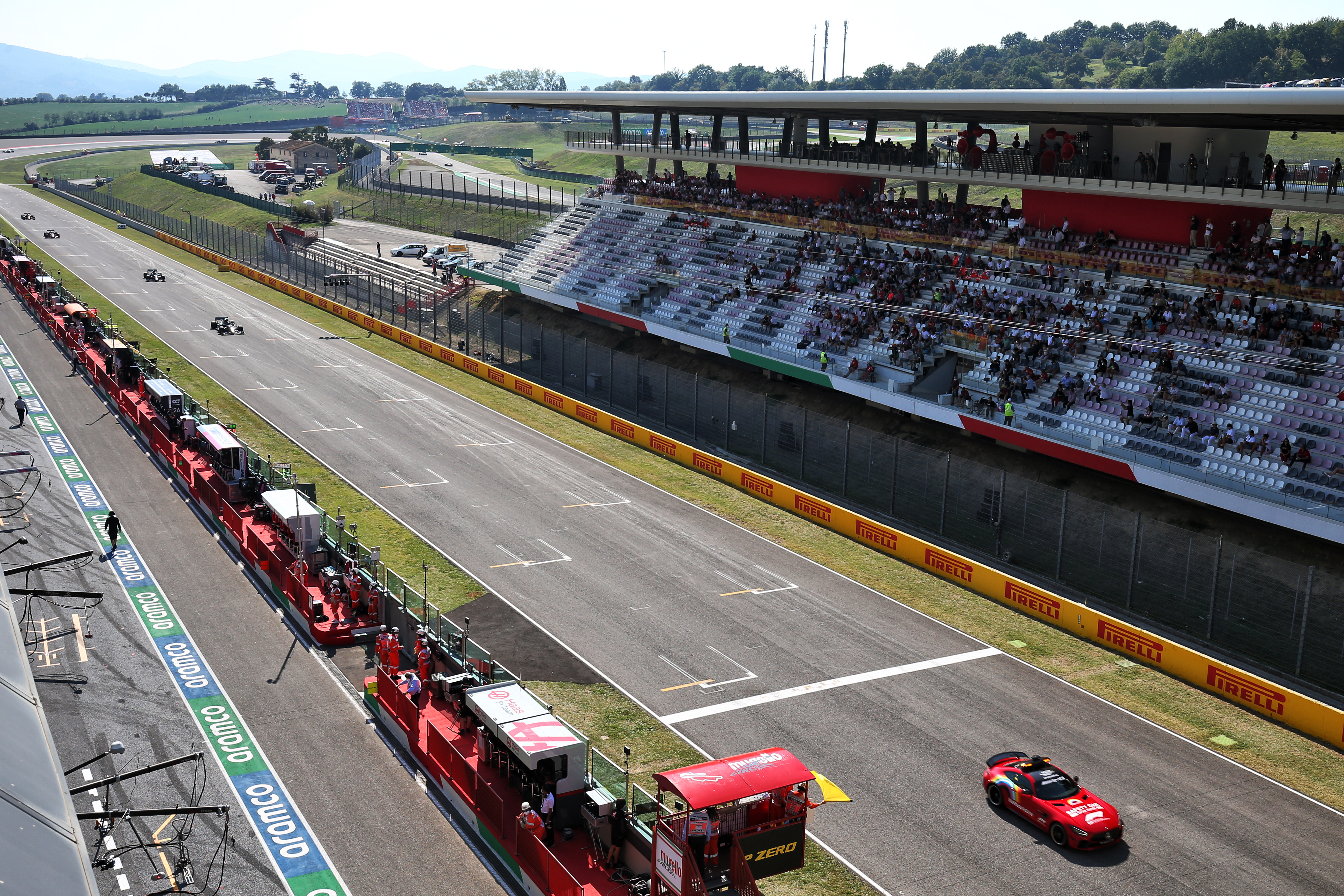 “We stayed for a very long time at slow speed. Obviously there’s a short acceleration which increases from the back, because the guys at the back are catching up more of a gap, so it’s a bit like traffic on the motorway.

“And it caught everyone by surprise just behind me. Got lucky to not get hit in the back. But some didn’t unfortunately.”

Latifi said the impact of cars accelerating then braking was so severe he thought the restart was happening before he’d reached the final corner and nearly hit Magnussen there.

“It’s a difficult judgement to make but definitely I think there has to be a bit more discipline from all the drivers in situations like that – to not be nose to tail in case something like that happens, but to keep a reasonable gap,” he said.

“I truly think the accident was caused by some drivers in the mid-pack leaving too big a gap and accelerating flat out into that gap thinking, ‘Oh, now I’ve got to get close because the race is about to restart’.” 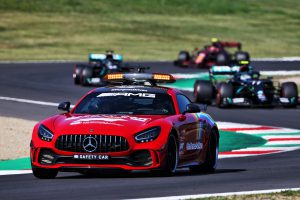 Masi was adamant the restart procedure played no part in creating the circumstances for the accident at all.

He, like the stewards, acknowledged the special circumstances of this track but said that was why the drivers were “advised very clearly” in the briefing on Friday evening not to overtake the safety car before the safety car line at pit entry, and that they could not overtake until the pitlane exit.

“They can criticise all they want,” he said. “If we have a look at a distance perspective from where the lights were extinguished to the control line, it’s probably not dissimilar if not longer than at a number of other venues.

“The lights go out where they do. The safety car is in pitlane. We have the 20 best drivers in the world.

“In the Formula 3 race, those drivers in the junior category had a very, very similar restart to what was occurring in the F1 race and navigated it quite well without incident.”

One conclusion that was agreed on was that Bottas was not responsible, as he had maintained a consistent pace at the front and had the right to set the speed for the restart.

The same could not be said for the cars behind, which caused a ripple effect so significant that last-placed man Vettel actually felt relieved to be so far down the order.

“Even for me, it was a bit erratic in terms of speeding up, slowing down, speeding up,” he said.

“Then finally speeding up and then everybody was jumping on the brakes and there was a bit reacting.

“Kimi was quite far behind the guy in front. Probably it was better for the two of us.”