Sebastian Vettel described the opening day of practice for the Spanish Grand Prix as “probably our best Friday” having run the Aston Martin Formula 1 team’s latest upgrades for the first time.

Team-mate Lance Stroll ran the upgrade to the floor during the Portuguese Grand Prix weekend after parts were rushed through, but despite failing to escape Q1 the team believed it was a tangible improvement.

Vettel now also has the upgrade and set the eighth fastest time in FP1 with a time 0.730s off the pace before going 11th quickest in FP2, 0.777s down. He also showed consistent race pace on his long run on mediums.

“I think it’s fair to say it was probably our best Friday,” said Vettel.

“I was happier with the car. Obviously it is a different track, different conditions, but I felt more at home. So it seems to improve.”

With his pre-season testing limited to just a day-and-a-half after moving to Aston Martin from Ferrari, Vettel is one of a group of drivers who have changed teams that have been working to get on top of new cars in the early weekends of the season. 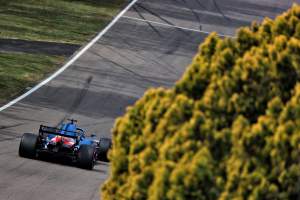 He reached Q3 for the first time in Portugal last weekend, but only finished 13th in the race, and is hopeful that the step forward from the package means both he and Stroll can challenge for the top 10 in Spain.

“Absolutely, I think it’s a step forward, so it’s good to tick that off and now we try and improve the package,” said Vettel when asked if he feels the benefits of the upgrades.

“I think that’s [Q3] the sort of the region we are targeting and if everything goes well, we might get in that region.

“It’s going to be very, very tight. There’s a lot of weak spots, so we just look at ourselves, what we can do better for tomorrow and then that’s maximising our chance for Q3.”

Aston Martin has fallen short of its competitiveness of last season when it had, on average, the third-fastest car and finished fourth in the constructors’ championship as Racing Point..

The team has blamed this decline on the aerodynamic regulation changes that have mitigated against low-rake cars like its AMR1 and the Mercedes W11.

That means the gain in performance from the new floor – reckoned to be worth at least several tenths of a second – is critical to its prospects for the season. 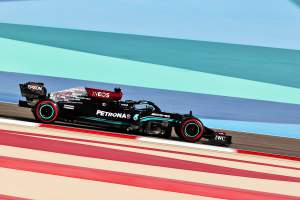 While Stroll’s performance in Portugal shrouded the gains offered by the upgrade, the team’s post-race analysis confirmed there was a step.

“The race analysis we have done duly showed that Lance was able to access greater race pace than was Sebastian, the result of the aero updates uniquely fitted to his car, which he used to good effect.”