Max Verstappen and Red Bull have opened up on the decision to commit to the softs as the starting tyre for tomorrow’s Hungarian GP, with Verstappen indicating it wasn’t planned but could be beneficial.

Along with the two Mercedes cars of Lewis Hamilton and Valtteri Bottas, Verstappen looked nailed on to go through Q2 on the mediums to lock them in as the starting tyre – and indeed used the yellow-walled tyre on his initial run in the second segment. 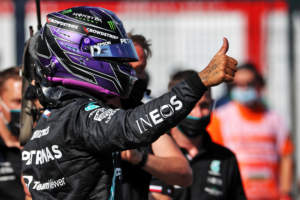 But best lap of 1m16.769s, despite two attempts, left him potentially vulnerable to late-session improvements and using the softs on his second run the Dutchman improved on his time, thereby changing his compound for the start.

The softs are bound to degrade quicker in the opening stint tomorrow, but give Verstappen a chance to attack the two Mercedes – which locked out the front row ahead of him – with a better launch.

“It’s of course going to be different, the grip was quite a bit higher on these tyres, so of course we’ll find out tomorrow. It’s going to be really hot, so naturally of course the softer tyre will not last as long as the medium, but nevertheless, it will give us a good opportunity on the line,” he said.

“It was just because the others also were on the soft and they were improving their laptimes. My laptime on the medium would’ve really been on the edge for a top 10, that’s why we decided to finish the lap.”

Verstappen later elaborated on why Red Bull didn’t just give him a second Q2 run on the medium – like Mercedes did with Bottas.

“We talked about it and they told me that they wanted to go on the soft instead and then keep the medium new [for the race].”

Verstappen’s initial medium time would’ve ultimately been good enough for Q3 anyway, but just by around a tenth, which the team wouldn’t have known when he was finishing his lap.

“We couldn’t do the same time as Lewis did on the medium, and we felt maybe that tactically – it’s a different route, I’d prefer that tyre for the start tomorrow,” Christian Horner told Sky of the soft-tyre start. 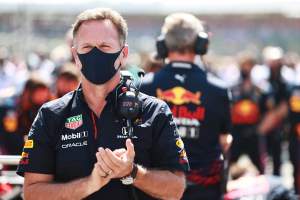 “So we’ll see, we’ve got to drive an attacking race tomorrow, you know how hard it is to overtake here, so the strategy is going to be crucial.”

“We will find out tomorrow after the race if it was right or wrong and we will learn from that and take that into account in future races. But at the moment, I can’t really say if it is good or bad,” Verstappen added when asked by The Race about the decision.

Verstappen’s team-mate Sergio Perez will also start on softs in fourth, prompting Bottas to say it was “all to play for” on Sunday.

Hamilton said he was “surprised” by the decision from those behind the Mercedes duo to set their fastest Q2 laps on the soft tyres but is wary of the threat Verstappen will pose off the line.