Ferrari Formula 1 driver Carlos Sainz says a “35-40kph” tailwind left him a passenger in his Hungarian Grand Prix qualifying crash despite him entering the corner slower than on his previous run.

Sainz had been rapid in final practice and the first part of qualifying but crashed at the final corner after suddenly losing the rear of his car.

He said he was very frustrated and “very surprised”, so immediately went to check the data after making it back to the paddock as he was perplexed over what he had done wrong.

Sainz says the data shows an increased tailwind of more than 25kph versus his best run in Q1.

“It’s not a mistake I’ve done in a long time and obviously I was very surprised with it,” he said. 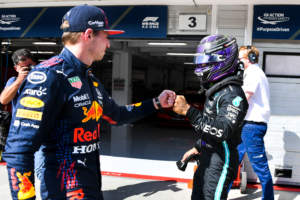 “I went straight away to the garage to see what had happened on the data and what I could have done differently.

“After having a look I’m more calm about it because I saw I actually entered the corner 5kph slower than the previous run but there’s a 35-40 kph gust of tailwind compared to a 10kph tailwind in Q1 and this probably just sent me on a massive oversteer.

“It’s unfortunate but at the same time I don’t want to use it as an excuse. I owe an apology to the team.

“It’s not something I’m going to dwell too much on because I’ve seen the data and it’s left me more calm about it.”

Sainz had taken a slower approach into the corner after suffering with “massive understeer” and losing a bit of time on exit in the first part of qualifying.

He said he “couldn’t believe it” when he lost control but pledged to “learn from it” as it was an unusual experience in his new-for-2021 team.

Asked by The Race if he such an increase in wind speed leaves the driver a passenger, Sainz replied: “Yeah, unfortunately with these cars you are.

“I must say once I saw I’d entered the corner slower than the previous run, I said ‘OK, I didn’t try anything crazy or stupid and just lost it’. It’s how it goes sometimes. I’ll learn from it.

“It’s unfortunate because I felt on top of the car in Q1 and FP3 so I feel like there was a good result there on the table.

“It’s part of the learning process, I guess, with this car and I’m going through these kind of experiences to keep learning and come back stronger in the second half of the season.”