Championship leader Verstappen hasn’t been on pole position since the season-opening Bahrain Grand Prix this season, but he put that right with a commanding final Q3 lap that saw him set a 1m29.990s.

He was 0.258s faster than Hamilton, who had made wholesale set-up changes to his Mercedes prior to qualifying after a troubled final practice session on Saturday morning. 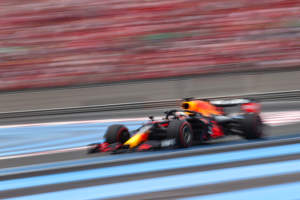 Hamilton’s Mercedes team-mate Valtteri Bottas was unable to convert his strong practice pace to a first pole at Paul Ricard, but he did beat the second Red Bull of Sergio Perez to third place.

Carlos Sainz was the quicker Ferrari throughout practice and qualifying and he transferred that pace into fifth place.

A track limits violation at Turn 6 cost Pierre Gasly his first Q3 flying lap, but he recovered strongly to take sixth place on the grid at his home circuit.

Sainz’s team-mate Charles Leclerc was on pole position for the previous two grands prix, but he could only manage seventh on the grid.

Lando Norris was eighth-fastest for McLaren, ahead of the Alpine of Fernando Alonso. Team-mate Daniel Ricciardo made it into Q3 for the first time since Barcelona, but was slowest of the 10 drivers in Q3.

Esteban Ocon, fresh from signing a new three-year deal with Alpine, was eliminated in Q3 and will start his home race from 11th position.

Aston Martin’s Sebastian Vettel was knocked out of Q2 in 12th place, while Antonio Giovinazzi qualified 13th, placing ahead of his Alfa Romeo team-mate Kimi Raikkonen for the fifth time in seven rounds.

Mick Schumacher gave Haas its first Q2 appearance of the season in unorthodox circumstances, as he crashed with less than a minute left on the clock.

He was 14th quickest as drivers were completing their final flying laps and the red flag brought out by his stricken Haas at Turn 7 denied those behind him a chance to improve.

Nicholas Latifi was denied a place in Q2 by his Williams team-mate George Russell by just 0.002s in 16th place. Russell maintained his 100% Q2 record this season and qualified in 14th place ahead of Schumacher.

Lance Stroll had his first lap time deleted for a track limits infringement, and his second run was stopped by the red flag for Schumacher’s crash. The Aston driver failed to set a representative time and will start the race from 19th.

Yuki Tsunoda also found the barriers on the exit of Turn 1 a few minutes into Q1 – his third qualifying crash of the season.

His AlphaTauri was sent backwards in the wall and after a couple of minutes of trying to restart the car, Tsunoda was forced to get out. With no time on the board, he will start 20th and last in Sunday’s race.