Lewis Hamilton has suggested a return to refuelling could be a solution to both Formula 1’s increasing car weight and the increasing stress placed on Pirelli’s tyres.

The seven-time world champion made the comment after qualifying at the French Grand Prix, where Pirelli has stipulated higher tyre pressures than normal as part of a response to two high-speed failures at the previous race.

Pirelli’s tyres have constantly been under scrutiny in its time as F1’s sole supplier with the main mitigating factor in recent years being that it is having to deal with F1’s heaviest and fastest cars, which means the tyres face greater loads than ever before.

He said that is “unfortunate” that the response to recent failures is to run with “higher pressures than we’ve ever had” at Paul Ricard and believes fundamental factors are creating a difficult situation.

“The cars are getting [even] heavier,” he said. “I don’t know who’s making that decision. 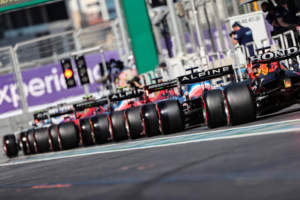 “It’s going to be potentially even worse next year with a heavier car again.

“It puts a lot of pressure on Pirelli, to continue to deliver us performance, but also safe tyres.

“Usually in our discussions we’re just always asking…safety is so, so important and we’re seeing more and more of these incidents.

“We’ve got to make sure we work towards not having those in future.

“If that means like next year maybe going back to refuelling, so the cars are lighter or something like that, so we don’t put so much pressure on these tyres for safety, that could be a good thing.”

F1 banned refuelling for the 2010 season.

Presently the cars start a grand prix with more than 100kg of fuel onboard but in the final year of refuelling, starting loads could be as low as one-third of that.