The ‘underestimated’ and unlucky F1 driver fighting to continue

Alfa Romeo technical director Jan Monchaux recently described Antonio Giovinazzi as “one of the most underestimated drivers on the grid”. How he is regarded is difficult to judge given opinions differ, but you can make a strong case for him being the most unlucky driver in Formula 1 in 2021 given his lack of reward after a good start to the season.

In three out of four races, Giovinazzi has been hit by slices of misfortune outside of his control. Even in the race he didn’t, finishing 12th in Portugal, he had to survive being hit in the rear by team-mate Kimi Raikkonen at the end of the first lap.

In Bahrain, having initially slipped behind Raikkonen then re-passed him at the restart, Giovinazzi lost seven seconds to what he called a “chaotic” pitstop and ended up 11th. After his disagreement with Nikita Mazepin at the start of his final Q1 lap, he was running ninth at Imola when he had to make a pitstop to remove a visor tear-off that had caught in a rear brake.

After the relatively straightforward Portugal weekend, in Spain a disastrous pitstop under the early safety car caused by valve damage that led to a left-front deflation, combined with an erroneous delta time, led to him restarting 12 seconds behind the pack and without one of his sets of mediums. That condemned him to an eventual 15th in a race where he might have been in the mix for a points finish. 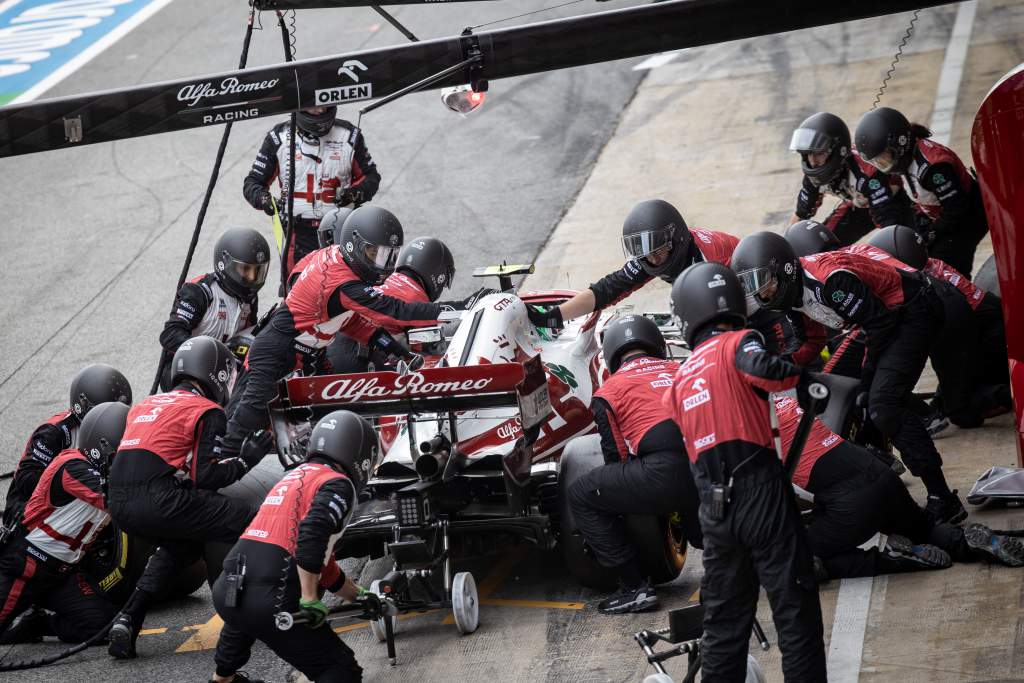 That Giovinazzi’s races have been going well in terms of what he’s doing behind the wheel is a clear sign of improvement. His qualifying pace has always been good, and this year he’s beaten Raikkonen three times out of four – with the Mazepin incident at Imola possibly preventing a 100% record. But prior to this year he has been more erratic in races, with a few too many errors and question marks over consistency.

Put it to Giovinazzi and he agrees his race form has improved. He points to the learning of experience alongside Raikkonen in his three full seasons with the Sauber-run Alfa Romeo squad.

“You touch the right point,” Giovinazzi told The Race. “The problem is beside me, I think I have one of the best men in the race there [is]. Kimi is really strong from lap one, managing the tyres, fuel, the car, the race in general so you learn a lot from him – especially in Formula 1, which is really complicated.

“It’s not like the lower categories where you just need to push. Here, during a race you need to understand when is better to push, when is better to save. So it’s not easy and with Kimi beside me it was really good for me to learn a lot of these things. 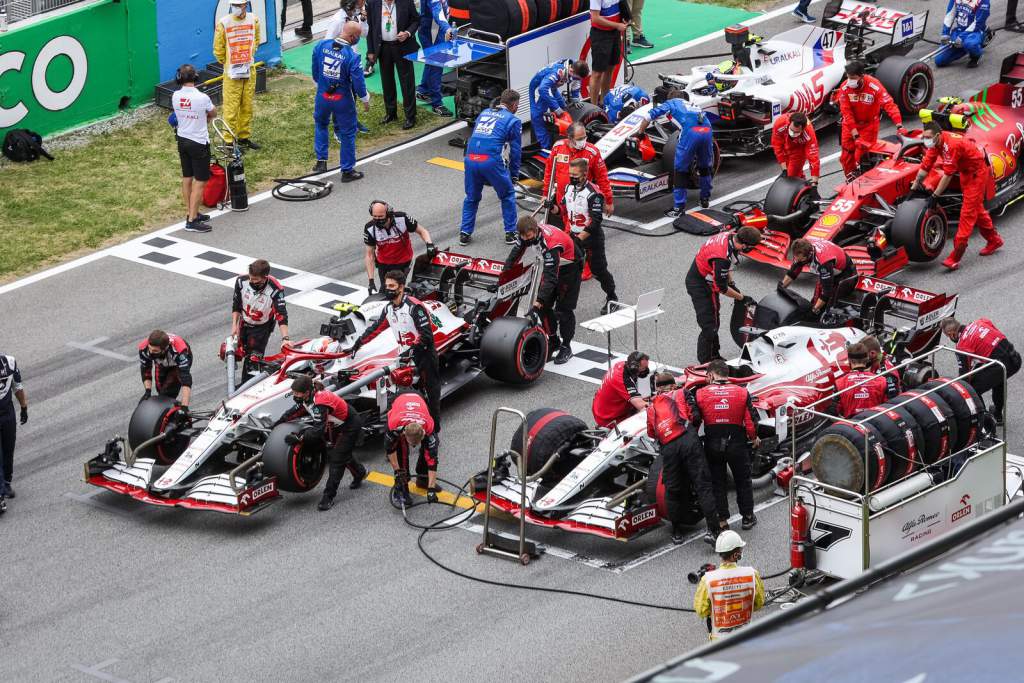 “If I watch my first season in Formula 1, was not ideal because the competition was too big from him. But now I am improving a lot, especially in race pace where I was missing compared to Kimi in the first season and I think the pieces are coming together. In qualifying, I was always there and now in the race I am much better – and I can still improve.”

The 27-year-old’s Formula 1 career remains in the balance. It’s unclear how his current team will line up next year, especially with the Alfa Romeo deal in its final year and expected by many not to continue. 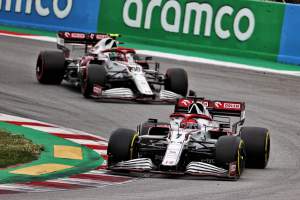 He remains under contract to Ferrari, and highly respected for his contributions as simulator driver before he was placed with Alfa Romeo in 2019, but if he can sustain his current performance level this year – ideally with tangible results not denied him by external factors – he will maximise his chances of staying on the grid.

But Giovinazzi is used to this uncertainty. In racing terms, he comes from a modest background and his progress from karting through the junior categories was always based on achievement. He’s certainly proved himself capable in F1, although he’s yet to pull off many moments of magic – something that Alfa Romeo benefitted from in 2018 with Charles Leclerc, but has lacked since.

With an Alfa Romeo that’s a little more competitive this year and consistent across a range of conditions, both Giovinazzi and Raikkonen will spend a lot of time running just outside the top 10 this year. For Giovinazzi in particular, more thrusting drives to turn 11ths and 12ths into ninths and 10ths will grab the attention and perhaps mean he isn’t underestimated. And in doing so, boost his chances of being on the grid next year. 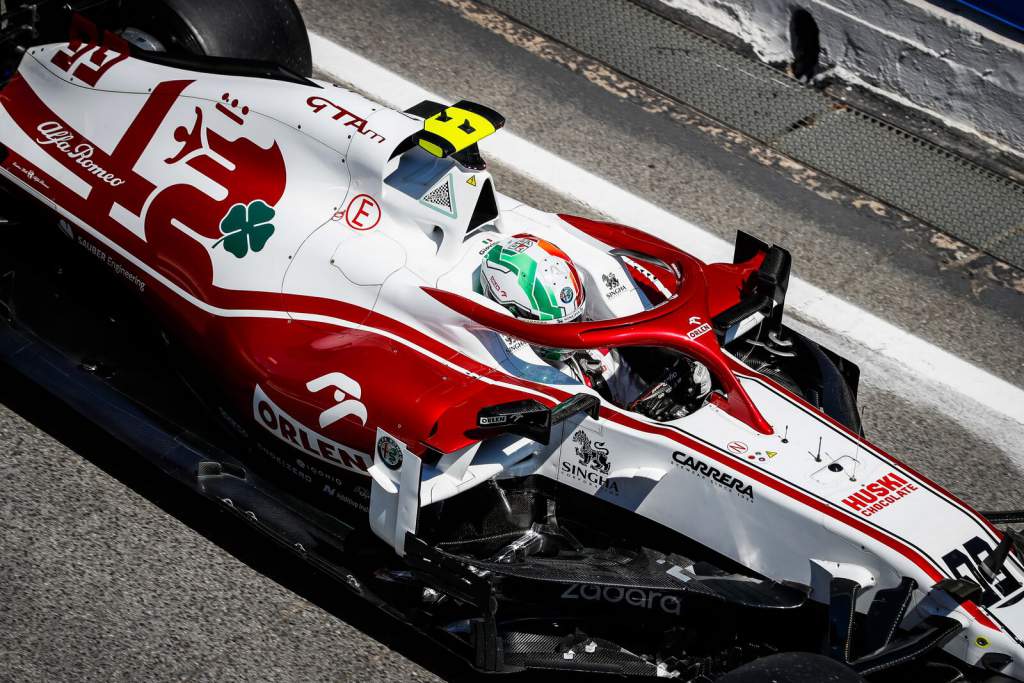 “I’ve felt the same pressure since my first season in F1,’ says Giovinazzi. “Every season is important to stay here and I know that to stay here I need to show that I am fast and a good driver – and this is what I’m doing.

“I’m just improving myself season after season. Also, I have a target – try to be more in front of Kimi in qualifying and the race and this is what I’m doing. So we will see what happens, but I don’t think about the future for now. I will do my best to keep improving and stay next year.” 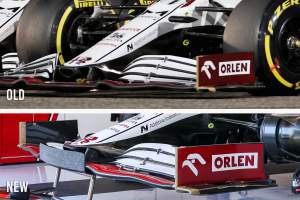 Gary Anderson: How Alfa has gone back in time with front wing
Read more

Giovinazzi has also grown into his role as an Alfa Romeo driver. Given he has alongside him a team-mate in Raikkonen who gives exceptionally precise feedback, it’s no surprise that he very much felt like the junior partner early on.

But Giovinazzi is also strong in this department, and over time has developed a stronger voice in getting the car working the way he wants it. For Raikkonen, it’s all about front-axle sensitivity and feel, whereas Giovinazzi is a little more conventional and likes a hint of controllable oversteer so he can feel the rear of the car on entry.

In his first season, you would often see him experimenting with wildly contrasting corner approaches from trackside. This season, helped by an Alfa that is well balanced, if a little light of downforce, he’s able to drive it his way.

“The first season, I was trying to follow Kimi – he was a good reference,” says Giovinazzi. “I knew that he was good in development of the car, but then I started to understand his way was not actually the best way for me. 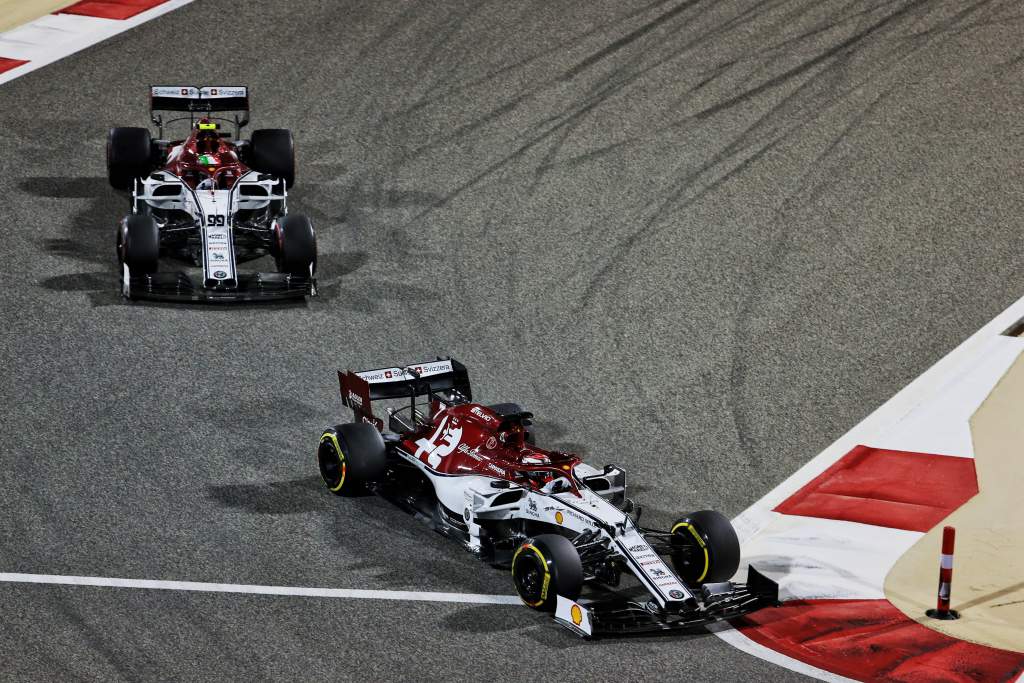 “I started to change. We are not really far away in driving style, but in the end we want different things, like every driver.

“From my side, it is pretty important to feel the rear, and he [is] opposite, he wants to feel the front. Every driver wants something different, but it’s important is to understand what you need to go faster.”

Giovinazzi feels everything is coming more naturally to him now, which is down to a combination of factors including getting the car feel more to his liking. He has experience, the knowledge that he’s capable of being quicker than a world champion team-mate, and has shown himself adept in battle.

And if the errors in races – not just the big ones such as crashing out at Spa in each of the last two years but also the minor ones that previously cropped up a little too often – really have been eliminated for good then he should have moments this season when he can find that little bit extra to deliver points.

Until he does that, he might have to tolerate being underestimated. It’s the fate of any driver who performs at a good, but not great level, to have to fight to stay on the grid and Giovinazzi is happy to prove himself over the rest of the season. As he points out, it’s a results-based business and by being in a car that’s just outside the points, in terms of all-round performance perhaps the seventh- or eighth-best car, he at least has the platform to catch the attention when he does break into the points. 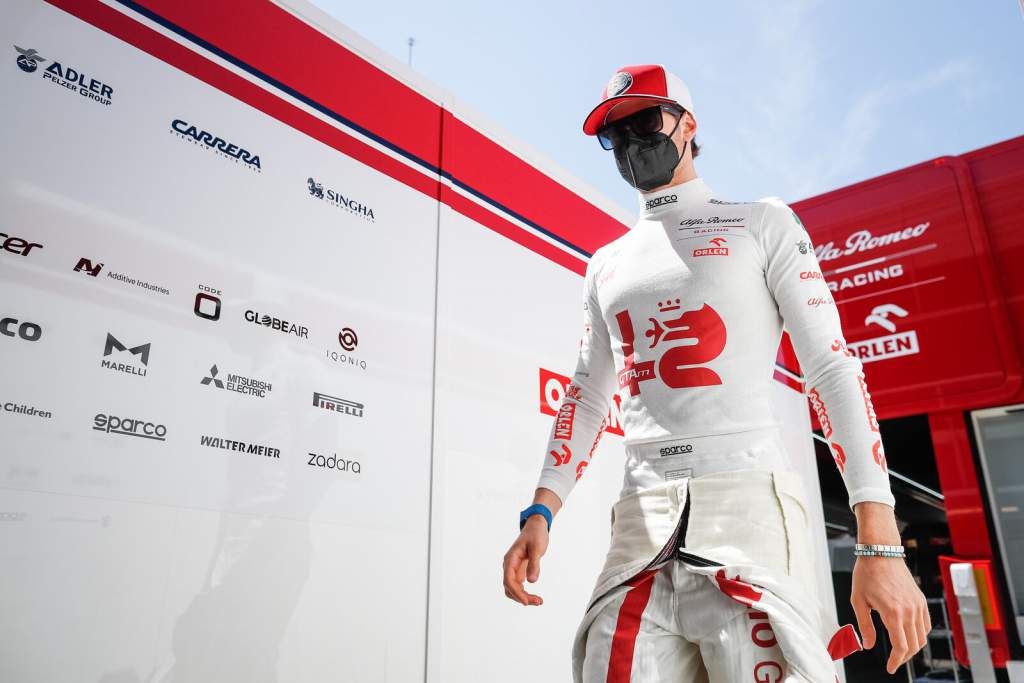 “Formula 1 is like this, the main thing is the results,” he says. “So if you have a great result, your name is going up, so I just need to do my best and hope that I can be raised up.

“Just a few people know when you are in the best level, what you are doing. I have great support for me from Alfa Romeo and also Ferrari, they know what is happening to me and if I am growing up as a driver. The top people know.”

What’s clear is that Giovinazzi is a decent F1 driver. His challenge over the coming months is to prove he’s more than that and show he merits an extended stay, be it with his current team or elsewhere.