The improbable survival of a 30-race F1 streak

When George Russell understeered into the gravel at Mugello’s Savelli left-hander on his final Q1 lap, his remarkable streak of outqualifying his team-mate appeared to have come to an end at 29. But despite the time lost and floor damage sustained, he pressed on to improve his time and pipped Williams team-mate Nicholas Latifi by just 0.088s in qualifying for the Tuscan Grand Prix.

Russell was disappointed to miss out on Q2, which was achievable had he not made the mistake in the middle of the lap then carried minor damage for the rest of it given he lapped only six-hundredths slower than the slowest to advance – Sebastian Vettel. But while 18th place was not the optimum qualifying result, preserving his qualifying record was still an achievement. 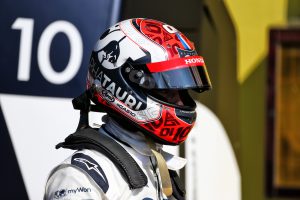 Latifi, who took over from Robert Kubica alongside Russell this season, outpaced Russell on the first two Q1 so would have been the lead Williams had his team-mate not kept his foot in and completed that unlikely lap.

“It was a surprise it wasn’t a lap-ruining mistake, I have to say, the fact that he actually kept on and I think he lost a tenth, maybe a tenth-and-a-half,” said Williams head of vehicle performance Dave Robson.

“But the fact that the car and the tyres were still happy to complete the rest of the lap was actually pretty impressive and a bit surprising.

“I guess it was a bit frustrating, the time he lost there, and I think he probably lost a little bit of time with Lewis [Hamilton, who was ahead on track] in the final corner as well. I think he definitely could have got through [to Q2].”

Russell shared that disappointment, telling the team over the radio “not enough, not enough, sorry, guys” after finishing that lap despite the fact he was still ranked high enough to have advanced before being shuffled down the order.

“Definitely,” said Russell when asked if the off cost him a place in Q2.

“The lap was absolutely on it until that point, the car felt great. It was only my third lap today and I put everything on the line.

If in doubt, go flat out!

“Nicholas was ahead of me in the first two runs. I knew that if I didn’t put everything together in that lap, he could’ve outqualified me, and I thought I threw it away.

“I damaged the car after that off, the rear floor was hanging a little. It would have been a great way to reward the boys, they deserved it after all the work they did repairing my car after P3.

“Nevertheless, considering it was my third lap today I think it was a good job.”

Robson confirmed that the car did sustain some damage as there was “quite a big bang coming back onto the track”. The team subsequently checked the loads seen by the suspension as well as the floor ahead of possible component changes that will be permitted under parc ferme ahead of the race.

The repair job Russell referred to came after he missed FP3 thanks to suffering what he initially incorrectly reported over the radio as a failure of the brake-by-wire system, given the feel was similar to a problem he had encountered before.

But while that was caused by a sensor failure that put the brake system into a failsafe mode and could quickly be fixed, at Mugello it was a physical problem caused by the loss of hydraulic brake fluid serving the rear callipers.

While it was relatively straightforward to repair in itself, it took time to access and then re-assemble the car, meaning it was a significant job for the team in the two-hour gap between FP3 and qualifying.

“It wasn’t actually the brake-by-wire as such,” said Robson when asked by The Race about the problem.

“We lost some fluid from the rear brake circuit, which was the main problem. Annoyingly, one of those things is actually a fairly small component that let us down, just very deep within the bowels of the rear suspension, which meant a lot of work to fix it.”

As a result of having only one car running in FP3, Williams modified its run plan to ensure team-mate Nicholas Latifi completed some of the work originally earmarked for Russell. This included evaluating set-up changes made overnight, and meant Russell went into Q1 with what he described as a “massive set-up change”.

F1 rookie Latifi’s qualifying performance for much of the season have looked poor in comparison to Russell’s, but his underlying pace has been better than the timing sheets on Saturday afternoons suggested.

At Mugello, he showed his strongest pace relative to Russell, having been ahead on the first two qualifying runs, first by a tenth of a second then by 0.155s before understeer on his final lap prevented him improving and led to him slipping behind.

On average, Latifi is just over half-a-second off Russell in qualifying so far this year, but he reduced the gap to 0.088s at Mugello, having been only 0.130s off at Monza.

“He is getting better and better,” said Robson when asked about Latifi’s qualifying progress.

“Obviously, he had to take over the reins this morning. He was very good at adapting to that and picking up the best most important test for the team.

“Getting to do the runs did build the momentum going into qualifying that George didn’t have, but he did a very good job.

“His first run was Q1 was very good and he was able to chip away at it. Unfortunately for him, on that final lap I think some of the understeer was because probably we misjudged how much front wing to add during the session, which is one of those things that I think in other circuits we would have had a better idea of.

“But on top of that, I think he didn’t quite get the tyre preparation he was after just with a little bit of traffic.”

While this improvement didn’t add up to his best qualifying performance in terms of position given he reached Q2 in Hungary, it does suggest Russell will be under pressure as he bids to extend his qualifying ‘victory’ streak over the rest of the season.