The full extent of the clampdown to save F1’s manufacturers

Honda had tentatively committed its future to F1 late last year by extending its original Red Bull agreement to 2021, but further discussions were required to keep the Japanese manufacturer involved beyond that.

Cost savings were at the heart of that debate, but Honda was not the only manufacturer in this position.

Renault has been vocal about its desire to avoid an arms race. Even Mercedes, the all-conquering team since 2014 and an engine supplier in F1 for almost three decades, wanted to bring costs down. Daimler’s net spend on its ultra-successful F1 programme is impressively low, but reducing the cost to nothing has been Mercedes’ aim.

Ferrari’s privileged financial position in the championship makes its case much easier, but one or two manufacturers supplying the whole grid would make for a pale imitation of F1.

However, sweeping changes, some of which are effective immediately, will help make staying in F1 much easier to justify for all manufacturers: starting with a move towards freezing the engines.

From 2020 to 2025, before the next-generation engine is intended to be introduced, the four manufacturers will only be able to supply a certain number of specifications of power unit elements.

Manufacturers generally aimed for two upgrades per season and then a bigger step over the winter, although Honda has gone beyond this in the last two years in a bid to catch up with Mercedes and Ferrari.

As the above table shows, this year no changes will be allowed for major combustion engine components, the turbocharger, MGU-H or fuel and engine oil. These have been vital areas for improvement in recent years.

Only one change will be permitted for the MGU-K, control electronics and energy store, but these cannot be changed again before the end of 2021.

Manufacturers will be allowed to make one change to ICE components, the turbo, MGU-H and fuel/engine oil between the start of the 2021 season and the end, and the same again for 2022 and 2023.

One change for the MGU-K, control electronics and energy store will be permitted across 2022 and 2023. 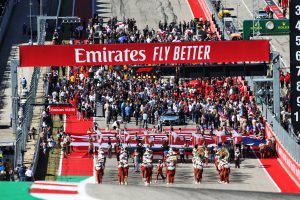 From 2024, two years before the next engine formula is introduced, no changes will be permitted at all, freezing the engine specifications with exceptions only made for the “sole purposes of reliability, safety, cost saving, car installation and supply issues”.

It remains to be seen whether any manufacturer will be tempted to slip through a performance upgrade under the pretence of something else. But as any request on these grounds will be circulated to all manufacturers for comment, is seems unlikely.

F1’s V6 turbo-hybrid battleground will be frozen, much like the V8 era that came before it.

But these changes are reinforced by even stricter dyno testing limitations than had already been planned, and applying them to 2020 as well.

A limitation of nine test benches – where manufacturers can test a fired engine with more than 1 cylinder, or a fired engine and transmission can be tested together (including full car dynos) – is now in place and will remain until the end of the 2025 season.

For the remainder of 2020, manufacturers will be limited to just 600 operational hours of their test benches, a reduced amount to cover the final 30 weeks of the year.

The base limit will be set at 800 operational hours for the whole of 2021, considerably lower than the 1250 hours that had originally been outlined for next year.

It was originally going to be 1000 hours for each season in this four-year period.

Occupancy hours – how much time can be spent working in the test bench facility, as opposed to operating them – are also being restricted, and outlined in the table below.

If a manufacturer has a customer that designs its own gearbox or exhaust, or has its own fuel or oil supplier, that manufacturer is allowed 30 additional operational hours per year, per customer team exclusively for testing these specific items.

An extra 30 hours will be granted if the FIA gives approval for a specification change in fuel or oil. As previously documented, fuel and oil upgrades will now be limited to one per season after 2020 anyway.

In addition, specific limits are now in place for development of a manufacturer’s energy recovery systems.

Like the power unit development, an ERS limit was set to be introduced in 2021 anyway with only four test benches and 500 operational hours permitted.

Restrictions will also be adapted for the remainder of 2020, with just 270 hours permitted.

Car development will be further managed in the short-term through homologated components, although this system requires its own explanation – such is the extent of this clampdown – and this is focused on smaller short-term savings. You can read our full breakdown of that element of the rule changes on The Race in the coming days.

Cutting back engine development without sacrificing performance relative to their competitors is a major step for F1’s four manufacturers, and a boost for the future of at least two of them.

With no new engine makers on the horizon, thanks to the expense and complexity that have accompanied the V6 turbo-hybrid era, this was a vital step for F1 to take.