The British Grand Prix as it happened

The 2020 British Grand Prix was looking very flat – until the final laps when it went crazy.

Here’s how it all unfolded:

Before the start: Pre-race heartbreak for Nico Hulkenberg as a problem with his Racing Point means he can’t even join the grid. He becomes the first retirement even before the formation lap.

Tyre choices: Everyone is using mediums except the McLarens, Renaults and Vettel.

Start: Bottas gets away slightly better and has the inside line for Abbey, but Hamilton holds the lead on the outside. Verstappen manages to claim third after an early battle with Leclerc.

Scott Mitchell: “Verstappen had to get out of the throttle between Turns 1 and 2 as he looked inside Bottas, which allowed Leclerc to get ahead – Verstappen did well to regain composure and control of the car exiting Village and reclaim third.”

Lap 1: Magnussen and Albon collide coming through Club, sending 12th-placed Magnussen into the wall and out of the race. The safety car comes out.

Lap 2: Albon and Red Bull discuss over the radio whether there’s any damage to his car. The team asks Albon to report any “weird” feelings.

Lap 6: Albon pits and swaps to hard tyres, having reported damage to a wheel. His collision with Magnussen is being investigated by the stewards. He rejoins last, 17s behind 18th-placed Latifi.

Scott Mitchell: “Norris has the unenviable task of managing the sensitive front left while keeping the faster car of Stroll behind him – he said it would be a ‘struggle'”.

Lap 12: Kvyat has a huge crash at the first part of Becketts. He climbs out of the car unaided. The safety car comes out.

Lap 13: Hamilton, Bottas, Verstappen, Leclerc, Sainz and Stroll, who didn’t manage to get in on the previous lap, pit now. Only Grosjean has stayed out completely. Everyone else is now on hards.

Scott Mitchell: “That is about as furious and animated as we will ever hear Kimi Raikkonen over the radio! Livid with the decision and the communication around his pitstop, practically spat his swear word at the team. Fire from the Iceman, who is 16th.”

This is likely to be a long safety car period given the amount of debris.

Scott Mitchell: “Barring anything dramatic, further safety cars or what have you, this is now a race to the end on the hards. In the spirit of trying to tempt fate, I bet nothing else happens today.”

Lap 19: The safety car comes in again. Hamilton and Bottas make an immediate break from the rest of the field. Amid busy racing in the upper midfield, Norris gets past Ricciardo for seventh.

Lap 20: Albon is given a five-second penalty for his collision with Magnussen.

Scott Mitchell: “A time penalty for Albon?! (Insert massive sigh). More consequence-based decision-making. Magnussen made an error and Albon had momentum, he’s entitled to go for it. Door slammed shut, racing incident. This is silly now.”

Lap 21: Sainz is frantically trying to pass Grosjean for fifth, and is highly frustrated with the Haas driver’s defence.

Edd Straw: “Last time out in Hungary, Leclerc helped out Haas by being a rolling roadblock as his Ferrari sank through the field. This time, Grosjean is helping Leclerc by holding up the McLarens on his starting set of Pirellis.”

Lap 22: Sainz now makes it past Grosjean for fifth into Stowe.

Lap 26: The black and white warning flag is shown to Grosjean over his defensive moves against Sainz.

Lap 27: Ocon is all over Stroll for ninth, but is being resisted.

Lap 30: Grosjean hasn’t been left behind by Norris, but has Ricciardo, Stroll, Ocon, Vettel, Gasly and Giovinazzi in a train behind him.

Scott Mitchell: “Not sure if Grosjean’s heading down a cul-de-sac with this strategy and just has to hope an avenue opens up for him, but I’m a big fan of the effort and he’s doing a really good job of holding position!”

Lap 30: Albon makes a second pitstop, in which he also takes his 5s penalty. He rejoins last, but has switched to fresh mediums so has a big tyre advantage over those ahead.

Lap 33: Latifi goes around the outside of Raikkonen at Stowe to take 15th.

Lap 36: Giovinazzi, currently 13th and 3s ahead of Russell, gets a 5s penalty for a safety car infringement.

Lap 36: Ricciardo passes Grosjean for seventh into Brooklands. Grosjean then makes his pitstop and rejoins on hards in last place. Ricciardo describes Grosjean’s defence as “sketchy”, and the stewards say the incident has been ‘noted’.

Lap 38: Gasly overtakes Vettel and pushes the Ferrari down to 11th. The AlphaTauri started the move on the outside of Stowe, running wide over the kerbs onto the runoff, and completed it into Village.

Lap 40: Albon storms past Raikkonen into 15th as he begins regaining ground on his new tyres.

Lap 41: Verstappen, who is 13s off the lead in third, sets a new fastest lap of 1m29.070s. The Mercedes drivers had been exchanging the fastest lap bonus for most of the race so far.

Lap 42: Albon gains another place by taking 14th from Latifi. Giovinazzi and Russell are now 3s ahead of him.

Lap 43: The gap between the two Mercedes is up to 3s, with Bottas complaining of a vibration over the radio. Both Mercedes’ right front tyres are showing signs of blistering.

Lap 45: Albon’s charge continues as moves on Russell and Giovinazzi take him up to 12th. At the back, Raikkonen falls behind Grosjean into last place.

Lap 46: Ocon finally makes it past Stroll into eighth.

Lap 47: Norris encourages McLaren to tell Sainz to “get a move on” as seventh-placed Ricciardo catches them both.

Lap 47: Albon sets a new fastest lap as he closes on Vettel for 11th.

Lap 48: Verstappen is now lapping 2s per lap faster than Bottas, and has got the gap down to 7s.

Lap 48: Raikkonen loses part of his front wing and pits for repairs.

Lap 49: Ricciardo splits the McLarens by passing Norris for sixth.

Lap 50: Bottas’s vibrating tyre gives way just after he passed the pit entrance. He has to limp right around to the pits on three wheels and tumbles outside the points.

Lap 52: Leader Hamilton’s left-front tyre gives way too! He has to nurse the car on three wheels for half a lap but hangs on to win by 5.9s over Verstappen.

Leclerc is elevated to the podium by the late drama, ahead of Ricciardo and Norris.

Bottas ends up 11th, held out of the points by Vettel, with Sainz dropping to 13th.

Scott Mitchell: “I have no words for that. Hamilton’s been ordered to stop the car after the flag… What a ridiculous ending.

“Hamilton says ‘the tyre was feeling fine, I must have hit something on the track’. There’ll be a big Pirelli inquest into this late spate of failures. Very costly, and very dangerous too.” 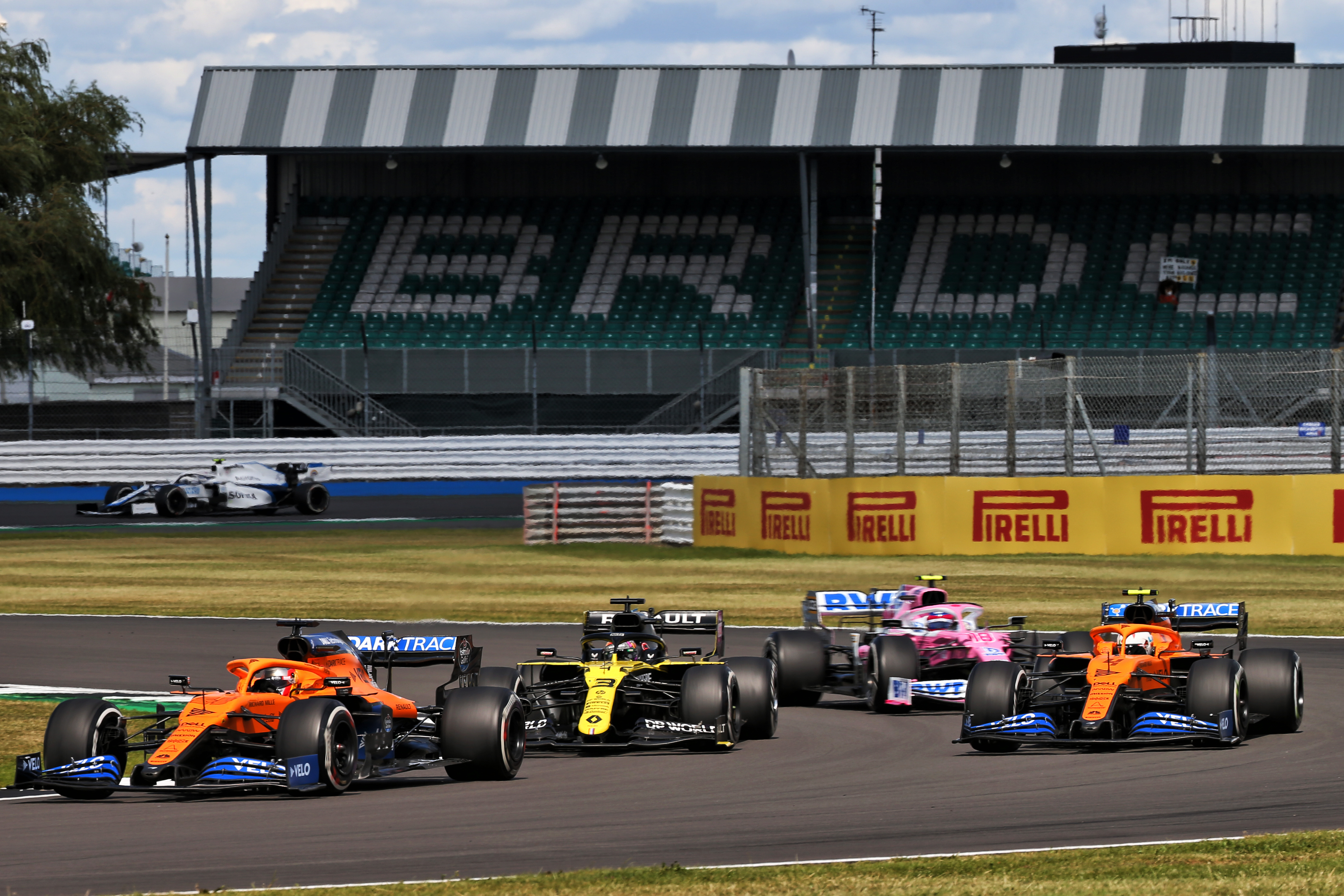