The 5.6-second zenith of the Hamilton-Mercedes juggernaut - The Race
Skip to content
Formula 1

The 5.6-second zenith of the Hamilton-Mercedes juggernaut

The extent of Mercedes’ performance advantage and Lewis Hamilton’s commanding form was laid bare by around five and a half seconds of empty track during the Hungarian Grand Prix.

That was the roughly the amount of time between Hamilton approaching Turn 1 after taking a free pitstop five laps from the end, and Max Verstappen arriving at the same corner.

It was a pitstop Hamilton didn’t have to make at all and yet had nearly made several laps earlier, as Mercedes funnelled itself into a decision it had effectively ruled out before the race started. 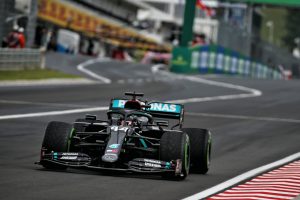 Can Mercedes make 2020 a clean sweep? Our verdict
Read more

But that small confusion was just a small sub-plot to Mercedes’ enormous advantage over Red Bull, and Hamilton’s peerless drive at the Hungaroring, which meant the six-time world champion was able to build a pitstop’s advantage plus a decent margin, and could stop for soft tyres and emerge 5.6s clear of Verstappen.

The reward for that superiority was Hamilton’s free shot at beating team-mate Valtteri Bottas’s fastest lap, which he achieved by two tenths of a second despite nearly tripping up over Sergio Perez’s Racing Point in the final sector.

To make sure of the bonus point, Hamilton pumped in a lap time another 0.8s faster on the final lap.

“I know what it’s like to lose a world championship by one point. And I’m not giving up any unless I have to.”

The margin Hamilton created and the decision to make the pitstop late on, and eventually go for fastest lap, showed the new championship leader will leave absolutely nothing to chance in the title fight.

But Mercedes has been so successful because it has the same philosophy, and that usually means shunning needless risks. A late pitstop from a comfortable position can become exactly that.

A slightly puzzled Hamilton then asked “what’s going on guys?” and Peter Bonnington admitted in response: “Standby, I need to find out myself.”

Will there be a problem on pitlane entry? Will the pitstop be OK? Will rejoining in traffic be a problem? Will there be consequences from pushing for the fastest lap, either encouraging driver error or leaning unnecessarily on the car or engine and triggering a fault?

“Our communications was not great around that because in the morning, we agreed that we wouldn’t pit for the quickest lap and it was bearing too much risk,” said Mercedes team boss Toto Wolff on Sunday evening.

It is testament to how strong Mercedes’ race turned out to be, and the team’s confidence in its crew and driver, that it did eventually decide to execute the late stop.

“We have experienced it before,” said Hamilton. “I know from experience how to manage it and not take too much risk that I lose everything.

“And I trust implicitly the team in terms of their calls and the pitstop crew.

“So, I think it was the right choice.”

The path to that choice was not straightforward, though. With around 10 laps to go Hamilton was told he’d likely be taking the free stop he had earned, which would put him three seconds clear of Verstappen – and he’d be switching to the hard tyre. 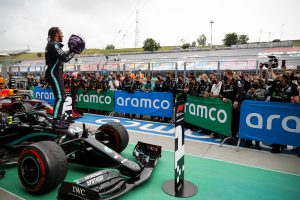 Mercedes’ thinking at that time, said technical director James Allison after the race, was that “if there was any sort of safety car, we would be on fresh tyres that would restart easily on the track and it just felt like a good way of insulating Lewis from any of the hits that can take a leader down”.

But in the moment, when he was told about the plan to put hard tyres on, Hamilton questioned the logic and asked if a set of softs was available.

The reply was “we don’t think that’s a good tyre at all” but Hamilton contested that 10 laps should be fine – “it will grain after three laps”, he was told, so Hamilton relented.

Then Mercedes started to change its mind, and a lap later asked Hamilton if he wanted to stop or the tyres could go to the end. He replied that the tyres were fine but then mentioned the softs again, this time in the context of fastest lap.

A slightly puzzled Hamilton then asked “what’s going on guys?” and Peter Bonnington admitted in response: “Standby, I need to find out myself.”

Later on, team boss Toto Wolff would describe this “bit of confusion” as something that gave Mercedes “a lot to learn from the intercom conversation that we had in the garage and the communication to the driver”.

Hamilton was told to stay out because the team decided to switch to the soft tyre after all, and wanted to give him more margin to Verstappen.

With five laps remaining he said he wanted to box and pit at the end of the lap, rejoining with that impressive 5.6s to spare and posting the fastest lap of the race – twice.

In all likelihood, Hamilton could have used the hard tyres to get that bonus point, but enough time had passed that it became a non-issue. What precautionary thinking was behind not considering the soft with 10 laps to was no longer a concern.

“Once we started chatting about it and putting the idea to Lewis, it allowed time to dribble by and wound up being a significantly short number of laps that you could pop a soft on instead of a hard,” said Allison.

The discussion was never originally about securing the fastest lap, but that’s what it turned into

“And at that point with the soft on, everyone’s thoughts turned to fastest lap instead of just protecting against the safety car.

“Then we find ourselves going for a fastest lap, which we sort of talked ourselves out of before the race.

“We found ourselves funnelled into that way of thinking, not necessarily in perhaps as organised a fashion as we might have liked.”

A seriously impressive component to this not derailing Mercedes was Hamilton’s ability to participate fully in the discussion about which tyres to switch to, while navigating traffic and trying to eke out his advantage over Verstappen on such old rubber.

By the time of the first communication he was 25 seconds clear of the Red Bull. Hamilton pulled another 2.5s on Verstappen by the time he stopped six laps later.

“A surprising amount of spare capacity,” said Allison. “I think all the truly great drivers can pedal the car along at warp speed and talk to you as if you’re eating dinner with them.”

The discussion was never originally about securing the fastest lap, but that’s what it turned into. Traffic on the first attempt, including a particularly close run behind Perez, meant he only had a small margin – so Hamilton decided to push again on the very last lap.

“I was like, I gotta do it again just in case it gets nipped,” said Hamilton.

“Because I would have not been happy if I came across the line and I lost that one point because I didn’t push enough.”

In the end, the final lap was quite straightforward. But the 66 laps to get to the stage where a free pitstop, a switch to soft tyres, and the bonus point were all on the table, with a tidy 5.6s margin for error?

That was where the Hamilton-Mercedes juggernaut showed its true strength.