Ferrari will introduce its new upgraded Formula 1 hybrid system – believed to be worth 8-9bhp – at this weekend’s Russian Grand Prix in Charles Leclerc’s car, meaning he will start from the back of the grid at Sochi.

Ferrari confirmed the plan in its Russian Grand Prix event preview, with a decision to be made on when to introduce the new hybrid system to team-mate Carlos Sainz’s car to “be decided following an evaluation of the right compromise between competitiveness and the impact of the penalty”.

The Race understands Sainz could get the upgrade in Turkey. 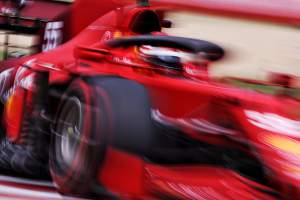 While F1 power units are homologated, the regulations allow one change in specification per year that does not necessarily have to be introduced at the start of the season.

Ferrari is therefore able to make changes to components including the energy store that it did not modify earlier this year.

Team principal Mattia Binotto said during the recent Italian Grand Prix weekend that he was unsure of when the upgrade would be introduced, partly because of concerns about having the required safety approvals for transportation, but he has described it as a “significant step for the end of the season and gaining experience for ’22.”

The introduction of the upgraded hybrid system being introduced on Leclerc’s car at Sochi is a consequence of the damage suffered by Leclerc’s battery pack in the first-corner accident at the Hungarian Grand Prix after he was hit by Lance Stroll.

“The decision is a precautionary measure relating to the potential risk of using the battery pack damaged in his Hungary Grand Prix accident,” said Ferrari’s preview.

“In Sochi, Leclerc will have a brand new power unit and will therefore start from the back of the grid.”